The title of this article is ambiguous. Further meanings are listed under Sanok (disambiguation) .

Sanok, seen from Kosciuszkostraße
the salt mountains in the background (Jun. 2014) 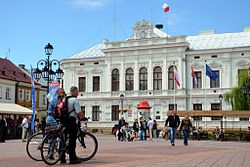 Town hall seat of the mayor on the market square (Rynek) of Sanok (Jun. 2014)

Landesstrasse 28 and 84 currently run through the city center. The national road 28 leads west to Krosno and east to Przemyśl and Lemberg .

From the 10th century , the left lendians ( Lendizi ) permanently settled there.

Already between the late 3rd century BC. BC and 8th century there was a castle on the site of today's Sanok, in the 12th century it was " the gateway to Hungary ". The castle was first mentioned in 1150, at that time the area was part of the Kievan Rus . It records the conquest of the castle and its surroundings by the Hungarian King Géza II .

In the middle of the 12th century, a castle was built on the site of today's Sanok; it also served as an administrative center for the surrounding area. In 1205 the Hungarian King Andrew II met here with Anna, a princess of Russia. In 1231 the area of ​​the city was united with a Rus principality to form the Principality of Sanok-Volhynia .

On January 20, 1339 the city received the city charter by Magdeburg Law from the Halitscher Prince Bolesław Jerzy II Trojdenowicz awarded. A year later the town became part of the Duchy of Przemyśl .

The city's heyday began in the 14th century and continued into the 16th century. In 1344, during the expansion of Poland under Casimir the Great , Sanok also became part of the Polish kingdom. On April 25, 1366, Casimir confirmed the town charter. At that time, the city became the capital of the Sanok Land , which stretched from the sources of the San to the cities of Błażowa and Krosno . This area is in turn part of the Ruthenian Voivodeship . The castle was the seat of the regional and district court and other administrative authorities.

In 1368 the city was given the right to hold an eight-day fair every year from the Friday before Pentecost . In 1377, Wladislaus II of Opole invited Franciscans to Sanok, who finally founded a monastery within the city ​​walls in 1384 . At the beginning of the 15th century, the place received the right to another fair on the day of the birth of Mary on September 8th. On May 2, 1417, the Polish king Władysław II. Jagiełło married in the parish church of Sanok Elisabeth von Pilitza . After Wladyslaw's death in 1434, his last wife, Sophie Holszańska , retired to Sanok Castle.

The first great fire raged in 1470. In 1487 a hospital was donated that uses the Franciscan buildings. In 1498 another fire raged in the city and destroyed large parts. In 1514 it burned again. In the same year Sigismund the Elder exempted the city from some taxes and approved another fair.

In 1523–1548 the Gothic castle was rebuilt in the Renaissance style . In 1549 another fire struck the city. In 1566, a great fire broke out and eventually left almost the entire city to rubble and ashes. Only the castle, the Franciscan monastery , five houses and the upper part of the city were spared.

In 1624 the city was attacked by Tatars . In 1640 a Franciscan monastery was built in the baroque style. During the Swedish-Polish war , Sanok was also attacked by the Swedes. Shortly afterwards, in 1657, the army under George II Rákóczi from Transylvania reached the city.

As a result of the first partition of Poland in 1772, the city fell to Austria . It was not until 1798 that Sanok became the seat of a district in the province of Galicia .

In 1782 a fire destroyed the town hall , the parish church and around 70 other houses. Two years later, construction of a church in the classicism style began and was completed in 1789.

Around 1845, Walenty Lipiński and Mateusz Beksiński founded a boiler shop in Sanok, which was expanded into a factory in 1886. From 1894 to 1895 a boiler and mechanical engineering factory was built in the Posada Olchowska district .

Karol Pollak founded a printing company in 1848 , the first issue of the Biblioteka Polska (Polish Library) was printed here in 1855 under the editing of Kazimierz Józef Turowski . Karol Pollak also set up the town's first library in 1861.

The connection to the rail network took place in 1872, so the city had connections to Chyrów and Hungary . In 1874–1878 a new parish church was built.

In 1918 the city fell to the newly acquired Poland . The economy picked up, for example a rubber and an accumulator plant were built. The local history museum was opened in 1934 .

In the course of the German invasion of Poland at the beginning of the Second World War , Sanok was occupied on September 9, 1939. The city was initially a border town between the Soviet-occupied part of Poland and the Generalgouvernement . In 1940 the Polish underground movement began to form. Courier routes to Hungary ran here until 1942, and the Polish Home Army ( Armia Krajowa ) carried out some disruptive maneuvers on site.

The large minorities of the Boyken, Lemken and Ukrainians living in the region around Sanok and within the city were in some cases forced to collaborate with the German occupiers. In 1943 the German occupation forces and the SS authorities ordered the establishment of the Waffen SS Division Galicia . Ukrainians, Lemks and ethnic Germans joined it. On August 3, 1944, the city was captured by the Red Army . The Ukrainian underground army ( UPA ) fought in Bieszczady south of Sanok until 1948. In 1947, the Vistula action led to the forced relocation of the Boyken and Lemken to western Poland.

Due to an administrative reform, Sanok fell on June 2, 1975 under the sovereignty of the Krosno Voivodeship .

On September 29, 1980, an independent trade union was founded in the Autosan bus factory , which marked the beginning of the Solidarność movement in Sanok.

On September 6, 1983, the city became the seat of a new Orthodox diocese . As part of another administrative reform in 1999, Sanok became part of the Subcarpathian Voivodeship .

Today Sanok has about 40,000 inhabitants. A park with an area of ​​approx. 12 hectares, the scenic mountain regions of the Słonne Mountains and numerous sports and leisure opportunities offer recreational opportunities. Tourists who are enthusiastic about icons and wooden Greek Orthodox churches can set off from Sanok on the so-called icon route. One of its attractions is the largest museum of folk architecture in the country, which shows objects of wooden architecture. There are 120 sacred and secular buildings from the 17th to 19th centuries. Your path forks at two rivers and leads along them - the northern part along the San River, the southern part along the Osława River - to the Slovakian border. From here you can take the train to Medzilaborce , Prešov and Budapest .

The city of Sanok forms an independent municipality ( gmina miejska ).

The automotive, chemical and machine industries have a long tradition in Sanok. The bus manufacturer Autosan is continuing the 182 year old tradition of the machine industry in Sanok and is currently producing special vehicles. It was the first company in the machine industry, founded in 1832 by Mateusz Beksiński and Walenty Lipiński as a boiler and tank manufacturer. In the period up to July 1944, 5000 pieces of brand new freight wagons and 180,000 stretchers for the Wehrmacht soldiers were also manufactured. Armored vehicles and self-propelled howitzers were repaired, and Panzer IV was also repaired there. In 1970 the company employed 7,000 people in the automotive industry. Privatization and the crisis in industry and administration have driven the factory into bankruptcy. Autosan is currently bankrupt and has around 380 employees.

The preparations for the balloon launch in 1936 on the Blonie-level / Santal by Dr. Oskar Schmidt (center) in Sanok

The place with the surroundings from Lesko to Gorlice is one of the oldest places in the Sanok lowlands, where the roots of the world oil industry lie. In the forests of the Beskids northwest of the foothills near Sanok, the world's first oil field in Galicia was created by the Galician chemist Ignacy Łukasiewicz and opened in 1854. Oil is still produced there today. The Warsaw energy company PGNiG in the Sanok district runs the business.

The company Stomil has the longest tradition in the production of technical and industrial rubbers in Poland . The Stomil rubber factory was founded in 1932 by the Austrian chemist and entrepreneur Dr. Oskar Schmidt (1902–1976) was founded as the Polish Society for the Rubber Industry - Sanok and, as a plastic and vulcanized rubber, was involved in the manufacture of a wide variety of industrial items, especially for the automotive industry and consumer goods. In 1938 the company had 2000 employees. Stomil continues to produce profile seals for steel and plastic pipes, rubber belts and seals for windows and doors. The company was renamed to Stomil Sanok SA in 1991. In 1994 the company ( SNK ) was listed on the Warsaw Stock Exchange. The rubber plant currently employs more than 1750 people.

The best known local companies are Autosan , Stomil Sanok , PASS-POL , and the natural gas company PGNiG von Sanok. The most important industrial companies in the city in 2013 were: 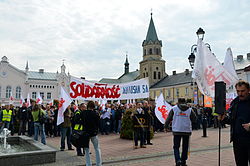 Unions, political parties and workers protest against the closure of the Sanok car plant ( Oct. 2013 )

The former village church of Bączal Dolny,
today in the Museum of Folk Architecture in Sanok (Feb. 2013)

The most famous hockey club in the city is the KH Sanok , which has won the Polish championship several times. The former car club KH Sanok plays its games in the Sanok Arena, which has a capacity of over 3,000 spectators. There is an ice rink in the city. At the ice rink in front of the Sanok Arena in 2013, the final runs for the ice speedway world championship took place.

Through the region leads:

The cycle and long-distance hiking trail "In the footsteps of Schwejk" begins in the Czech Republic and continues to Austria, Hungary, Slovakia, Poland / Sanok to Ukraine.

The oil and gas museum hiking trail . The trail begins in Jasło and leads through Bóbrka, Krosno , Sanok , Lesko , and Ustrzyki Dolne to Ukraine .

Hiking trail in the Beskid Subcarpathian region from Holzkirchen via Sanok to the village church of Bączal Dolny and on to Międzybrodzie - Mrzygłód - Ulucz - Dobra - Hołuczków back to Sanok.

The schools of Sanok: