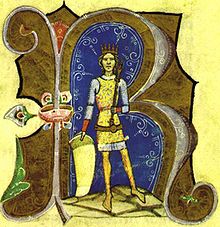 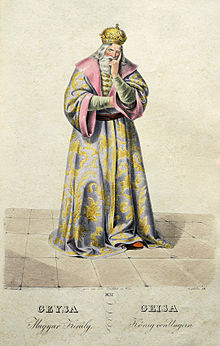 His way to the throne

On February 13, 1141, Béla II died, who had previously had many possible heirs to the throne killed in order to secure the succession to the throne for his son. Géza was crowned on February 16, 1141 in Székesfehérvár . Since he was only eleven years old at the time, his maternal uncle, Belos, ruled instead. He was appointed Ban during Géza's II reign .

Like his father before, Géza II had to contend with the claims to the throne of Boris, a son of Koloman , who he regarded as illegitimate . From 1146 in particular, he began to pursue his claim to the throne more vigorously. During this phase there was a change in the alliance system that had developed in the context of this dispute for the succession to the throne:

The Russian princes switched from Boris' to Géza's side, while Boris, in addition to Poland, also Bohemia , Austria and Bavaria and the German King Konrad III. could win for his side. Konrad was in turn allied with Byzantium , which prompted Géza to lead six campaigns against Byzantine allies among the Russian princes between 1150 and 1156. In addition, the campaigns had the aim of underlining the Hungarian claims to the area around Halitsch that had been made in the years before .

In 1147 the crusaders passed through Hungary, which Géza used to forge an alliance with Louis VII of France .

Géza's reign also saw the first major wave of settlements of an estimated two to three thousand immigrants from the Rhine and Moselle regions as well as from Wallonia . They settled in the east of Hungary, in Transylvania .

The reform of the Hungarian Church under Bishop Lukas von Gran began in the final years of Géza's reign.

Géza was married to Euphrosina of Kiev . He had the following children with her: