The armaments industry , also known as the security and defense industry (SVI) in Germany by its own name , is the branch of industry that produces equipment for the military . The core area is the production of weapons , mobile and stationary weapon systems and ammunition for the fulfillment of sovereign security tasks . However, these only take up a small part of the total volume of goods. The much larger share, and the part of the industry designated as the focus, goes back to the so-called extended area such as communication or monitoring technologies, which are also used in the private sector, e.g. B. be used at airports.

Goods for interdiction and effect

Goods for prevention and operation management

Armaments are produced to guarantee the public good of national defense . The state is responsible for the provision of public goods . A public good is when there is non-excludability from consumption and there is no rivalry in consumption. The efficient provision of armaments is problematic, as these always cause market failure ; due to information asymmetries and external effects .

However, armaments are produced (on behalf of the federal government) by a number of private companies. No complete numbers and names of companies can be found that reveal who belongs to the German arms industry.

“The main difference between the armaments market and other markets is that in most industrialized countries the state is a monopsonist on this market; at most it happens that foreign buyers - mostly governments - are allowed. "

In order to look at the demand side of the armaments industry, a distinction must be made between the German state and the “remaining” demand. The terms monopsony , i.e. demand monopoly and an appearance on the world market are not necessarily mutually exclusive . Because through the War Weapons Control Act , the public sector could generally act as the sole customer in the market, since this specifies which armaments may be manufactured, transported and placed on the market. Nevertheless, the state also has an interest in these goods - under certain conditions - being sold worldwide. There is therefore a mutual dependency. For example, by securing tens of thousands of jobs, maintaining know-how in development and production, and selling those goods.

All companies that produce armaments are organized on a market economy basis. Nevertheless, the supply side of the armaments market has to live with some special features. Depending on how diversified the company's product range is, they are more or less dependent on the state - since only the state is allowed to tender an order for armaments (see: Provision of armaments). If a company exclusively manufactures armaments for military use, the company's order situation is heavily dependent on the respective government; whether they want to spend a lot or little tax money on armaments.

There are laws and regulations that clearly define the field of action in which the arms industry is allowed to operate. The War Weapons Control Act states that certain weapons may only be manufactured, transported and placed on the market with the approval of the federal government. The government is also taking measures to prevent corruption, to regulate German arms exports, or to control if former officials want to switch to the arms industry.

Among other things, the armaments industry is repeatedly criticized because of poor functionality of weapons - such as the G36 assault rifle from Heckler & Koch - or delays in deliveries.

From an economic point of view, these problems can usually be explained by the fact that the awarding of contracts involves public tenders . The economically most advantageous bidder receives the bid from the state and is allowed to produce the armaments. Due to enormous information asymmetries vis-à-vis the respective arms companies, the state can hardly check - and if so, only with high transaction costs - whether the estimated costs or cost increases are legitimate and might not have to be borne by the respective company.

In the case of a small request (increase in the cost of large weapon systems, especially because of the Puma infantry fighting vehicle ) to the Bundestag, the government replied: "Contract penalties are not agreed in the procurement contract, as they were not enforceable in the course of the contract negotiations due to the monopoly of the contractor."

One of the longest and most expensive armaments projects is the Euro Hawk fighter aircraft . The idea of ​​a reconnaissance drone for the German Armed Forces arose in 2000. The American arms company Northrop Grumman and the European aerospace company EADS were involved . Apparently there was early evidence that the drone was nowhere near the required standards for approval. Nevertheless, tax money was still used for the project and further test flights were arranged. The then Defense Minister Thomas de Maizière (CDU) only decided in 2013 to shut down the drone project because it was not foreseeable that it would get approval for German airspace. Until then, the whole thing had cost the German taxpayer around 600 million euros without any benefit.

The armaments industry continued to develop in the course of industrialization in Western Europe in the 19th century. In the beginning there were individual companies, traditionally mostly state-run, that produced firearms . Gradually, large and very diverse large private companies developed such as Rheinmetall and Krupp in Germany, Schneider in France, Škoda in Austria-Hungary, Bethlehem Steel in the United States. In addition to the production of handguns , the manufacture of gun material became more and more important.

The importance of modern weapons became apparent in the Franco-Prussian War of 1870/71 : Alfred Krupp's steel breech- loading guns were the decisive artillery . They could shoot over 4 km (more than double the range possible up to then). The newest of these guns at the time was called the C / 64/67 ; it had numerous advantages. The Battle of Sedan in particular showed that a high rate of fire (up to ten rounds per minute) combined with a long range and good hit performance produced a devastating effect. The French had advantages in range and cadence with the new Chassepot rifle and the Mitrailleuse machine gun . The former was superior to the Prussian breech- loading needle gun .

The invention and further development of the explosive shell around 1890 brought about great upheavals in warfare: 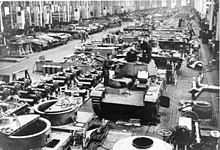 Manufacture of armored vehicles at Rheinmetall in the Third Reich

The arming of the imperial navy before the First World War secured orders for the up-and-coming companies in Germany and supported the expansion of their capacities. In 1898 the Reichstag passed a new naval law which stipulated further expansion. Before 1914, naval requirements were the most advanced armaments sector in terms of technology and innovation. 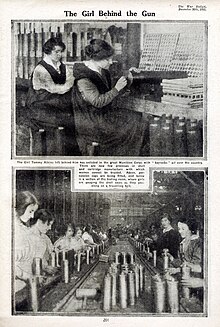 After the First World War, which acted as an enormous pacemaker for new branches of armaments ( aviation industry , motor vehicle industry , tanks , chemical weapons ), Germany's armaments industry was set tight limits in the Treaty of Versailles . Arms production was monitored internationally and arms exports were completely banned. The Nazi regime brought it enormous growth with its armament of the Wehrmacht and its war policy. After the Second World War , the armaments industry was dissolved in 1945 as part of the demilitarization of Germany. In the Federal Republic of Germany, it experienced a new beginning in the mid-1950s as part of western integration and rearmament .

In the past, arms manufacturers had a number of influence on political events in order to improve conditions for their branch of industry. This also resulted in illegal bribes from armaments lobbyists. Well-known examples are the arms dealer Karlheinz Schreiber and the former State Secretary and President of the Federal Office for the Protection of the Constitution Ludwig-Holger Pfahls .

In the ranks of the peace movement , peace research and also the trade unions , concepts have been developed since the 1980s as to how the transition from military to civilian production can be shaped ( armaments conversion ). These concepts are often not implemented, and in some cases the opposite trend can be observed. In the course of the war on terror since 2001 ( 9/11 ), the arms industry expanded. The annual average of international trade in heavy conventional weapons rose by 22 percent between 2005 and 2009 compared to the annual average for the years 2000-2004. Companies that manufacture military and civilian products are trying in part to sell the civilian part of the company (e.g. BAE Systems sold its Airbus stake in 2006) and to increase the military stake. In the German arms sector, the number of employees fell from around 290,000 (1990) to 80,000 in 2002.

Until 2017, due to a lack of data , SIPRI refrained from publishing figures on Chinese arms companies. Only in the publication of the year 2020 did the institute classify the three Chinese companies AVIC , Norinco and CETC in the ten largest arms companies in the world for 2018.

Other important armaments manufacturers are:

The largest arms suppliers in the world are the United States of America, followed by Russia, Germany, France, China and Great Britain. All of these countries have highly developed arms factories and are in competition with one another to develop new and more effective weapons systems. The figures in the following table come from the SIPRI database 2016 and are rounded to billions of US dollars based on 1990 prices.

The following cases, for example, became aware of how problematic an arms export can be:

The export and import of weapons varies greatly from country to country and can in part be avoided by relocating production abroad. In Germany exports are regulated by the Foreign Trade Act and the War Weapons Control Act . The export permit is granted by the Federal Security Council of the Federal Government , which meets in camera. There is no parliamentary control body and arms exports do not require the approval of the Bundestag . The exports made are published once a year in the arms export report.

It should be noted that there are no globally valid standards for recording and publishing arms exports. The Stockholm SIPRI Institute describes z. For example, Germany was the third largest arms exporter in the world for the period from 2003 to 2008, with a market share of 10 percent (after the United States and Russia). On the other hand, a study by the International Institute for Strategic Studies (IISS) puts Germany in fourth place for 2006, well behind Great Britain. Russia 21.5 percent, United Kingdom 12.2 percent).

Armaments include small arms and light weapons, internationally abbreviated as SALW (Small Arms and Light Weapons) . A detailed list of the arms exports, which only include firearms , including civilian hunting and sporting rifles, as well as handguns, can be found here:

In particular, German exports to European customers increased: Compared to the five-year period from 1998 to 2003, according to SIPRI, they increased by 123 percent.

China's defense industry is growing and technologically catching up. Example: China celebrated the first “official” test flight of a stealth bomber ( J-20 ) in January 2011 . The J-20 is similar to the Russian Mig 1.44 (which never went into production) and the US Army's Raptor aircraft.

China is exporting more and more arms and is increasingly competing with the Russian arms industry. The aspiring exporter China has some advantages over Russia. Both countries are primarily targeting emerging economies that are striving for more independence from the West in terms of military policy as a market for their weapons.