The air defense of a ship uses various weapon systems

Following the definition of a general system , a weapon system is a combination of individual technical elements which interact with one another and through this combination achieve an improved weapon effect or even make it possible in the first place.

In individual cases, the question of whether there is a weapon system is not an easy one. The technical interaction in particular is difficult to assess. Usually this goes beyond a trivial technical connection such as the fastening.

The term is sometimes used imprecisely in colloquial language and also varies according to subject area. One reason for this is probably the fact that the associated theoretical principles are rarely taught at publicly accessible institutes. Since the word “system” can have a sales-promoting effect, it is often added for marketing reasons.

When procuring a weapon system (especially by the Federal Office for Equipment, Information Technology and Use of the Bundeswehr ), the term is expanded. The term system does not only mean a single aircraft or vehicle, but also the entire periphery, for example simulators , tools , measuring devices , specially adapted weapons and possibly a stock of spare parts and supplies. Therefore the procurement costs of a weapon system are often much higher than the product of the number and the individual costs.

In the context of considerations of international law, the term "weapon system" was defined as follows in the "HPCR Handbook":

The way to the modern weapon system

The development of weapon systems goes back a long way and is based on the war machines of antiquity and the Middle Ages . The increasingly developed industrialization of the 19th century laid the foundation for the complex and highly technical modern weapon systems and enabled the military to advance in technology with revolutionary effects on warfare . The development of modern weapons systems created an increasing spiral of armament and specialization and forced a rethinking of the military leadership and military theorists.

A technical leap that was initiated during the Second World War was brought about by the development of sensor technology , in connection with the intention of hitting the enemy as far as possible and surprisingly. The location of a target, the processing of the information received and the subsequent and coordinated reaction by the weapon system represent the modern chain of defense. This standardized sequence is often found in the weapon system itself and is performed manually by humans or automated via a processor controlled.

The soldier of the future

Certain types of handguns (especially automatic firearms ) are nowadays also expandable to weapon systems due to modern requirements. As early as the Vietnam War, a combination of assault rifle and grenade launcher was developed to increase the effectiveness of the infantryman when attacking enemy positions. The sensor system does its part because it turns today's infantrymen and their handguns into a cooperating system. Projects to modernize infantry are finding their way into more and more armed forces around the world. The Bundeswehr was one of the first armed forces to look for new ways to obtain better information and increase combat value with its “ infantryman of the future ” . The technical equipment that turns a handgun into a system include, for example, grenade launchers, infrared aiming devices and helmet visors connected to a camera on the weapon . With the latter device, the soldier can, for example, pick up a target from cover or around a corner. Great emphasis is also placed on a modular structure in order to adapt the weapon to the various requirements of the mission in the shortest possible time and with little effort.

It is also colloquially referred to as a “fusion” of humans with machines. A monitoring of the systems by humans is inevitable with all progress. So-called "Human Machine Interfaces" (dt .: Human-Machine Interface ) improve decision-making ability and the corresponding reaction (eg. As the people through enhanced information display head-up display or visor ) and easier operation (z. B. Voice input).

Today's weapon systems can also react to a threat completely autonomously and faster than the human ability to react. The improvement in weapon systems also requires an appropriate response from defensive systems that may be beyond human capabilities. A technological example are so-called close-in-weapon systems (CIWS) such as the Phalanx CIWS or the Goalkeeper , which can destroy several anti-ship missiles approaching the ship at supersonic speed from different directions at a short distance (close-range defense).

These forms of automation enable completely new defense concepts. For example, numerous subordinate and tiered weapon systems are available to the defense and combat system on a modern warship, which are deployed according to the threats. The weapon systems are controlled centrally from the so-called Operations Center (OPZ).

Even unmanned aircraft . (UAV; dt. Drone), vehicles and boats are now equipped with weapons and during unmanned vehicles and boats are to weapon systems of a new species largely still in development or testing, are unmanned and armed aircraft (UCAV, Unmanned Combat Air Vehicle) has already completed its first combat missions. They either fly a preset course or are remote controlled. In the former case, too, constant intervention by a pilot is possible. For example, newly discovered targets can be attacked during a mission. A large number of ground targets in Iraq were destroyed with the MQ-1 Predator drone .

Development programs for unmanned combat aircraft are underway in numerous countries. While the US defense industry is mainly working on the X-45 ( Air Force and Boeing ) and X-47 ( Navy and Northrop Grumman ) projects , various European countries have come together to form two initiatives: the Neuron project and the UCAV- Development of the ETAP .

Purpose in the armed forces

The following lists the areas in which and for what purposes weapon systems are used. The use of the individual weapon systems by the various branches of the armed forces can be different in each state .

Since the complete list of all existing weapon systems is not possible here due to lack of space, only a few representative examples of the individual areas are given below. 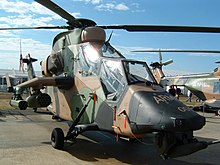 The Multifunctional Utility / Logistics and Equipment