The AK-47 , the most widely used assault rifle in the world

An assault rifle (StGw) is a fully automatic medium caliber firearm . These are relatively light and compact multi-purpose military rifles , which are technically considered machine carbines . This type of rifle is common in most armed forces as the standard armament of the infantry .

The term assault rifle goes back to the propaganda naming of the miracle weapons in the German Reich during the time of National Socialism and was used for the assault rifle 44 (StG 44).

The term assault rifle is not suitable for clearly defining a handgun category from a technical point of view. Most armies simply refer to their ordinance rifles as a rifle within their service regulations . In West German usage, the non-binding designation “assault rifle” has meanwhile become a generic name for light military automatic rifles (such as “ Jeep ” for off-road vehicles or “ Colt ” for revolver). The term “assault rifle” is - despite its incorrect derivation - used today not only in Germany, but also finds its way into the official naming of modern automatic military rifles in German-speaking countries, such as the Swiss Sturmgewehr 57 and the Austrian StG 77 . The English term "assault rifle" is not a direct translation of the German, but goes to the type of use of the machine gun by the German infantry in World War back.

The main functional principles are gas pressure chargers like the AK-47 and recoil chargers with a roller lock like the HK G3 . The number of gas pressure chargers predominates, also for reasons of lower production costs. In contrast to most of the military submachine guns and machine guns , assault rifles usually have shooting systems for greater accuracy with the first or single shot.

From a weaponry point of view, it is a self-loading rifle that has been optimized for rapid individual and fully automatic firing sequences through more or less extensive modifications. These modifications include a fully automatic fire mode (in a number of versions in addition to or instead of the fully automatic fire mode, a burst mode with the controlled delivery of a fixed number of shots - mostly three shots), as well as various changes that make the weapon much easier to handle: interchangeable magazines allow fast Reloading, the pistol grip and special ammunition make the recoil more controllable, flash suppressors reduce the muzzle flash .

These are not exclusive features of the so-called assault rifles . In their entirety alone, they lead to an appearance that has coined the popular collective term assault rifle . It is obvious that there is functional overlap with other types of handguns, or that multiple type designations for similar handguns are in use, such as self-loading rifles, automatic rifles, automatic carbines or light machine guns.

The first assault rifle was developed in 1913 by weapons designer Vladimir Fyodorov in Russia. At that time, he used the Japanese 6.5 mm rifle cartridge of the Arisaka carbine . In this sense, its design, the Automat Fyodorow , was an automatic rifle that fired long cartridges. During the First World War, the capacities of the tsarist arms industry were by no means sufficient to be able to manufacture this weapon and its ammunition in significant numbers. The strategists' lack of insight into the necessity of such a weapon as well as the lack of confidence in the common soldier to handle this “ammunition devouring” weapon responsibly, as well as the insufficient economic power for the production of much more complicated weapons, brought the first self-loading rifles to an early end.

In the 1930s and at the beginning of the Second World War , the Soviet Union also produced semi-automatic and fully automatic rifles ( AWS-36 , SWT-38 and SWT-40 ), but their production was limited in the second half of the war in favor of the tactically more highly valued submachine gun and was eventually discontinued altogether.

The search for a new medium cartridge in advance was decisive for the German developments of the machine carbine (Mkb) and later the assault rifle (StG) . This should be significantly more effective than the pistol ammunition that was fired from the submachine gun MP 38 / MP 40 ( 9 × 19 mm ), but significantly less recoil than the infantry cartridge fired by the Karabiner 98 ( 7.92 × 57 mm IS). This led to the development of the 7.92 × 33 mm cartridge in 1941 , which met the requirements mentioned.

In view of the increasing numerical inferiority of the Wehrmacht , the rapid decline in the number of carefully trained soldiers in peacetime, and under the impression of the superiority of American and Soviet self-loading rifles, the technical upgrading of the individual soldier with a self-loading weapon proved to be absolutely necessary. In firefights, it was found that targeted individual fire was rarely effective at combat distances of over 400 m. The 8 × 57 mm IS rifle cartridge used until then was completely oversized in the 98k carbine with a sight up to 1,800 m. The low rate of fire also did not meet the requirements for trench and house warfare. When used in fully automatic handguns, the hard recoil of the rifle cartridge proved to be fatal for accuracy, especially for inexperienced shooters. The submachine gun (e.g. MP 40), on the other hand, proved to be too inefficient due to its relatively weak pistol ammunition when used against forces armed with self-loading rifles at combat distances above 100 m , among other things in the Battle of Crete . 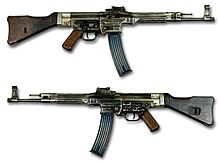 The sum of the above-mentioned knowledge, experience and requirements led to the development of the machine carabiners 42 and 43 (Mkb 42 / Mkb 43), which are mainly manufactured using inexpensive sheet metal stamping technology. Since Hitler initially stubbornly stuck to the combination of the Mauser K98k carbine and the future G43 self-loading rifle and the MP40 submachine gun in the well-known 8 × 57 mm IS and 9 × 19 mm calibers, he forbade all further developments on the so-called "intermediate cartridge". To fool Hitler, the next Mkb was renamed MP 43/1 . Hitler was supposed to assume that it was a submachine gun for the use of the 9 mm Parabellum that was already there; There were no official restrictions for development work in this area. In 1944, after a few changes, the gun was named MP 44 . Due to positive reports about the new weapon from the Eastern Front, the production was placed under special urgency and given the suggestive name Sturmgewehr 44 . Ultimately, the equipment of the Wehrmacht suffered from the scarcity of raw materials in the German Reich and also required a high monthly output of weapons and ammunition for a quick re-armament of the army.

Other constructions, for example the well-known AK-47 (Automat Kalaschnikow) (caliber 7.62 × 39 mm ), adopted the tactical concept on which the StGw 44 is based with their own technology.

At the end of the 1950s, the G3 rifle from Heckler & Koch was introduced into the German armed forces , which goes back to the assault rifle 45 by the two engineers Ludwig Vorgrimler and Wilhelm Stähle. The weapon, a recoil loader with delayed mass locking , did not fire a central cartridge, but again a relatively strong rifle cartridge 7.62 × 51 mm NATO . Like the FN FAL by FN or the American M14 and some other rifles of this caliber, it is called a battle rifle (literally: combat rifle , correct term rapid-fire rifle ) in the English-speaking world, in contrast to assault rifle .

American M16 through the ages

In the 1960s, with the AR 15 (military designation M16 ) developed by Eugene Stoner, the small-caliber 5.56 × 45 mm (.223 Remington) cartridge was introduced in the USA and also as a NATO standard caliber , as the M14 was introduced with the previous one Caliber 7.62 × 51 mm NATO was rated by soldiers in the Vietnam War as too heavy and supposedly not enough ammunition could be carried. This caliber had the advantage over the old caliber (7.62 × 51 mm) that, on the one hand, it had less recoil and the weapon was easier to control, and on the other hand, more ammunition could be carried due to its smaller size and weight. The disadvantage of this ammunition is the lower degree of efficiency, due to the fact that the projectile speed drops more sharply than, for example, the 7.62 mm ammunition, and the lower projectile weight, which leads to a lower target ballistic performance. The tendency towards smaller weapons with shorter barrels also has a negative effect on the ballistic properties of the new projectile. Light machine guns use the assault rifle caliber and allow the shooter much greater mobility.

Fiber-reinforced plastic was increasingly used to make weapons more cost-effective, lighter, more resistant, more corrosion-resistant and dimensionally stable, and thus more precise. The freedom of design is also greater, which can be important in particular with ergonomically shaped parts. Compared to metal, it also feels less hot or cold at high and low temperatures due to its lower thermal conductivity .

At the turn of the millennium, various improvements were sought for the assault rifle : On the one hand, new ammunition was required which would achieve the penetration power of infantry cartridges at short range, but which should combine this with the controllable recoil of previous medium cartridges. Suggestions such as 6.8 mm have not yet become established as the standard. The US Army's Small Arms Master Plan also failed to produce a definitive result in the assault rifle space, but one of the program's by-products, the HK XM8 , showed that there was a need for more modularity.

Thus, from the originally only was M4 imaginary SOPMOD emerged concept Picatinny rail to a NATO standard . This rail system allows the simple assembly of aiming aids and other accessories. They can now be found in all types of infantry weapons. Some weapon manufacturers took the desire for modularity even further, for example the FN SCAR and the Bushmaster ACR have an easily changeable barrel, which allows the use of several different calibers.