Recoil loaders are automatic firearms that draw the energy they need to eject the case and reload the new cartridge directly from the recoil energy of the shot. Alternative concepts are gas pressure chargers , in which the gas pressure taken from the barrel is used as a drive, or weapons with an external drive (e.g. chain gun ) that  require an external drive - usually an electric motor .

Recoil loaders use the energy of recoil to open the breech after a shot, to eject the empty cartridge case and to feed a new cartridge from the magazine into the chamber. The breech is only allowed to open when the projectile has left the barrel and the gas pressure has dropped to a non-critical value. The locking of the lock is " static with a positive fit".

In recoil loaders that use the recoil of the entire weapon, a movable piston is connected to the repeating mechanism. Such designs were experimented with at the end of the 19th century, but no practical weapons were developed. The later developed bump stick is based on a similar principle.

In some publications these weapons are referred to as back pressure loaders , but this is physically incorrect. This is because the bolt is not driven by gas pressure, but by moving the bullet in the barrel and the resulting recoil impulse. This property becomes clear when using blank cartridges (without bullet). With a gas pressure charger, this works when a maneuvering cartridge device narrows the cross-section of the barrel and this allows enough pressure to build up, which is necessary for reloading. In the case of a recoil loader, on the other hand, the pressure in the barrel can be as high as desired, the weapon does not repeat. In order to use recoil loaders with blank cartridges, a special maneuver cartridge device must be attached in front of the barrel, which acts as a recoil amplifier .

Recoil loader with a barrel sliding far back

In a recoil loader with a barrel that slides far back, there are usually two closing springs, one for the barrel and one for the breech block. The system was mainly used on older weapons such as the Chauchat machine gun , the Browning Auto 5 self-loading shotgun , or the Frommer Stop pistol .

Recoil loader with a briefly sliding back barrel 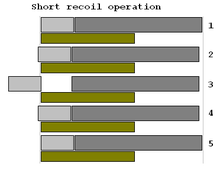 Recoil loaders with a short sliding barrel are significantly more numerous than those with a long sliding barrel. There are numerous types of closure. The Maxim machine gun invented by Hiram Maxim in 1885 and its successors, the heavy machine guns used in the First World War by Germany as the MG 08 and by England as the Vickers machine gun Mark 1, the Borchardt C93 pistol, the Luger pistol 08 and the Swiss Furrer machines Lmg 25  - had a knee joint lock . The German MG 34 had a rotating head lock , the lock head of which was unlocked by a quarter turn, while its successor, the MG 42 , had a roller lock . The Browning M1917 machine gun locks with a wedge, while the pistols designed according to the Browning system tilt the barrel to release the breech (e.g. FN Browning HP , Česká zbrojovka ČZ 75 ). Another variant is the support flap lock , which some pistols, such as the Walther P38 , the Mauser C96 or the Beretta 92 use.