With recoil, a distinction can be made between recoil impulse , recoil speed , recoil energy and recoil force.

The recoil from firearms is a factor in indoor ballistics .

The exact proportion of propellant gases in the total pulse is difficult to calculate and is generally determined experimentally. For practical (approximate) calculations, half the mass of the propellant charge is added to the projectile mass. 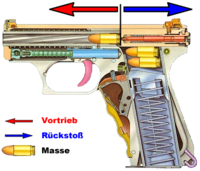 Recoil principle of a firearm

This means that a light projectile that leaves the barrel with the same muzzle energy as a heavier projectile emits less recoil energy than the heavy projectile, provided the weapon mass is the same. Especially with strong charges that are fired from relatively short barrels, the recoil effect of the gases flowing out of the barrel muzzle can contribute a significant proportion to the total energy of the recoil (rocket effect).

The bullet acceleration can ideally be calculated from the muzzle velocity of the bullet and the barrel length of the weapon :

The recoil of weapons can e.g. B. be lowered by muzzle brakes . In addition to muzzle brakes, the recoil of modern guns is usually also absorbed by a hydraulically braked barrel return . In order to be able to almost entirely avoid the undesirable effects of recoil, recoilless guns were also developed.

The energy of recoil is at recoil loaders used to open the shutter after a shot to eject the empty shell casing and to track a new cartridge into the cartridge chamber.

Recoil as a means of propulsion

In jet propulsion such as rocket engines and jet engines , the recoil force (commonly called thrust ) of a medium accelerated in a nozzle is used as the driving force. The recoil force is the product of the flow rate of the nozzle and the speed of the outflowing medium .

The conservation laws for momentum and energy apply to physical systems that have to be described using quantum mechanics , as well as in classical mechanics (see also kinematics ). Therefore, when emitting gamma radiation , for example, the emitted photon does not receive exactly the entire energy released by the transition, but the atomic nucleus retains a fraction of it as the kinetic energy of its recoil; see also Mössbauer effect .

The recoil protons generated by elastic collisions with fast neutrons in a hydrogen-containing material can be used for the detection and energy measurement of these neutrons (see neutron detector ).

Muscle and connective tissue are elastic. If they are stretched and then relaxed, a recoil effect occurs. When running forefoot , this can be used for energy-saving propulsion - but not when running the back of the foot . In order to optimally use the energy stored in the tissue for propulsion, the shortest possible contact time between the foot and the ground is necessary.