This article describes the city in Switzerland, for the river of the same name see Morges (river) .

Morges ([ mɔʀʒ ]), in the Franco-Provencal local dialect [ˈmɔrdzɛ] , [ˈmwardzɛ] , is a political municipality and capital of the Morges district in the Swiss canton of Vaud . The former German name Morsee is no longer used today. 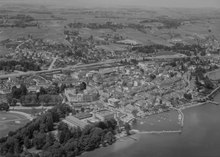 Morges is 374  m above sea level. M. , 10 km west of the canton capital Lausanne (air line). The city extends on the north bank of Lake Geneva , east of the mouth of the river Morges of the same name , in the Vaud Central Plateau .

The area of ​​the 3.9 km² municipal area includes a section on the north shore of Lake Geneva. The community soil extends northward from the lakeshore over the flat edge of the bank to the slopes of the adjacent hills. The central part is formed by the alluvial cone of the Morges, which is slightly pushed forward into Lake Geneva. To the west of its mouth, the area extends to the terrace of Tolochenaz. In the north, the slopes of the Echichens plateau belong to Morges, here at 468  m above sea level. M. reached the highest point of the urban area. The eastern boundary is the mouth of the Bief brook . In 1997, 72% of the municipal area was settled, 4% forest and woodland, 23% agriculture and a little less than 1% was unproductive land.

Morges includes extensive new residential and commercial areas as well as the hamlet of Marcelin ( 428  m above sea level ) on the southern slope of the Echichens plateau. The neighboring municipalities of Morges are Tolochenaz , Chigny , Vufflens-le-Château , Echichens , Lonay and Préverenges . Morges borders France over Lake Geneva .

The urban area is subdivided into the old town on the lakeshore, the newer quarters between the old town and the railway line and the outer residential areas north of the main rail and motorway traffic routes. The settlement area of ​​Morges has now seamlessly merged with those of Tolochenaz, Lonay and Préverenges.

The twin town of Morges is in France located Vertou .

The legislative authority is the municipality council ( conseil communal ) elected every four years by the voters of the municipality of Morges . The 100 MPs are elected by proportional representation. The tasks of the municipal council include budget and invoice approval, the establishment of municipal regulations and control of the executive. In the elections in 2016, the local Entente Morgienne party ran on a joint list with the green liberals . There was a list connection between the Greens and the SP / Independents . The distribution of seats was based on the graphic on the right.

The city of Morges today only has a small proportion of agricultural land (around 20%). The extensive vineyards on the southern slope of the Echichens plateau, which is optimally exposed to the sun, are important. Around 2% of the workforce in Morges earn their income in the primary economic sector.

Since the 17th century, with the construction of the Entreroches Canal , Morges has developed into an important trading and reloading point on the northern shore of Lake Geneva for goods such as salt, grain, wine and bricks. The shipyard of the Compagnie Générale de Navigation (CGN) was located on the port site from 1873 to 1889 , after which it was relocated to Ouchy ( Lausanne ).

The settlement of new industrial companies and the expansion of the commercial zones took place from the 1960s with the construction of the motorway. The most important branches of industry include the food industry, metal construction and mechanical engineering. Local companies are Friderici SA, which specializes in international transport, Friederich SA (mechanical engineering) and the Neeser foundry.

Numerous other jobs are available in the service sector, including in the district and city administration, in the district hospital and in the tourism sector. The Center informatique et électronique de Morges (CIEM) has been in the city since 1990.

Morges is an important regional cultural and educational center. The city has two theaters, the Théâtre de Beausobre (since 1959) and the Théâtre des Trois Petits Tours (since 1986). There are also several museums, including the Alexis Forel Museum, the Vaudois Military Museum (Musée militaire vaudois, together with the cantonal armory in the castle), the Musée Galère la liberté and the Musée Paderewski. The tulip festival is celebrated in spring.

The cantonal agricultural school Marcelin is located on the northern outskirts, next to which the new grammar school was built from 2000 to 2003. Morges also has an ice rink, an indoor swimming pool, a boat harbor and a campsite.

The community is very well developed in terms of transport. It is located on the main road 1 from Geneva along the lake to Lausanne . The branches of the main roads to Cossonay and Bière are near Morges . With the construction of the A1 motorway (Geneva – Lausanne), which opened in 1964  , the municipality was divided in two. The full Morges-Ouest connection and the Morges-Est half connection of the A1 motorway are located in the urban area.

The first railway line reached Morges on July 1, 1855 with the opening of the Renens - Morges line. Around three years later, on April 14, 1858, the western continuation, the section from Morges to Coppet, was inaugurated. After the entire route from Lausanne to Geneva was opened in 1858, merchant shipping on Lake Geneva, which had been important until then, came to a standstill. The SBB station is also the starting point for the Bière – Apples – Morges narrow-gauge railway that went into operation on July 1, 1895 .

Numerous Postbus lines, which start at Morges train station, provide for the fine distribution of public transport. There are bus connections with Ecublens , Apples , Lavigny , Cossonay and (at certain times) with Le Pont in the Vallée de Joux . Morges is also an important station for passenger shipping on Lake Geneva.

The story of Morges begins relatively late - compared to other cities in western Switzerland. In the 13th century the place only consisted of a few houses on the lake shore. Construction of the palace began in 1286 under Ludwig I of Savoy . The establishment of the market town by the Savoy was directed against the expansion of power of the bishops of Lausanne. In addition, the Savoy wanted to control the trade route between Lausanne and Geneva and to establish a new station for merchant shipping on Lake Geneva. The first documentary mention was made in 1297 tempore quo Morgia constructa est (at the time when Morges was founded). According to an older view, which goes back to Johann Ulrich Hubschmied , the place name is derived from a hypothetical Celtic * morga «border»; the interpretation adopted today by Theodora Geiger, Bruno Boesch and Wulf Müller leads the name to Indo-European * mer (e) g- u. Ä. «Swamp, swampy river» back. The name of the place is thus derived from the name of the body of water.

The market town to the northeast of the castle has had town charter since it was founded. Morges was temporarily the residence of the Counts and Dukes of Savoy from 1359 to 1536. With the conquest of Vaud by Bern in 1536, Morges became the capital and the castle became the official seat of the bailiwick of the same name. During the Bernese period, the Bailiwick of Morges included the area of ​​today's Morges district as well as the areas of the Cossonay and Rolle districts and parts of the Aubonne district. Morges experienced an economic boom in the 17th and 18th centuries as an important trading center and location of the Bernese Lake Geneva fleet. In 1672 a seafaring school was founded, and from 1691 to 1696, under the supervision of Bern, a 16,000 m² port for the navy was laid out.

After the collapse of the Ancien Régime , the city belonged to the canton of Léman from 1798 to 1803 during the Helvetic Republic, which then became part of the canton of Vaud when the mediation constitution came into force . In 1798 the city became the capital of the Morges district. Another upswing followed in the course of the 19th century with the connection to the Swiss railway network.

The historic town of Morges with two long streets (Grand-Rue and Rue Louis-de-Savoie) parallel to the lake and several small cross streets has a picturesque medieval townscape. The north-eastern end of the old town is the church, which was built at the end of the 18th century on the site of a former church. The Reformed Church combines baroque and classicist styles and is one of the most important Protestant buildings in Switzerland at that time. The cross-shaped nave dates from the years 1769–1771, while the facade was built under the architect Rodolphe de Crousaz 1772–1776. This architect also designed the wooden choir stalls in the apse.

To the southwest of the old town stands the mighty castle, which was built in 1286–1291 in the shape of a Carré savoyard. The regular square building with three smaller round corner towers and the large round north tower as a donjon got its present form in the 16th and 17th centuries. The castle has been owned by the canton of Vaud since the revolution and initially served as an armory. The castle has housed the Vaudois Military Museum since 1932. In the old town is the late Gothic Hôtel de Ville (town hall), which was built between 1518 and 1520. It has a hexagonal stair tower, a baroque portal and a magnificent council chamber from the 17th and 18th centuries. Next to it is a renaissance building that was built in 1620 as an extension of the town hall and today serves as a police building.

Numerous other town and patrician houses in the old town date from the 15th to 18th centuries. These include the Blanchenay house, which was redesigned in Baroque style in 1670 and today houses the Musée Alexis Forel, the early Classicist Monod house (1768), the Confiserie Vernet with late Gothic windows and the Hôtel de la Couronne (around 1800).

In the late 19th century, the Morges quay was redesigned. The wide promenade and the Parc de l'Indépendance, laid out in 1898, invite you to stroll.