Vufflens-le-Château is a municipality in the Morges district of the canton of Vaud in Switzerland .

Vufflens-le-Château lies at 473  m above sea level. M. , 2.5 km northwest of the district capital Morges (air line). The village extends on the edge of a plateau to the west of the Morges valley , in the Vaud Central Plateau , in a panoramic location around 100 m above lake level of Lake Geneva .

The area of ​​the 2.1 km² municipal area covers a section of the Vaud Central Plateau in the hinterland of Morges. Most of the municipality's ground is taken up by the Vufflens plateau; the highest point is 515  m above sea level. M. at La Pale . The northern boundary is the Curbit brook , which flows into the Morges. In the northeast and east the border runs along the winding course of the Morges, which flows in a wooded valley around 50 to 70 m deep. To the south, the area extends to the terrace of Chigny in front of the Vufflens plateau. In 1997, 16% of the municipal area was in settlements, 13% in forests and woodlands, 70% in agriculture and a little less than 1% was unproductive land.

With 885 inhabitants (as of December 31, 2018), Vufflens-le-Château is one of the smaller municipalities in the canton of Vaud. 84.8% of the residents are French-speaking, 6.7% German-speaking and 4.0% English-speaking (as of 2000). Probably the most famous resident of Vufflens-le-Château was Michael Schumacher from 1996 to 2008 .

Until the second half of the 20th century, Vufflens-le-Château was predominantly an agricultural village. Even today, agriculture and viticulture have a certain importance in the income structure of the population. A large wine-growing area extends on the slopes below the village. Further jobs are available in local small businesses and in the information technology services sector . In the last few decades the village has developed into a residential community thanks to its attractive location. Many workers are commuters who work mainly in Morges and Lausanne.

Although the community is located away from major thoroughfares, it is still well developed in terms of traffic. It is located on the cantonal road from Morges to Bussy. The Morges-Ouest motorway junction on the A1 (Geneva-Lausanne) opened in 1964 is around 3 km from the town. On July 1, 1895, the narrow-gauge railway Bière-Apples-Morges with a station in Vufflens-le-Château was put into operation. 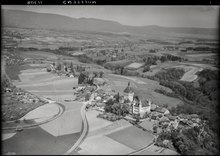 In the Middle Ages the place was the seat of the Lords of Vufflens and came to the Lords of Cossonay as a fief in 1235 . With the conquest of Vaud by Bern in 1536, Vufflens-le-Château came under the administration of the Bailiwick of Morges . After the collapse of the Ancien Régime , the village belonged to the canton of Léman from 1798 to 1803 during the Helvetic Republic, which then became part of the canton of Vaud when the mediation constitution came into force . In 1798 it was assigned to the Morges district.

The village is dominated by the imposing Vufflens Castle . The brick building, inspired by Piedmontese castles, was built between 1420 and 1430 on the foundation walls of a medieval castle by the aristocratic Colombier family and is one of the most important castles in western Switzerland. The most striking building is the 60 m high square donjon . This is surrounded by four lower towers, which are connected to each other by a battlement with machicolations . The keep is separated from the adjoining residential building to the east by an inner courtyard. This is also flanked by four round corner towers and provided with a wreath of machicolation. The castle, which was restored in 1860, is now privately owned and cannot be visited by the public.