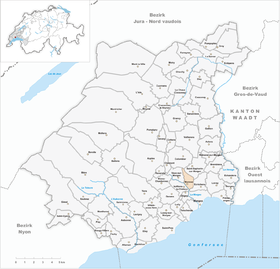 Monnaz is a place and a former municipality in the Morges district of the canton of Vaud in Switzerland . On July 1, 2011 Monnaz merged with Colombier and Saint-Saphorin-sur-Morges to form the municipality of Echichens .

Monnaz lies at 485  m above sea level. M. , two and a half kilometers northwest of the district capital Morges (beeline). The village extends on the southwestern edge of a plateau above the valley of the Morges , opposite Vufflens-le-Château, in the Waadtländer Mittelland , in a panoramic position around 100 m above the lake level of Lake Geneva .

The area of ​​the municipality of 2.3 km² covers a section of the Vaud Central Plateau north of Lake Geneva. The area is bordered in the south-west by the approximately 60 m deep valley of the Morges, the south-east border forms its left side stream Baillon . To the north, the municipality extends over the gently undulating plateau of the Central Plateau and reaches at La Solitude at 530  m above sea level. M. the highest point of Monnaz. In 1997, 8% of the municipal area was accounted for by settlements, 16% for forests and woodlands and 76% for agriculture.

Until the second half of the 20th century, Monnaz was predominantly an agricultural village. Even today, agriculture has an important role in the income structure of the population. On the slope above the Morges there are some small wine-growing areas (8 hectares in total). Only a few jobs are available in local small businesses and in the service sector. In the last few decades the village has developed into a residential community thanks to its attractive location. Many workers are therefore commuters who work mainly in Morges and Lausanne.

The municipality is well developed in terms of transport, although it is located off the main thoroughfares on a cantonal road from Morges to Clarmont . The Morges-Ouest motorway junction on the A1 (Geneva-Lausanne) opened in 1964 is around 3 km from the town. Monnaz is connected to the public transport network through a Postbus course that runs from Morges to Apples .

The first documentary mention of the place took place in 1213 under the names Mona and Monna . In 1221 the name Muna appeared and in 1453 the current place name. It probably goes back to the Latin personal name Monnus . Since the Middle Ages, the small lordship of Monnaz has been under the lords of Montricher . With the conquest of Vaud by Bern in 1536, Monnaz came under the administration of the Bailiwick of Morges . After the collapse of the Ancien Régime , the village belonged to the canton of Léman from 1798 to 1803 during the Helvetic Republic, which then became part of the canton of Vaud when the mediation constitution came into force . In 1798 it was assigned to the Morges district.