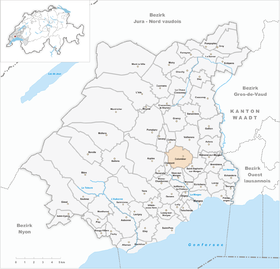 Colombier (VD) ([ kɔlɔ̃bje ], in the native Franco-Provencal dialect [ (a) kɔlɔ̃ˈbiː ]) was a municipality in the Morges district of the canton of Vaud in Switzerland until June 30, 2011 . On July 1, 2011, Colombier merged with Monnaz and Saint-Saphorin-sur-Morges to form the municipality of Echichens .

Colombier lies at 517  m above sea level. M. , 5.5 km north-northwest of the district capital Morges (linear distance). The farming village extends on a slope sloping to the south-east over the valley basin of the Senoge , in the south-west of the Gros de Vaud , in the Swiss Central Plateau .

The area of ​​the 5.3 km² municipal area comprises a section of the gently undulating plateau of the Gros de Vaud, the granary of the Vaud Central Plateau. The area of ​​Colombier is occupied by the basin of the upper Senoge, which flows in an arc around the hill on which the village is located. In the north, the municipality extends to the En Ombre hill ( 570  m above sea level ) and in the south-east to the height of Saint-Saphorin-sur-Morges (up to 525  m above sea level ). The western boundary is mostly formed by the Morges stream . Below the En Lèvremont settlement belonging to Apples is 580  m above sea level. M. reached the highest point of Colombier. In 1997, 5% of the municipal area was in settlements, 10% in forests and woodlands, 84% in agriculture and a little less than 1% was unproductive land.

The Forel estate ( 542  m above sea level ) on the upper Morges and several individual farms belong to Colombier . Before the merger, the neighboring municipalities of Colombier were Vullierens , Saint-Saphorin-sur-Morges , Monnaz , Vaux-sur-Morges , Clarmont , Apples , Sévery and Cottens .

Colombier was a predominantly agricultural village until the middle of the 20th century . Even today, agriculture has an important role in the income structure of the population. There are some small wine-growing areas in the area of ​​the village . Further jobs are available in local small businesses and in the service sector. In the last few decades the village has developed into a residential community. Many workers are therefore commuters who work mainly in Morges and Lausanne.

Although the community is located off the main thoroughfares, it is still very well developed in terms of traffic. It is located on the cantonal road from Morges to Cottens . The Postbus course, which runs from Morges to Cossonay , connects Colombier to the public transport network.

The first documentary mention of the place took place in 937 under the name Columbaris . Later the names Colonberio (987), Columberium (1005), Columbie (1228) appeared; in the 19th century the spelling Collombier was also used. The place name goes back to the Latin word columbarium ( dovecote ).

In the Middle Ages , Colombier belonged to the Lords of Vullierens, who were under the barony of Cossonay. From the 13th to the 16th century, Colombier formed its own rule. With the conquest of Vaud by Bern in 1536, the village came under the administration of the Bailiwick of Morges . After the collapse of the Ancien Régime , Colombier belonged to the canton of Léman from 1798 to 1803 during the Helvetic Republic, which then became part of the canton of Vaud when the mediation constitution came into force . In 1798 it was assigned to the Morges district and in 1803 received the status of a district capital.

The parish church of Saint-Martin, mentioned in 1228, dates from the 15th century in its current form. The choir arch and the southern side chapel Saint-Jean-Baptiste are in late Gothic style (around 1500). No remains of the former castle of the nobles of Colombier are visible. A new castle was built around 1500, which was changed several times in the 17th and 18th centuries. From the original building a heptagonal stair tower, the portal and a fresco of the antipope Felix V have been preserved. The town hall of Colombier dates from 1801, the school house from 1841 and the Collège d'en haut was built in 1877. In the old town center there are some characteristic farmhouses from the 18th and 19th centuries.