The title of this article is ambiguous. Further meanings are listed under thrust (disambiguation) .

Thrust is a force that is quantitatively described by Newton's second and third laws . When a system ejects or accelerates mass in one direction, the accelerated mass exerts a force of the same magnitude but in the opposite direction on the system. In the case of missiles, the thrust overcomes air resistance and gravity , generates propulsion and causes acceleration . In particular, thrust is used as a parameter for the performance of jet engines and rocket engines .

The unit of thrust, like that of force in general, is the newton (N). Sometimes the outdated unit kilopond (kp) is still used. In English-speaking countries in particular, the unit lbs or lbf is often found as an abbreviation for pounds or pounds force ( German pound or pound force effect).

In jet propulsion systems, thrust is the preferred parameter, since with pure jet engines no direct power measurement on a drive shaft is possible. In the case of piston engine engines and propeller turbines , on the other hand, the power rating in kilowatts is common. However, the relevant driving force that comes from a propeller driven by a piston engine or turbine is the generated thrust.

A PW4062 engine of a Boeing 747-400 generates a maximum thrust of approx. 62,100 lbf or 276 kN during take-off. To achieve this thrust, three liters of kerosene are burned per second. Proof that an engine actually generates this thrust is demonstrated and certified on a test stand after production or repair .

A VTOL can only take off vertically if the thrust is greater than the weight of the aircraft, see also thrust-to-weight ratio . For a 17 ton Hawker Siddeley Harrier z. B. the 200 kN from his engine are enough to accelerate it vertically. With fixed-wing aircraft, the thrust only has to be a fraction of its own weight, since the wing "bears" the other part of its own weight. This fraction is characterized by the glide ratio .

Thrust on the jet engine

The thrust arises from the fact that the air mass that has passed through is accelerated. For this, kinetic energy must be supplied to the air. If the pressure loss caused by the thrust nozzle can be neglected, the nozzle is said to be adjusted.

According to the law of conservation of momentum, the following applies to the net thrust of an engine :

: Mass flow of the expelled air

: Mass flow of the sucked air

: Speed ​​of the sucked air

Since the combustion of the fuel and the associated increase in temperature causes the gas to expand and the increased volume to exit through the narrowed cross-section of the nozzle, the speed c of the air flow increases (for more details see: jet engine ). In fan guns, the airflow is accelerated by a powered propeller.

Since the engine nacelle creates an air resistance D (the air resistance of the aircraft can be neglected), this must be subtracted from the net thrust. This means that two aircraft can have different thrust even though they are equipped with the same engines (e.g. A350 and Boeing 787 ). So it applies

Since air becomes thinner the higher you fly, the mass flow also decreases with increasing altitude. So you define an engine thrust under ISA conditions and then say

where the air density (ρ - rho) can be estimated, for example, using the barometric altitude formula .

Thrust on the rocket engine 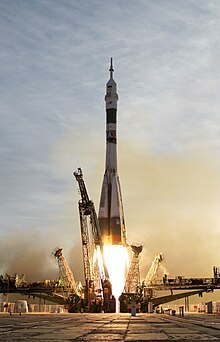 Launch of a Soyuz rocket

When propelling a rocket , speed is particularly important when the fuel is exhausted.

For the thrust pulse is valid (after the pulse rate ):

If the propulsion (not always given, see e.g. the course of the thrust force in solid rockets ), it follows for the final speed with and taking into account the empty rocket mass and the fuel mass :

The final speed increases with the ejection speed (typical value is 4500 m / s) and the ratio of initial to final mass (typically 30: 1 to 100: 1). Corrections for the air resistance are to be taken into account analogously to the case of the jet engine.

An important application for rocket propulsion is overcoming the acceleration of gravity . To do this, the rocket must reach the escape speed (e for escape ).

In the case of a launch vehicle, for example, the final mass is almost identical to the payload, only this reaches the target height (with the payload fairing ):

Thrust is a force. The net power is obtained by multiplying it by the speed of movement:

A running jet engine on a stationary aircraft (e.g. while waiting for take-off clearance) does not move, its useful power and thus its efficiency is zero. Nevertheless, a performance is always required for any thrust. This results from the energies supplied to the air masses per unit of time, if static initial air masses are assumed.

Since the speed only has a linear effect on the thrust, more thrust can be generated with a larger engine cross-section and thus larger air masses with less power. This also explains the trend towards engines with ever larger bypass ratios and larger rotors.

The power P is the product of the force F and the speed of movement v ; it is thus defined as the multiplication of force with speed:

The factor v , i.e. the speed of movement of an aggregate that performs, is by no means constant. Only if a speed v greater than 0 is given, thrust, i.e. force, multiplied by the speed, can result in a power (greater than 0).

The Eurofighter Typhoon brings about 180 kN of thrust with full use of the afterburners of both engines. Full thrust is required to reach the top speed of around Mach 2 (around 2,300 km / h ≈ 639 m / s). Then the engines deliver a power of about