The magazine is a container for multiple cartridges that is built into or interchangeably attached to firearms . In the case of repeating rifles, these are inserted into the cartridge chamber through the manual reloading movement of the slide , and in the case of semi-automatic and fully automatic weapons, through a corresponding mechanism .

Magazine box of the Mauser Mod. 98

The box magazine is mainly used in military and hunting repeating rifles . In contrast to the magazine box integrated in such weapons , it can be removed. The cartridges are usually stored in two rows, the capacity usually varies between four and ten cartridges. Box magazines with low capacity for conical cartridges are often designed as trapezoidal magazines . The magazine is straight at the front and back (like the bar magazine), but the bottom is lower at the back than the front and the side walls are adapted to the shape of the cartridge. These magazines are mostly used when no more than ten cartridges are loaded.

Pistol magazine of the Glock 17 with readable ammunition level 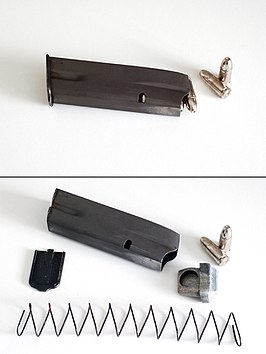 Double row magazine for a pistol

The bar magazine is the most common form of magazine for self-loaders. It is mainly used in pistols with capacities between 5 and 40 cartridges. The cartridges are arranged in one or two or four rows and are pressed by a spring into the loading space or towards the closure .

Rod magazines are divided into single or double row magazines, for reasons of capacity two-row magazines are predominantly used nowadays for utility weapons, but there have also been three- or four-row magazines such as the Mp-43-Suomi submachine gun introduced in Switzerland (see also bullet packs ) .

The curve magazine is a special form of the rod magazine and is nowadays used almost exclusively for assault rifles and submachine guns. These weapons mainly use cartridges with conical casings (e.g. 5.56 × 45 mm NATO ) or - as with Bren  - cartridges with a rim ( .303 British ). In order to be able to exert even spring pressure on the cartridges, the magazine is curved - the degree of curvature depends on the type of cartridge used. Curve magazines often have beads or stiffening ribs to make them more stable. Curve magazines made of transparent, fiber-reinforced plastic have the advantage that their fill level can be read off better; In addition, they are lighter, more corrosion-resistant and cheaper.

The magazine of the Chauchat -MG is U-shaped, as the French 8 mm Lebel cartridge has a strongly conical shape and a wide rim. 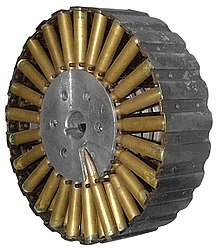 Special form of the plate magazine on a Lewis machine gun

The plate magazine was used on some machine guns during the world wars , for example the English Lewis and the Soviet IMG DP . An example of a submachine gun with a plate magazine is the Voere AM 180 Automat with a capacity of 176 cartridges in .22 caliber .

The plate magazine is located flat over the breech of the weapon. The cartridges are pushed in a circle, the tip is pushed in and down into the breech.

A drum magazine works in a similar way to a rod magazine - the container and the corresponding spring are, however, arranged in a spiral, this type of magazine is nowadays mainly found in assault rifles in order to be able to use them as IMGs. In the case of the Thompson 1928A1 submachine guns used in World War II , either bar magazines with 20 or 30 rounds or drum magazines with 50 rounds could be used. Curve magazines with 35 rounds or drums with 71 rounds could also be used on the Russian PPSch-41 . The German machine guns MG 13 and MG 15 and rarely the MG 34 also used double drums. A drum magazine with 32 cartridges was also available for the special model Lange Pistole 08 ("Ari-08").

The orderly weapon of the Bundeswehr , the HK G36 , can also be equipped with a Beta-C double drum magazine.

Drum magazines were also used in civilian weapons such as the Ruger 10/22 rifle from Sturm, Ruger & Co. , the Mannlicher-Schönauer rifle, and the lever-operated repeater manufactured by Savage in the USA from 1895.

The belt drum has a visual similarity to the drum magazine, but it contains a rolled-up ammunition belt as a belt box . The most famous examples are the MG 08/15 , the MG 34, the MG 42 and the Soviet RPD .

The drum magazine must not be confused with the drum of a revolver . It is true that the drum in a revolver also serves as a magazine, but at the same time it forms the chamber , i.e. the place where the cartridge is ignited.

In comparison to rod magazines, drum magazines are considered to be less reliable.

Open tubular magazine of a Henry rifle , open at the front for loading, feeder

A tube magazine is a tube attached under the barrel or housed in the piston that contains the cartridges. The cartridge is brought into position by spring pressure and pushed into the chamber by pushing the bolt forward. As a rule, tube magazines located under the barrel are loaded from behind through a loading opening. If the magazine is in the butt, as is the case with the FN-Browning self-loading rifle cal 22 , a tube with the supply spring must be removed for loading and then pushed back in again. An exchange of the entire magazine is not planned, tube magazines are firmly attached to the weapon.

These problems do not exist with shotguns, as shotgun shells are usually flat or round at the front. Due to their design, shotgun barrel projectiles (FLG) have tips, the FLG cartridges are open at the front so that they can be distinguished from shotgun shells by means of buttons. If the bullet tip protrudes from the cartridge, there is a risk of ignition in the magazine, which is why there are special cartridges for shotguns with a tubular magazine.

A disadvantage of guns with a tubular magazine is the shift in the center of gravity when the gun is empty. However, this does not apply to small-bore rifles, which is why many such weapons are still manufactured in the USA in particular. This is also not a problem with short forend shotguns, after all they are not considered precision weapons.

The helix or worm magazine is a mixture of tube and drum magazine and enables a high capacity with a compact design of the entire weapon. An Archimedean screw in the magazine tube is used to feed the cartridges , which rotates to bring the next cartridge into position during reloading. Screw magazines are mainly used for submachine guns such as the Russian PP-19 Bison or the Calico M950 . In addition, the Vörös pistol, which is often mentioned in the press, was built in a few pieces.

The principle of the worm magazine was registered for a patent by the American inventor Warren Evans as early as 1868 and used in the Evans rifle . The magazine is located in the rifle butt and holds between 28 and 34 cartridges, depending on the type of ammunition.

The disadvantage is the higher complexity of the magazine. It is also more difficult to load and more likely to jam .

Magazines are not part of the weapon law as they are not listed under the “essential parts” of a firearm in the Weapons Act; insofar they can be acquired freely. However, restrictions apply to hunters and marksmen. It is forbidden to “shoot game with semi-automatic long guns loaded with a total of more than three cartridges, as well as with automatic weapons” (Section 19 of the Federal Hunting Act). The Federal Administrative Court interprets this provision as meaning that "the prohibition is not linked to the behavior of the hunter, but to the structural condition of the firearm." The technically possible ammunition capacity of the weapon is therefore relevant, but not the actual state of charge. The background to the decision was the - ultimately unsuccessful - complaint by a hunter against an official requirement to limit the magazine capacity of a hunting rifle. Due to such requirements, there may well be a weapon law relevance for magazines beyond the wording of the law.