The machine gun 08 was named after it was launched in 1908. It was water-cooled and mounted on a height-adjustable carriage . At the beginning of the First World War, Germany owned 4,919 MG 08. The weapon was too heavy to follow its own infantry on foot. Structurally, most of the machine guns were part of the specially formed machine gun companies of the infantry units. Further developments appeared necessary.

Engraving on a 08/15 gun from the Gewehrfabrik (Gwf.) Spandau

From 1915 , the 08/15 variant was developed based on the MG 08. From the summer of 1917, the weapon designated as the light MG 08/15 was issued to the troops. The modifications were intended to avoid the time-consuming and slow tracking of machine-gun troops during assault attacks. The new variant should be able to be used in the front rows during the attack. In addition, the machine gun had to be able to follow the infantry dismounted. Too many infantry attacks failed due to a lack of machine gun support, or too many machine guns were lost because they could not be dismantled in time. Therefore, the machine gun was now designed as a light machine gun with a bipod and shoulder rest. Each (rifle) company initially received two, later four. In early 1918 the number was even increased to six. To transport the MG 08/15 and the associated ammunition, the (rifle) companies were each assigned two field wagons.

Despite the designation light MG 08/15, the 08/15 was comparatively heavy when unloaded. The MG itself, without water, weighed 15 kg. The water filling was 2.8 liters. Added to this were 1.94 kg for the steam hose, belt and cover. Without the firing frame, the MG weighed 19.74 kg, with a fork support 20.84 kg and with a steel aerial target tripod 28.74 kg. A full cartridge box weighed 9.5 kg. The British and French light machine guns, e.g. B. the Lewis machine gun and the Hotchkiss M1909 , each weighing approx. 13 kg unloaded, weighed significantly less. The 08/15 was therefore only partially suitable for assault attacks. Assault and shock troops were therefore given priority with captured machine guns.

A handcart was first used to transport the MG08 / 15, but later, after the carriage had not proven itself, a sledge (a wooden tub with iron runners on which the MG was strapped). With the sled, the loaded machine gun, including ammunition and water boxes, could be moved quickly over any terrain by a single soldier. The war events, which at that time already for the trench and trench warfare had changed, meant that the 08/15 mainly defensive duties took over. Here it had the advantage of a higher loading capacity due to the 250-shot belt case and the longer firing capability due to the water cooling (the 2.8 liters were sufficient for a maximum of 2,000 shots). For the time being, elite regiments received the modified weapon. In the further course of the war, however, larger units were equipped with this type. The 08/15 became the most widespread German machine gun of the First World War with almost 130,000 units produced.

According to the Versailles Treaty , only 1,926 (+ 4% reserve) machine guns of all types were approved for the Reichswehr . However, in 1927 there was a secret inventory of around 12,000 machine guns.

The light machine guns 08/15 and 08/18 were used in the rifle companies (1st – 3rd company of each battalion). Here, two light machine guns were assigned to each of the three riflemen's platoons, so that each platoon had two machine gun groups (each consisting of 1 non-commissioned officer, 4 machine-gunner, 1 telescopic sight and 2 riflemen) and two to three rifle groups (each with 1 non-commissioned officer and 7 riflemen) . A rifle company had a total of six light machine guns. These were carried on the combat vehicle, pulled onto handcart or carried by the waitresses. Two (empty) handcarts were attached to the rear of one of the three combat vehicles during marches. Instead of six handcarts, hunting companies had a total of six pack animals, each with a pack handler.

The cavalry were in accordance with the Treaty of Versailles no light machine guns allowed. One made do with " MG 08/15 and MG 08/18 borrowed from the infantry" . Each rider platoon carried a machine gun on a pack animal.

The cavalry only received its own light machine guns in 1931 with the new MG 13 .

After the Reichswehr was renamed the Wehrmacht , the MG 08 and MG 08/15 were replaced by the MG 34 from 1936, starting with the active infantry divisions . The MG 08/15 , MG 08/18 and MG 08 as well as their machine gun vehicles and handcarts were handed over to the reserve or Landwehr infantry divisions to be filled with reservists in the event of mobilization . Occasionally it was used on the Eastern Front until 1941.

Towards the end of the First World War, the MG 08/15 was further developed into the air-cooled MG 08/18. This model was light enough for assault attacks, but because of its late introduction it was mainly only used to secure the German retreat.

The lMG 08 with interrupter gear for synchronization with the propeller on fighter aircraft . The one-handed operation for finished loading can be seen.

The air-cooled lMG 08 and lMG 08/15 were specially developed for fighter aircraft . 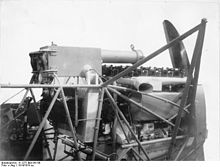 The Ernemann company in Dresden, along with other manufacturers, manufactured a type of film camera based on the design of the film pioneer Oskar Messter , which was able to take 600 pictures per minute. The outer shape was based on the MG 08/15. All handles and controls and the weight were identical, as was the sighting device. Except that instead of shots, individual shots were taken when the trigger was pulled. The film strips were in the ammunition pouches. The device was used in pilot training and was used for target exercises on enemy aircraft. The film strip was shown in a projection room with an aircraft approaching, the pilot pulled the trigger and the accuracy of the target could be determined on the basis of the recordings.

The main innovations compared to the MG 08 were:

To simplify the filling of the ammunition belts, the belt filler 16 was used, which could be "best" screwed onto a table or in a battle on the rear wheel of the machine gun vehicle.

The individual parts of the MG 08/15 were manufactured by several companies. The associated standardization of the manufacturing processes was one of the reasons for the establishment of the Royal Manufacturing Office, a forerunner of the standards committee of German industry. However, no tapered pins standardized according to DIN 1 were installed in MG 08/15 .

Machine guns of the series 08 are in the German Historical Museum Berlin , in the Arms Museum in Suhl , in the Military History Museum in Dresden and in numerous fortresses and museums in France that are open to inspection - such as For example, the Mémorial de Verdun , the Citadelle de Verdun , the Musée de l'artillerie in Draguignan , the Musée de l'air et de l'espace at Le Bourget Airport near Paris , the Munster Tank Museum and the Reuenthal Fortress Museum .