The title of this article is ambiguous. For the cartridge chamber on bicycles, see bottom bracket #Patronenlager .

In modern handguns and handguns, the cartridge case is used as a seal, as this inflates for a few milliseconds at the moment the propellant charge is ignited due to the increase in pressure, presses against the cartridge chamber and thus creates a gas-tight connection ( Liderung ). After the pressure drop, the sleeve contracts again and should be able to be pulled out without any effort.

The chamber must not be too wide, otherwise the case may tear and the case may jam. If the chamber is too narrow or too short, the weapon cannot be loaded. Avoiding this requires that the structure of the cartridge chamber match the shape of the cartridge case within close tolerances . When manufacturing the cartridge chamber, attention must therefore be paid to maximum dimensional accuracy. After the cylindrical bore that was made first has been cleared at the end of the barrel, it must be matched to the type of cartridge that will be used later with a reamer .

After the first long guns loaded with cartridges, the cartridge chambers and the cartridge cases were mostly cylindrical. The cartridge cases had an edge that rested on the rear end of the barrel or, with the Lefaucheux ignition, which was also used at the time, a protruding pin that held the case in place. The sleeves were cylindrical or slightly conical in shape. The chamber was usually a little longer than the case and ended with or without a transition cone in front of the trains. The cartridge chamber of the Springfield 1873 rifle , which was used by the US Army until 1893, is 54.6 mm long, while the case of the .45-70 cartridge only protrudes 51.5 mm. Today rim cartridges are still used in small caliber weapons with rim ignition, hunting weapons and revolvers.

With early breech loading weapons, muzzle loaders and revolvers converted to rear loading, the cartridge chamber usually had no transition cone in front of the trains. In order to improve the gas-tight contact between the trains and the projectile, minié projectiles with a hollow bottom were mostly used in these weapons . This caused the projectiles to expand due to the gas pressure to the pull dimension of the barrel , which led to an improvement in the firing performance of the weapon.

In order to increase the amount of powder with the same cartridge length, cartridge cases were made in the shape of a bottle from 1870 onwards. These front tapered cartridges are known as bottle neck cartridges. This later also made it possible to use rimless cases, as the cartridge is supported with its shoulder against the conical part of the chamber when the breech is locked (see Figure 1.2). This fixes the cartridge parallel to the barrel axis and also centers it.

The cartridge chamber for bottle neck cartridges must be of the correct length. If the distance between the tapering cone is too short, the closure cannot be closed; if it is too long, the sleeve can inflate or tear.

Today, with a few exceptions, bottle neck cartridges are only used in long guns. Commercially available cartridges for this type of chamber usually generate gas pressures in the region of 4,000 bar, with some large game hunting cartridges or military cartridges such as the .50 BMG the gas pressure can be up to 5,000 bar.

Another type of sleeve support is that of the sleeve mouth rest. In this case, the chamber is bored slightly excessively cylindrical with respect to the barrel. The resulting shoulder (see Fig. 2.2) forms the supporting abutment for the edge of the inserted cartridge. Here, too, the case metal inflates slightly in the shot and seals the barrel towards the breech, even if the breech and the case already run back a little when the gun is unlocked. This design of the cartridge chamber is usually used for cartridges with cylindrical cases without a rim

Cartridge chambers, known as belts, are used to hold cartridges whose case has an annular extension immediately in front of the pull-out groove. The corresponding cartridge chambers are drilled larger to match this extension. Like the rim of rim cartridges, the belt is used to position the cartridge, ie to prevent it from penetrating too deeply into the chamber. Because of its smaller radial extent than a case edge, it has the advantage of disrupting the loading process of weapons with a box magazine less.

The principle was first applied by the British hunting weapon manufacturer Holland & Holland for rimless hunting cartridges such as the .375 Holland & Holland Magnum . In the case of belt cartridges, the requirements for the manufacturing tolerances for ammunition and cartridge chamber are lower than for bottle sleeves that fit shoulder-to-shoulder.

In the military field, belt- mounted cartridge chambers and corresponding cartridges were used in the British armed forces in the Armored Rifle Boys and by the Axis powers in the heavy armored rifle Solothurn S 18-100 and S 18-1000 in 20 mm caliber. 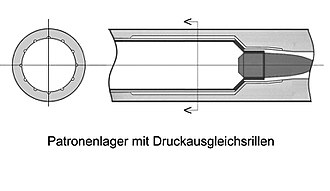 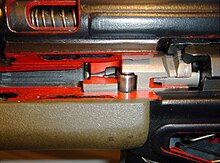 G3 with pressure compensation grooves in the chamber

In modern recoil chargers with delayed mass locking, the return of the bolt head and case base begins immediately after the ignition due to the increase in pressure. The gas pressure presses the tapered front part of the case against the inner cone of the chamber and at the same time the cylindrical part of the case expands and is pressed against the inner wall of the chamber, resulting in the case being blocked. In order to avoid tearing off the cartridge base, which is not supported by the breech, and tearing the case in other places, the pressure difference between the inside and the outside of the case must be equalized as far as possible. For this purpose, pressure compensation grooves ( fluting ) are milled between the barrel and the cartridge chamber, which effect pressure compensation. The case is "floating" at the front, but still seals the cartridge chamber sufficiently in the rear third, the function of the weapon is guaranteed. The fluting also ensures a functional reserve for the automatic reloading process. However, the cleanliness of the barrel and the sleeve material are also decisive, sleeve material that is too soft can deform and possibly press into the fluting.