This article covers the Jeep car brand from Fiat Chrysler Automobiles NV. Further meanings are given under Jeep (disambiguation) .

Jeep is a US car brand that belongs to the Fiat Chrysler Automobiles concern. Its direct parent company is the Chrysler Group LLC. Only off-road vehicles are produced . In the course of time, the name Jeep - similar to Tesa and Tempo  - has developed into a generic name in Europe (with the difference, however, that the term Jeep was not established as a trademark, but was previously used for the US military off-road vehicle Willys MB ) . This is why other off-road vehicles are sometimes referred to colloquially in Europe as "Jeep", while in the USA the term SUV (sport utility vehicle) has become established.

The origin of the word jeep is not clear. The best-known theory is the derivation from the abbreviation GP for General Purpose ('all purpose'). However, Lee Ermey recently disproved this theory in his documentary series. The vehicle was developed for special purposes and was therefore never referred to as a general purpose . Instead, it can be derived from a factory code used by Ford, which is also GP (G for government-use, and P as designation for 80 inch wheelbase). Deviating from this, many, including Lee Ermey, hold the theory that the name goes back to the character Eugene the Jeep from the Popeye comic strip . This dog-like mythical creature preferred to feed on orchids and could walk through walls and ceilings, climb trees and fly - so it was able to appear wherever it wanted. In addition, it repeatedly helped the protagonist Popeye out of awkward situations. It is believed that the soldiers were so enthusiastic about the capabilities of the new vehicle that they named it "Jeep", referring to this cartoon character.

In the probability ranking of all these derivations from Jeep , Eugene the Jeep has first place. Because in the tender of June 27, 1940 by the US Department of Defense for the construction of the military vehicle, there was never any mention of a General Purpose Vehicle (GP), but only a "1/4 ton 4 × 4". The only manufacturer who nevertheless used the abbreviation GP for its product was Ford (but not for general purpose ).

The chief test driver at Willys-Overland , Irving Red Hausmann, first made the name Jeep public - in February 1941, when he presented "his" Jeep to the press. It is said that he drove up the steps of the Capitol in Washington in a jeep at the press launch - accompanied by Washington Daily News journalist Katherine Hillyer. Back at the foot of the stairs, one of the spectators asked what kind of car that was. Hausmann: "It's a Jeep." Hillyer adopted this name for her article - and with it the name Jeep was established for all time and was even accepted as an official name by the military. The article with the photo of the Willys MB and Jeep in the caption appeared in the Washington Daily News on February 20, 1941.

The US Army jeeps 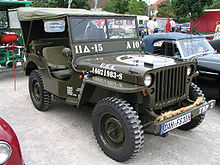 As early as 1938, the American Bantam company presented its BRC (Bantam Reconnaissance Car) to the US Army. While the army was enthusiastic about the capabilities of this light reconnaissance vehicle, they could not afford such a project at the time. With the beginning of the Second World War and the reports about the high mobility of the German army, however, there was a need for action for the army. So on June 27, 1940, a tender was launched with the requirement to design a 4 × 4 off-road vehicle with a ¼ tonne payload. Although this tender was directed to around 135 companies, the interest among the American automotive industry was negligible. It was simply not profitable for the manufacturers of agricultural vehicles and trucks at the time to meet the tight deadlines (construction plans and first prototypes within 49 days and 70 finished test vehicles after a further 26 days) and the demand for such a light vehicle, as they were usually large , heavy work machines. The Bantam company (it emerged from the US offshoot of a British small car manufacturer ), however, had enough experience with small, light vehicles - not least because of the aforementioned BRC. Since Bantam was in a big crisis and had to seize every opportunity to save the company from collapse, they did not hesitate and did everything in their power to meet the requirements of the Army, which was once again convinced of the qualities of Bantam. The Willys-Overland company, which was struggling with financial problems similar to Bantam, also took part in the tender, but - in contrast to Bantam - was unable to complete its prototype on time. 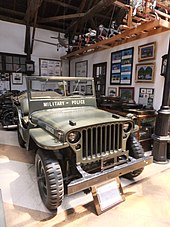 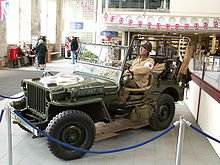 Willys MB in a British museum

However, since the need for the new vehicle was very acute and the small Bantam company with its only plant was too uncertain as a sole supplier, the Ministry of Defense also convinced Ford Motor Company to join the project. Although Ford hesitated at first, the Department of Defense finally managed to convince the company (albeit only after the decision to order 1,500 vehicles from each applicant). The three companies now involved now had the stipulation to produce 1500 vehicles each, which corresponded to the services of the Bantam. To make this possible, Ford and Willys-Overland were given access to the BRC's drafts, despite protests from Bantam. As a result, the three vehicles hardly differed from one another, both visually and technically.

After extensive testing, the Army decided on the "Willys MA" from Willys-Overland. The decisive factor here was the powerful "Go-Devil" engine, which, with 60 HP, was able to provide around 25% more power than the engine of the BRC-40. Willys revised the MA again based on the Ford GP and from then on produced the legendary "Willys MB" - a little more than 360,000 units had been completed by the end of the war. Ford once again took over the design of the Willys MB ( m ilitary model, variant B ) and produced the GPW (governmental, P for the 80 inch wheelbase and W for Willys, since Ford took the design for mass production) - Ford rolled up to the end of the war about 270,000 jeeps off the assembly line.

After the end of the Second World War, Ford stopped producing Jeeps. Willys-Overland, on the other hand, developed the successor to the MB, the M38, a few years later. This emerged from the civilian CJ-3A and was delivered to the US Army (1950–1952) with a reinforced frame, 24 V electrical system and some other military improvements with around 60,000 vehicles produced. The last jeep for the US Army was the M38A1 (1951–1971). This also achieved a high level of awareness, after all it was used until the 1970s (and therefore also in the Vietnam War), when it was finally replaced by the M151 MUTT .

The current descendant of the legendary Jeeps is now the HMMWV from AM General . Similar to the Jeep, a civilian version of this vehicle (usually called the Humvee by soldiers) was produced, from which a car brand developed: the Hummer . And analogous to the Jeep, the Hummer brand has since been sold to General Motors , but the group discontinued the brand in March 2010.

During the Second World War , Willys-Overland planned to market the Jeep civilian. On 17 July 1945, it was done: The first CJ-2A rolled off the assembly line ( C ivilian J eep). Since this did not have to comply with the military weight specifications, it could even be equipped with an improved drive train and an improved version of the Go-Devil engine. Soon other Willys vehicles were also being sold under the Jeep brand. The CJ series was continued until 1987, through the changing owners of the Jeep brand and also through some new model series (some of which were again influenced by military developments). The last model in the CJ series was the CJ-7 (and the longer CJ-8) which was replaced by the Jeep Wrangler (YJ) developed by AMC.

In 1950 Willys-Overland was finally awarded the sole trademark rights for "Jeep" in court after Bantam filed a lawsuit that they had used the term Jeep before Willys-Overland. Since then, the brand has changed hands several times. In 1953 Willys was bought by Kaiser-Frazer , and in 1963 the company was renamed Kaiser-Jeep. The American Motors Corporation bought the company at the 1970th In 1987, AMC was again bought by the Chrysler Corporation and became the " Jeep-Eagle Division ". When Chrysler and Daimler-Benz merged in 1998, the unprofitable Eagle brand was canceled. Since then, Jeep has been part of DaimlerChrysler AG , with the sale of Chrysler to Cerberus in 2007, the Jeep brand remained with Chrysler Group LLC. 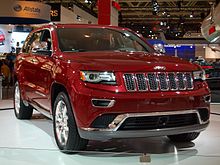 The Jeep Grand Cherokee built from 2014 to 2017 in the equipment version "Summit", from model year 2018 the second facelift model will follow.

The Jeep brand is now a division of the Chrysler Group, the marketing rights to the word "Jeep" and the distinctive O | O - grille design keeps with seven rounded long recesses. The first Willys MB had a different design (several flat struts made of steel strip ), but Willys-Overland soon adopted the nine-spoke radiator grille of the Ford GPW, as it weighed less than the classic "Slat Grill" from Willys.

However, Chrysler had to allow an exception for this design (after losing a lawsuit , at that time DaimlerChrysler): General Motors was allowed to use a similar design for its Hummer brand , as the Jeep brand was owned by at the time the HMMWVs (the military model of the Hummer) were developed AMC was. AM General (at that time a subsidiary of AMC) developed the “Humvee” in the early 1980s and was therefore allowed to fall back on the company's own Jeep design (at that time) . When AM General sold the trademark rights for Hummer to General Motors, GM also took over the right to use the said grille for this brand. However, the Hummer brand has not been produced since 2010.

Old military jeeps had or have 9 vertical slots in the radiator grille pressed from sheet metal. Modern SUVs only have 7 slots. The current (2018) logo of the Jeep brand shows a stylized 7 slits between 2 high headlights. ° ||||||| °

Classic models from the Jeep brand 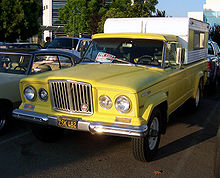