Excalibur Series I as a roadster 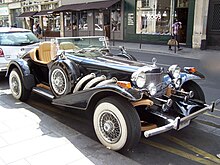 Excalibur Series III as a roadster

Excalibur Automobile Corporation is a US company and former automobile manufacturer . The company was in 1963 by Brooks Stevens (1911-1995) and SS Automobiles Inc. founded. The company is based in Milwaukee . The focus of activity was on the replicas of luxury automobiles from the 1930s, built using modern technology.

Stevens was a design consultant for Studebaker for many years . On the side, as it were, he had been dealing with classic automobiles since the 1950s. In 1951, on his own initiative, a roadster called Excalibur was created in the classic style, which was based on Studebaker technology. The car remained a one-off.

Stevens later took up the idea again and in 1963 put another roadster with Studebaker technology on the wheels. This vehicle was optically based on the Mercedes-Benz SSK from 1928. Studebaker was interested in a small series and showed it at some trade shows to test the audience reaction. Ultimately, however, the ailing company lacked the funds for projects of this kind.

Together with his sons David and William and in agreement with Studebaker, Brooks Stevens founded the SS Automobiles in 1964 , which dealt with the series production of cars with a classic design. The aim was in his own words, an Contemporary Classic to create a contemporary classic. At the end of 1964, the company started production of the only slightly revised prototype as the Excalibur Roadster. Only the cars in the first series were closely based on a specific model in terms of design; later series, on the other hand, had a more independent design, but were also reminiscent of classic Mercedes-Benz from the 1930s.

Excalibur was the first of its kind in the United States. Since the 1970s, the success of the Excalibur has pushed numerous other companies such as Clénet , Ron Sparks Coachworks or Elegant Motors (the latter with very accurate Duesenberg replicas) onto the market, which copied Stevens' concept and at least temporarily represented a serious competitor for Excalibur .

In the 1970s the company name changed to Excalibur Automobiles Corporation . In 1979 there were 90 employees and in 1981 there were 125. In mid-1986, bankruptcy followed . The Acquisition Company took over the remainder of the company for $ 2.3 million. Henry A. Warner became president. The new company name was Excalibur Marketing Corporation . A source says the Stevens family was involved. Production stopped in June 1990 when the company went bankrupt .

The German Michael Timmer bought the company in November 1991 for 1.33 million US dollars. He invested and prepared to restart production, but went bankrupt in early 1992 without having sold a vehicle. The company name for this short phase has not been passed down.

The German Udo and Jens Geitlinger took over and continued the vehicle production. They were connected to Sikkens Co. in Lichestein, Germany, and paid $ 1.7 million in 1991. In 1993 other products such as luggage racks, cabins and trailers were added to the range. Peter Reick was named as president of the company at the time. The production of cars ended in 1997. In 2000 the company went bankrupt. Another website confirms Jens Geitlinger as the owner.

Alice Preston from Camelot Classic Cars took over the leftovers in 2003. Preston himself gives the year 2001.

A total of over 3500 vehicles were built. Another source names exactly 3268 vehicles.

For the 1970 model year, Stevens presented a second edition of his "Contemporary Classic" with the Excalibur Series II . The body variants were still a Phaeton and a Roadster. The bodies continued to be based on the classic Mercedes-Benz design, but implemented the template much more freely than the Excalibur Series I. The new cars rested on their own chassis designed by Stevens' son David. The Corvette provided the drive technology. Excalibur initially used the 5.7 liter eight-cylinder engine from General Motors . For the 1973 model year, Stevens changed the drive units to "Big Block" 7.4 l, also from General Motors.

A third series of the Excalibur was launched for the 1975 model year. Apart from minor modifications, the design of the Excalibur Series III was the same as that of the Series II; the Roadster and the Phaeton were also offered. The cars were fitted with massive aluminum bumpers at the front and rear. The front fenders were now covered on the sides to reduce the risk of injury. The engine had less power due to American emissions regulations. A special design detail of the Series III was the use of light units from the VW Beetle : the Beetle's indicators were on the front fenders, and the rear fenders carried the large round taillights (so-called elephant feet) of the VW Beetle 1303.

In 1980 the Excalibur Series IV was presented. The cars were significantly larger than their predecessors. The wheelbase grew by more than 30 cm to 3170 mm. The design became more independent; you could clearly see that the bodies only hinted at the classic specifications.

The Excalibur Series V followed in 1986 . For the first time it was also available as a sedan and Pullman sedan . The model was largely based on the Series IV.

Of the Excalibur Limited Edition 100 , Excalibur had planned a small series of 100 vehicles, of which only about 27 were produced. The vehicle was significantly lighter and more compact than the Series IV & V. The design is reminiscent of an Excalibur Series III Phaeton.

Among the German owners, the Excalibur JAC Cobra was also a replica of the AC Cobra .