Weather protection on a 1922 Chevrolet 490 Touring

The touring car is a type of automobile that was popular from the beginning of the 20th century to the mid-1930s. In the United Kingdom it was also called (four door) open tourer , in France Double Phaëton and later Phaëton and in the USA touring or touring car . The name went out of fashion from the 1920s and the differences to the sportier Phaeton and Torpedo blurred.

A touring car was suitable for longer trips - hence the name - and had an open structure with usually four to seven seats in two rows, which were directly accessible via side doors. Variants with three rows of seats and nine to ten seats are also known, with the middle row then consisting of two individual seats with a passage. A technical requirement were pressed steel chassis to give these structures sufficient strength for the attachment of side doors. Early versions were also called side entrance touring in English to distinguish them from the tonneau with its rear entry.

Until the mid-1920s, the touring car was the most common type of automobile alongside the roadster . Only then did closed sedans and coupés appear on a larger scale , which were initially also referred to as inner handlebars to distinguish them from touring cars .

In contrast to the sedan, convertible sedan or four-door convertible ( convertible sedan , Berline transformable ), the touring car had no B- and C-pillars and no side window frames. Front doors did not open until around 1912. This version was initially called fore door touring in the USA . The first versions had no windshields , afterwards vertical or almost vertical windows, usually foldable, were used. Touring cars have a light, usually unlined soft top. Additional weather protection is provided by either side panels made of fabric with viewing slits, which are attached to the convertible top and the body or door, or, in later versions, side windows that are inserted like the roadster. Expensive versions sometimes have an additional tonneau windshield at the rear, which can be swiveled behind the backrest of the front seat bench using a complicated folding mechanism. 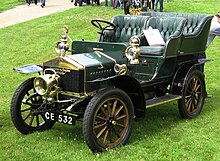 Corbin 4-pass. Runabout (USA, 1908). This design is also known as the Tourabout

A rare Roi-des-Belges Touring with front doors: Talbot Type 6AS (1910) 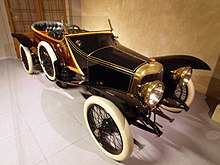 After the Second World War , the open touring cars were only available for use by the military or the police . These vehicles were called Kübelwagen and generally had side windows made of soft plastic.