The M14 is an American self-loading rifle , which the 7.62 × 51 mm NATO - ammunition verschießt. The rifle is also produced and used under license by the Republic of China as the T57 .

The M14 (.30 caliber rifle US M14) represents a further development of the M1 Garand , designated in the prototype stage as T44E4 , which was started by the state armaments company Springfield Armory (Massachusetts) after the end of the Second World War . It was introduced into the United States Army in 1957 as the new standard rifle and replaced the M1. The rifle was used in the Vietnam War. From 1967 it was gradually replaced by the XM16E1 / M16A1 . In the US armed forces in Europe , however, it remained in use for longer due to the NATO agreement on the standard caliber.

Today the rifle is only used in small numbers by special forces of the US armed forces and the police. However, due to the experiences in Afghanistan and Iraq , there is currently a clear tendency to use the M14 again in all US armed forces as a Designated Marksman Rifle (DMR) or as an Enhanced Battle Rifle (EBR) because of the stronger ammunition and thus higher penetration power and better effective range to use. 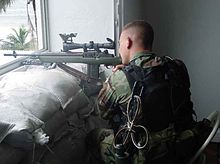 The M14 is an air-cooled, shooting gas pressure charger with a twist lock. The ammunition is fed from a changeable box magazine. The breech is the same as that of the M1 rifle; However, a roll was installed between the closure and connecting rod, which reduce the friction between these components and thus when M1 occurring with insufficient lubrication stoppages prevent should. The gas system does not have a gas pressure regulator; the gas piston has only a short stroke, i.e. that is, it moves a shorter distance than the push rod and shutter. The gas cylinder is located under the barrel parallel to the barrel axis. The hollow gas piston is located in the gas cylinder and has an opening in the side wall that corresponds to the gas extraction hole. If the projectile passes the barrel, part of the gas produced when the propellant charge is burnt enters the gas piston through the gas extraction hole and pushes it back. As a result of the movement, the holes no longer cover and no additional gas flows into the gas piston. The movement of the gas piston is transmitted to the closure via the push rod, which is rotated via a control cam so that the two locking lugs emerge from their abutments. The gas system has a shut-off device with which the supply of propellant gas can be interrupted in order to protect the system from damage when firing rifle grenades . The device for series fire consists of a short release lever which is rotatably mounted on a control shaft; the selector switch is located on the right side of the weapon above the trigger. A pull rod connects the release lever with the push rod. If the rifle is set for series fire, the push rod leading with the bolt hits a hook at the end of the pull rod and pulls it forward. This causes the trigger to operate the catch (which normally holds the hammer in place until the trigger is released). If the shooter has not let go of the trigger, the hammer snaps forward and releases the next shot.

Since the M14 is difficult to control in series fire due to its shaft shape, the low weight and the strong recoil of the ammunition used, the fire dialing device was blocked on most M14 so that only single fire can be fired.

The M14 is dismantled as with the M1: When the weapon is unloaded, the operator pulls out the rear end of the trigger guard and swivels it towards the muzzle. Then he can take the trigger group down and the system up out of the stock.

The magazine of the M14 can be loaded in the weapon from loading strips . A corresponding holder is located above the lock. The slide catch , which holds the slide in the open position after the last shot, is also used to fix the slide when loading with loading strips.

On the left side of the housing there are two grooves and a hole for attaching target devices. There is a bayonet wart on the flash hider. There is a fold-out shoulder pad in the piston cap; Cleaning and dismantling tools are housed behind a small flap in the piston cap.

The loose bedding of the system in the shaft, the gas system and some other details of the construction as well as the sometimes poor manufacturing quality have a negative impact on the M14's hit performance. The deployment in Vietnam also showed that the wooden shaft swells in a warm, humid climate. In order to be able to use the rifle in the national shooting competitions (National Match) in Camp Perry, selected M14s have been extensively revised; In the case of the rifles designated as M14 NM ( new model ), the system was inserted into a fiberglass bedding so that it could no longer move in the stock. The USAMTU (US Army Marksmanship Training Unit) revised the M14 NM even further for use as a sniper weapon. The revised rifle was called the M14 NM (Accurized) and served as the basis for the development of the XM21 sniper rifle (later M21 ).

In newer versions of the M14, a considerable part of the improvements incorporated in the NM / M21 have also been implemented.

The White House guards still wear the M14 today. The Navy Seals also use an M14, mostly in sniper equipment , and the M25 .