This article deals with small arms; Tube weapons, formerly or in other countries referred to as grenade launchers, can be found under mortars (guns) .

GMW 40 mm (GraMaWa) of the Bundeswehr

A grenade launcher is a grenade weapon that throws grenades further away than would be possible with the hand (see hand grenades ).

After the Second World War, hand-held grenade launchers ( Grenade Launcher ) were developed primarily in the USA , which should fill the gap between hand grenades and mortars , for example the M79 grenade launcher . Further developments took place in all armies, including in Germany, whereby the English name was taken over literally translated into German. With the introduction of these weapons in German-speaking countries, these designations overlapped with those of the infantry deep-fire guns. Therefore, the term mortar, previously only used for large-caliber high-angle weapons, was transferred to grenade launchers and the weapons described here were referred to as grenade launchers. 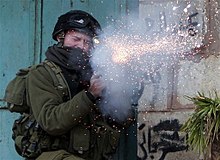 There are single-shot, semi-automatic and automatic grenade launchers, which are either used as a stand-alone handgun, mounted as an add-on weapon on a conventional assault rifle or used on a tripod or on a rotating ring mount as a heavy infantry weapon. What they all have in common is the firing of caliber projectiles from a launch tube in a ballistic trajectory. The grenade pistols also belong to the group of grenade launchers, as they represent independent firearms and are only built for the purpose of firing grenades. The name pistol is mainly derived from its compact dimensions. In the early stages of their development, oversized bullets were sometimes fired.

Rifle grenades are not tubular ammunition, but over-caliber projectiles that are fired from the muzzle of a handgun. Sometimes an attachment, the rifle grenade device, which is attached to the muzzle, is necessary for this. Rifle grenades were developed even before World War II.

Grenade launchers fire grenades in the "high-pressure-low-pressure system". The propellant charge is housed in a particularly thick-walled cartridge , in which it burns after ignition and generates high pressure. The resulting gases flow out of the chamber through narrow channels, whereby their pressure is significantly reduced. Only then do they drive the grenade out of the barrel at a relatively low muzzle velocity , with hand-held grenade launchers typically at around 75-80 m / s. Automatic grenade launchers on tripods fire grenades with a much stronger propellant charge at 210–240 m / s, as the recoil does not have to be absorbed by the shooter.

As caliber has been involved in NATO , the 40 mm grenade can enforce. Post-Soviet states use the 30 and 40 mm .

The first grenade launchers were stand-alone handguns that were only built for this purpose (for example the M79 ). The disadvantage was that the shooter could not defend himself with this weapon and had to carry a second weapon. For this reason, add-on weapons were developed that could be attached to normal assault rifles (for example the M203 ). The shooter is thus able to fire grenades in a single shot and to shoot projectiles with his assault rifle. Such weapons are also known as underflow grenade launchers , as they are usually mounted under the barrel of the firearm.

With a hand-held grenade launcher, it should be possible for the infantryman to fight opponents with grenades over greater distances without having to expose himself too much. The indirect high-speed fire can also be used to fight opponents behind cover. An automatic grenade launcher combines the effectiveness of a large-caliber grenade for infantry weapons with the firepower of a machine gun . In contrast to automatic cannons, the weapon remains transportable to a limited extent as it is transported in several parts. In addition, an automatic grenade launcher is also used as an on-board cannon for light military vehicles that are not or only partially able to control a machine cannon.