The title of this article is ambiguous. For the rotating ring mount HD 151, see there.

The rotating ring mount is a round, rotatable mount for heavy machine guns and automatic grenade launchers for mounting on and on vehicles. Its main component is a roller slewing mechanism - a horizontally aligned, more than shoulder-width steel ring that runs on a ring-shaped rail. Rotary ring mounts ( English : ring mount or gun ring ) are used on military trucks, various forms of tanks and in older multi-seat combat aircraft .

The weapon is mounted on a ring or pitch circle using a bracket. This ring, which can be rotated around its vertical axis, runs on guide rollers on a likewise circular track that is firmly connected to the vehicle. The mount generally allows the weapon mounted on it to be pivoted (rotated) through 360 °. The upper body of the shooter protrudes when using the weapon with head and shoulders or up to the waist or hips through the two rings of the mount. The holder for the weapon itself has a joint, so that the shooter has as large a swivel range as possible .

Use in land vehicles

In the case of military trucks, the rotating ring mount is attached to the driver's cab on the mostly round roof hatch above the passenger seat. To operate it, the co-driver / shooter stands on his folded seat, his upper body out of the roof hatch behind the weapon. In the case of tanks, the mount is also mounted over a hatch on the tower or on the top of the vehicle. 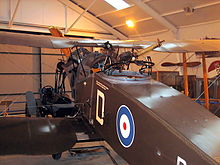 In some open, two-seat and multi-seat fighter aircraft models from the First World War , the gunner's or observer's place was also equipped with a rotating ring mount, for example the British double-decker model Sopwith 1½ Strutter , which was used by the Royal Air Force , among others was used.

In some medium- and long-range bombers from the Second World War , rotating ring mounts were also used , at least in the turrets inserted into the fuselage from above (English: top turret or dorsal turret ). As a rule, these machine gun cannons were rotated by means of an electric motor and had a plexiglass pulpit . Examples of this are the upper gun positions of the long-range bomber models Boeing B-17 and Consolidated B-24 of the US Air Force and that of the British long-range bomber of the Avro Lancaster type .