Aircraft is a redirect to this article. For information on aircraft for space travel, see spacecraft .

An aircraft is a vehicle that flies or drives within the earth's atmosphere .

The earth's atmosphere has no sharp upper limit to space . Flights below an altitude of about 100 km ( Kármán line ) are generally considered to be aviation , and flights above as space travel . Section 1 (2) of the Aviation Act (Germany) defines aircraft and aircraft classes .

Aircraft lighter than air float in the air ( static lift ) and aircraft heavier than air fly by creating dynamic lift . A distinction can also be made between aircraft with and without their own propulsion:

There are also aircraft that do not fit into these categories because they use neither static nor dynamic lift (see section # Heavier than air ).

According to the Aviation Act, unmanned aerial vehicles, rescue parachutes and air sports equipment are aircraft, as are spacecraft, rockets and similar missiles, as long as they are in the airspace. Devices that cannot exceed 30 meters above ground or water (e.g. hovercraft ) are not considered aircraft.

Definitions of individual subgroups of aircraft are internationally similar, but not identical. National classifications differ, for example, due to building regulations or weight limits.

History of the aircraft

The possibility of aviation “lighter than air” has long been known as hovering. B. ash rises in hot air. Building on this experience, the Montgolfier brothers built the first hot air balloon in 1783 . Aviation “heavier than air” only developed afterwards. It began with gliding flights in the 19th century . Albrecht Berblinger failed in 1811 when attempting to fly over the Danube due to adverse circumstances, despite a glider that was probably airworthy ; whereas the number of sliding structures completed by Otto Lilienthal from 1891 on is estimated to be at least 2000. 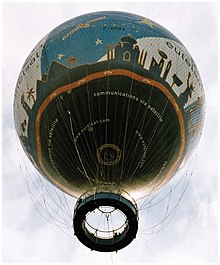 Aircraft with a lower density than air float in the air on a similar principle to how ships float in water . The reason is static buoyancy due to displacement, which is explained by the Archimedean principle . - "Lighter than air" is short for "lighter than the air displaced by the vehicle ". One speaks here of “driving” as opposed to “flying” the “heavier-than-air” aircraft.

The air is displaced by a less dense (specifically lighter) carrier gas such as helium , hydrogen or hot air . The lift arises from the difference between the weight of the entire vehicle and that of the air it displaces.

Gas balloons and hot air balloons have no drive and drift with the wind. Airships are aerodynamically shaped, equipped with engines and propellers and thus controllable. Impact airships (also called blimps ) are usually slightly heavier than air and require a small part of their propeller power for the remaining lift component.

Aircraft with a higher density than air cannot fly due to static lift; their static lift is usually negligible.

Instead, when flying, a lift force is usually generated by moving an airfoil in the air: the air currents cause dynamic lift . There are different types, the most important are airplanes with rigid wings and helicopters , which have at least one rotor (rotary wing). In helicopters, the driven rotor provides both the lift and the propulsive power; aircraft must have a minimum speed relative to the air in order to generate lift. There are also mixed forms such as vertical take-offs as tilt-wing aircraft or tilt-rotor aircraft . You can also find muscle power planes , gliders and paragliders .

Gyroplanes also have a rotor, which, however, is set in rotation passively by the airstream, and therefore need a separate engine or a towing device for propulsion. Among the helicopters with more than one rotor, the quadrocopter is gaining in importance, especially in model making and robotics.

Flying objects without static and without dynamic lift

31 As of December 2019, Germany had a total of 21,112 at the Federal Aviation Authority approved civil aircraft, to 4,210 aerodynamically controlled ultralight aircraft , 603 gyroplane and six ultralight helicopters in the air Sport offices of air sports associations, the German Aero Club and the German Ultralight Association registered are.

German aircraft have a registration number in the form D-XXXX. XXXX stands for four digits for gliders and four letters for all other aircraft. The letter following the 'D-' categorizes the type and, for some types, the weight of the aircraft, as listed in the following table.

According to Austro Control , the following number of aircraft are registered in Austria as of December 31, 2019:

According to the Federal Office for Civil Aviation (FOCA), there were a total of 3284 civil aircraft registered in Switzerland on September 25, 2019: