Impact airship of the WDL at the Essen / Mülheim airfield

Impact airships , also called blimps , are airships without a rigid internal framework. The airship hull is the container for the gas and the load-bearing system at the same time, which is similar to balloons . These aircraft get their aerodynamic shape from the shape of the shell and a slightly excessive internal pressure. Blimps are distinct from rigid airships , whose shape is maintained by a rigid inner skeleton.

The largest manufacturer of impact airships is still Goodyear . Impact airships are also known colloquially in German as "zeppelins", which is due to the fact that almost all airships flown over German soil from the pre-war period were actually zeppelins. Originally the concept of the zeppelin was limited to airships from the company Luftschiffbau Zeppelin or Zeppelin Luftschifftechnik , whose characteristic feature was a rigid or semi-rigid construction . In the past, however, such airships were also available from other manufacturers. 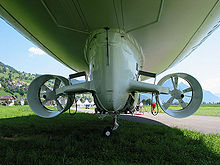 The ballonets are inflated via the air scoops behind the propellers

In the case of impact airships, changes in volume within the airship hull, which can result from fluctuations in air pressure or temperature changes in the carrier gas , are compensated for by ballonets . These ensure that there is always a slight overpressure in relation to the external air pressure in the envelope . As a result, the buoyant body always remains firm, so that the shape and tension of the airship hull is maintained. The technology and use of ballonets is essential for impact airships. The hull is namely the central support system of the airship. If the hull slackened, the controllability of the airship would be lost or severely restricted. Part of the air flow generated by the drive propeller is usually used to inflate the ballonet.

The gondola load is introduced via connection points directly on the airship hull. The tail fins, which also have no rigid connection to the nacelle, are attached in a similar manner. The motors are usually located directly on or in the nacelle. Some, but by no means all, models can pivot the propellers for easier maneuvering.

Nowadays, helium is used as the lifting gas . However, hydrogen was also in use until the 1960s .

Impact airships are the most commonly built airships because they are relatively easy to manufacture and can be easily transported after releasing the gas. However, their size is limited by the unstable shell. Impact airships with a volume of up to 20,000 m³ have proven their worth. With further enlargement and excessively long buoyancy, these airships threaten to buckle in the middle if there is insufficient internal pressure. Therefore considered as an alternative Kiel blimps or airships . Nevertheless, the smaller and cheaper impact airships had a variety of tasks in aviation and the military.

An airship as a tourist attraction over Lucerne

In contrast to the historical models, modern impact airships usually start with a little "overweight". The missing buoyancy force is generated by starting up and lifting the bow tip when starting with engine power. On the one hand, the slight excess weight makes it unnecessary to drop ballast on take-off, and on the other hand, no expensive lifting gas has to be released from the envelope for landing. However, the ships can also become lighter than air on longer journeys if they have used up a correspondingly large amount of fuel .

Hot air airships are a special form of impact airships . Like hot air balloons, they get their buoyancy from the difference in density between hot and cold air. In terms of their design and their possible uses, they are smaller and more limited than gas airships, but they are significantly more economical to operate.

Another very new branch in the airship industry are small, unmanned impact airships, which, in addition to advertising and aerial photography, are also used as relay stations for radio transmissions and pollutant measurements. Both remote-controlled and autonomously flying systems have been developed here and the first systems have been successfully flown and tested under everyday conditions.

The first impact airship was built by Henri Giffard in 1852 and powered by a steam engine.

The " Pilgrim " is considered to be the ancestor of modern impact airships . It was built by Goodyear in 1925 and already had most of the design features that are still common today.

ZMC-2 was an all-metal airship built in 1929. The sheath consisted of riveted 0.24 mm thick duralumin sheet . It was classified as an impact airship because an overpressure inside the float was necessary to maintain its outer shape. However, despite the innovative and promising concept, there was only one prototype .

The American ZPG-3W airships were until today (as of 2005) the largest impact airships in the world. Four ships of the type were built. They were used by the US Navy for air surveillance and had a large radar system inside the hull. Its volume was almost 43,000 cubic meters, with a length of about 123 m. They served from 1958 until the end of the US Navy airship program in 1962.

The etymological origin of the term blimp is obscure. Various theories are known, some of which may be attributed to folk etymology :

The term blimp thus originated from the joking contraction of "b) limp" to "blimp". An analogous, often heard explanation, which claims that the American military has divided its airships into "type A - rigid" and "type B - limp", can be made through the use of the term blimp prior to the division into A and B types be considered refuted in an English publication in 1916 .