ZPG-3W was an American type of impact airship that was built by the Goodyear company for the US Navy in the late 1950s . The airships were developed during the Cold War as part of the US early warning system to defend against Soviet ICBMs and were used over the Atlantic Ocean . The ZPG-3W ships are still the largest impact airships ever built; similar hull volumes of airships were only achieved again in the 2000s with the hybrid airship prototypes. 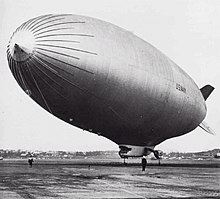 At the end of 1955, work on the mock-up was finished and the US Navy ordered four ZPG-3Ws. Among other things, they had a larger radar antenna , which, unlike their predecessors, was housed inside the shell. The first ship made its maiden voyage in July 1958 and was handed over to the Navy on December 18. The border patrols began on February 20, 1960. The last of the four ZPG-3Ws was delivered on April 4, 1960. The type ZPG-3W was the last type of airship that had been developed for the US Navy.

The airships were assigned to Airship Airborne Early Warning Squadron 1 (ZW-1), which also used other types of airship, in Lakehurst . The unit was part of NORAD's permanent radar surveillance system until June 1, 1960 . It closed the gap between the radar posts on ships of the US Navy ("DER" Radar Picket Destroyer Escort) at the so-called "Connection Barrier" (Contiguous Barrier) and the land-based radar stations of the "Inshore Barrier". From July 1960, the airships were only used for NORAD when needed.

On March 1, 1960, a ZPG-3W returned from a patrol flight over the North Atlantic after spending 49.3 hours at its observation post and a total of 58 hours in the air. This record exceeded the old maximum operating time of the previous model ZPG-2W by more than double.

In 1962 NASA was considering transporting the second upper stage of the Saturn rocket , the so-called S-IV, with ZPG-3W airships from its production facility at Douglas in El Segundo to Cape Canaveral . For this purpose, all unused equipment should be removed and a landing gear installed between which the rocket stage could be added. The alternative was to ship it through the Panama Canal. Nothing is known of the implementation of this idea.

In 1975 the ZPG-3W airship appeared in a list of projects for turboprop engines.

In the 1980s, the US Navy wrote out another radar early warning airship. Goodyear participated with a concept based on the ZPG-3W that was modernized with the improvements now available. A further development of the system of the E-2C Hawkeye was planned as radar . A prominent feature were additional propellers, electrically driven by the auxiliary power units, for the flight maneuvers during the surveillance mission. The crew should be 12 people. Some techniques, such as turboprop engines, were tried out on Goodyear's GZ-22 airship, which was originally intended to serve as a training airship. Ultimately, the contract went to Westinghouse for the Sentinel 5000 project, which was later canceled .

The nacelle, like that of the ZPG-2Ws, had two decks. The cockpit, flight stations and radar operators were arranged below. Upstairs was the galley, which even had a refrigerator, and sleeping quarters.

The airships were equipped with a 12.2 m (40 foot) diameter APS 70 search radar antenna inside the helium-filled envelope. This was a novelty. The previous types of airship mostly carried their smaller search radar antennas under the nacelle. The rotating search radar antenna was not directly connected to the nacelle, but was suspended from the top of the shell, on a platform on which the radar was placed to determine the height. Inside the shell there was a shaft made of rubberized fabric that connected the gondola to the installation on top of the shell. In this way, the altitude determination radar could be serviced or, if necessary, navigated astronomically. A window in the shaft was used to visually check the search radar inside the shell.

The nacelle of the second airship still exists today in the holdings of the National Air and Space Museum in the USA in the aircraft graveyard of Davis-Monthan Air Force Base .