The title of this article is ambiguous. Further meanings are listed under Long Island (disambiguation) .

Long Island [ ˌlɑːŋˈaɪlənd ] ( Eng . Long Island ) is an island that belongs to the US state of New York . It is located on the east coast of the United States , is about 190 km long and 20 to 32 kilometers wide. The area is 3566 km², which roughly corresponds to the area of Mallorca . Geologically, the island is a cold-age moraine with largely sandy, loose and rocky (less primary rock) soils.

From the time of the earliest European settlement in Long Island until the handover of the New Netherlands colony to the English , the western part of the island was under the Dutch jurisdiction, which also included the claim to the city of Oyster Bay , which the English in turn did not recognize .

The Plymouth Company (or Virginia Company of Plymouth) issued a deed of ownership for the entire island to William Alexander, 1st Earl of Stirling , in 1635 by order of Charles I. The following year, Stirling handed over the power of attorney to James Farrett so that he could dispose of the land. Four years later the Earl died and his grandson, who succeeded him, only survived a few months. The heirs returned the gift from the island to the crown. The settlers at the eastern end were left to their own devices and regulated their affairs accordingly. Acquisitions of land were made by the cities and were approved in the later years by the governor appointed by the Duke of York. Van der Donck says: In 1640 a Scot claimed Long Island. In 1647, Captain Andrew Forester of Dundee, Scotland claimed Long Island for the Stirling widow. In 1669 Charles II ascended the throne of England and John Winthrop, the governor of the Connecticut Colony, was sent to England for a charter. In 1642 he received a charter covering the territories of the states of Connecticut and New Haven. Now he was taking ownership of Long Island.

In January 1664 Major John Scott came to Long Island, endowed with some royal privileges, and formed the towns of Hempstead, Gravesend, Flushing, Newtown, Jamaica and Oyster Bay on the English model, with him as President, which probably means mayor. On March 12, 1664, Charles II gave his brother James, the Duke of York , by letter the lands that were occupied by the Dutch, along with Long Island. The Duke appointed Colonel Richard Nicolls as governor and the "New Netherland" of the Dutch were handed over to him on August 27, 1664. The 57-meter-high Wardenclyffe Tower , built in 1901, was an experimental, incomplete radio tower built entirely of wood by Nikola Tesla near Shoreham, on the northern coast of Long Island, USA.

The island in Downstate New York extends from the harbors of the city of New York into the northern Atlantic . To the north is Long Island Sound , which separates the island from Connecticut and Rhode Island . To the south are Great South Bay and Jamaica Bay ; smaller islands surround the coastline.

Long Island is divided into four counties from west to east . The two counties in the western part of the island, Kings County on the western tip and Queens County immediately east of it, are identical to the districts of Brooklyn and Queens (each to New York City); east of it join Nassau County in the central part of the island and Suffolk County in the eastern part. The residents of the city of New York, but also the residents of the two eastern counties, usually apply the term Long Island or the island ( the island ) only to the counties of Nassau and Suffolk, which are outside the city limits. 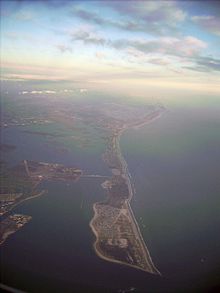 The east, where the island ends in two foothills, the so-called forks , is still partly used for agricultural purposes. The northern branch ends at its tip with Orient Point . There are many vineyards and horticultural businesses here.

In the southern foothills, which ends at Montauk Point , is the area of ​​the "Hamptons" with the names of the cities of Southampton, Bridge Hampton and East Hampton . The Hamptons are a popular destination for New Yorkers because of their beaches. Stars and wealthy New Yorkers have made their homes here. Fishing is a major industry on Long Island. 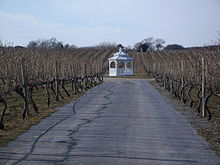 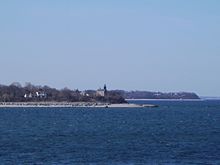 The road network is particularly dense in the west, in the New York districts of Queens and Brooklyn. As a main artery, the Long Island Expressway (LIE / Interstate 495 ) runs from New York City in the west to Riverhead in the east across the middle of the island.

Until the completion of the Brooklyn Bridge in 1883, the island could only be reached by water. There are currently ten road links to and from Long Island: the Verrazzano-Narrows Bridge to Staten Island ; Brooklyn-Battery Tunnel , Brooklyn Bridge, Manhattan Bridge , Williamsburg Bridge , Queens-Midtown Tunnel and Queensboro Bridge to Manhattan ; the Robert F. Kennedy Memorial Bridge to either Manhattan or the Bronx via Wards Island ; and the Bronx-Whitestone Bridge and the Throgs Neck Bridge into the Bronx. All of these road links are within the city limits of New York City on the far west of Long Island. Ideas for a connection by means of a bridge over or through a tunnel under Long Island Sound to improve the connection to New England have been discussed again and again in the past, but concrete plans are not currently being pursued.

Car ferries run from port cities to the neighboring mainland. A trip on the car ferry from Port Jefferson to Bridgeport , Connecticut, is popular with residents .

In addition to road connections, there are currently eleven subway and train tunnels in the New York districts of Brooklyn and Queens . The Long Iceland Railroad operates rail traffic on two major and nine minor roads of 1100 kilometers (700 miles) of track. Mainly used by commuters to and from New York City, this network is the most widely used public transport network in North America. The Counties Kings (Brooklyn) and Queens, which belong to New York City, also have a dense network of the New York Subway . 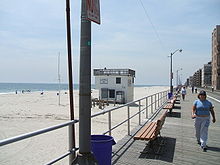 The Pollock-Krasner House and Studio in Springs, East Hampton, is now one of the United States' National Historic Landmarks

Long Island was and is also the residence of many artists. The writer F. Scott Fitzgerald lived on Long Island from 1922; here he also settled the title character of his novel The Great Gatsby .

The writer, screenwriter and director Michael Crichton grew up in Roslyn . John Steinbeck spent the last years of his life in Sag Harbor .

The painter Jackson Pollock moved in 1945 with his wife Lee Krasner , also a painter, from New York to Springs, a district of East Hampton , which was a popular artists' colony at the time. There he created the famous Drip Paintings in his studio, which can be viewed today .

In the East Hampton district of Amagansett, Ruth and Costantino Nivola acquired a piece of land including a dilapidated wooden house in 1949. In addition to its renovation, Costantino Nivola built an experimental residential garden with the Austrian architect Bernard Rudofsky , which still exists today as well as the only murals that Le Corbusier realized in the USA in the house of the Nivolas. The couple Stefi and Frederick Kiesler, who were friends with the Nivolas, also regularly spent the summer months in the neighborhood .

In 1947 the photographer Horst P. Horst bought a piece of land in Oyster Bay Cove that had once belonged to the estate of the painter and glass artist Louis Comfort Tiffany , built a house there and laid out a landscaped garden .

In the late 1950s, the painter Willem de Kooning retired to Springs. In 1959 he bought a country house there, which he converted into a spacious studio and moved into in 1963.

In the 1960s, the writer Philip Roth and the draftsman Tomi Ungerer shared a vacation home on Long Island.

In 1970 the painter Roy Lichtenstein moved to Southampton and set up a studio there.

The Swiss writer Max Frisch spent a weekend in Montauk on the eastern tip of Long Island in May 1974 with a young acquaintance and described this in his eponymous autobiographical story .

Ritchie Blackmore , the former guitarist of Deep Purple , also lives on Long Island with his partner Candice Night, who was born here . The musician Billy Joel grew up in Levittown , a district of Hicksville , and still lives on the island today. His first album is named after Cold Spring Harbor , a small community on the north coast of Long Island.

John Petrucci , the guitarist of the American progressive metal band Dream Theater , also lives on Long Island with his wife Rena Petrucci and their three children. He was born here too.

The writer and journalist JR Moehringer spent his childhood in Manhasset , where his autobiographical novel Tender Bar is set. Literary critic and science journalist Merle Rubin grew up in Plainview , a parish in Nassau County .

The north coast of the island from Sands Point and Glen Cove via Oyster Bay to Huntington Bay has been known as the Gold Coast since the 1910s , as a particularly large number of New York millionaires built large country estates here. Among other things, Huntington is home to America's second largest private home , Oheka Castle , which was built by Otto Hermann Kahn from 1919 to 1921 and has 125 rooms. The architect Stanford White was a preferred builder for this type of New York upper-class mansion in the late 19th century. Winfield Hall and Hempstead House are well-preserved monuments from this period . Also famous is the Château des Thons in Upper Brookville, which was imported from France by Ashbel H. Barney in 1928.

The writer F. Scott Fitzgerald set a literary monument to this part of Long Island in his novel The Great Gatsby , whose fictional palace in West Egg was inspired by the Vanderbilt family's Beacon Towers in Sands Point .

The Hamptons on the eastern tip of Long Islands have also been a Mecca for the super-rich for many decades and are primarily used by wealthy Americans as a weekend or summer residence. Numerous billionaires as well as personalities from industry, finance, film and television have their domiciles here. The most famous owners of a property include u. a. Mariah Carey , Steven Spielberg , Tiger Woods and Jennifer Lopez . The Hamptons property prices are among the highest in the world.

Plum Island is located northeast of Long Island and is a well-known biological research area.

Long Island has the largest cemetery in the world by area. The Calverton National Cemetery is 1045 acres , the equivalent of 4.23 km². For comparison: the Hamburg-Ohlsdorf cemetery is 3.91 km², the Vienna Central Cemetery is 2.5 km².

→ Main article : List of sons and daughters of Long Island