This article deals with the title of nobility. For additional meanings, see Duke of York (disambiguation) . 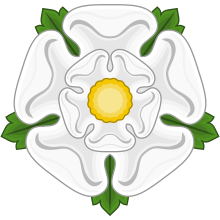 Duke of York ( English Duke of York ) is a hereditary British title of nobility , which is usually bestowed on the second son of the ruling British monarch , unless a descendant of a deceased duke leads him. The headquarters were at Fotheringhay Castle . Prince Andrew , the second son of Queen Elizabeth II , currently has this title (since 1986).

The title was first introduced in the Peerage of England by Edward III. on August 6, 1385 to his son Edmund , who became the founder of the House of York with the coat of arms of the White Rose, while the House of Lancaster was founded by his older brother, Johann , with the coat of arms of the Red Rose. (For the struggle of both houses for the English crown (1451 to 1485) see the article Wars of the Roses ).

With the death of Edmund in 1402, the title passed to his son Edward of Norwich . He died childless in 1415; nevertheless, the title did not immediately pass to his nephew Richard Plantagenet, 3rd Duke of York, after his death , because his father, Richard of Conisburgh, 1st Earl of Cambridge , the younger brother of Edward, was charged with treason against King Henry V in 1415 . convicted and executed. However, Richard managed to get the title back in 1425. After his death, his son Edward inherited the title in 1460; a year later he became King of England as Edward IV, the dignity united with the crown.

The second award on May 28, 1474 went to the second son of King Edward IV , Richard , one of the two princes in the Tower (the other was his brother Edward ). Richard passed away without an heir, and the title expired upon his death.

The next bestowal took place in 1494 to Henry VIII , the second son of Henry VII. With the death of his brother Arthur Tudor , Prince of Wales , he became heir to the throne and in 1509 ascended the English throne as Henry VIII. Title and crown coincided again.

The fourth bestowal took place on January 6, 1605, to Karl Stuart , the second son of King James I. When Charles' older brother, Henry Frederick Stuart, Prince of Wales , died in 1612, Karl became heir to the throne and in 1625 as Charles I, King of England. The title and the crown coincided again.

For the fifth time, the title was awarded to Jakob Stuart , the second surviving son of Charles I , on January 27, 1644 . This was raised on May 10, 1659 to the Earl of Ulster and on December 31, 1660 to the Duke of Albany . After his older brother Charles II died without an heir, James Stuart succeeded him as James II on the throne and reunited title and crown.

Henry Benedict Stuart (1725-1807) was by his father, the Catholic pretender to the throne and titular king James III. 1725 also raised to Duke of York. He lived in Italy as a cardinal of the Catholic Church and called himself Cardinal Duke of York from then on . From 1788 he was himself a pretender to the throne. His title was recognized by the Pope, Modena, France and Spain, but could not be enforced in the British Isles and expired on his death in 1807.

Duke of York and Albany

At the next bestowal on July 5, 1716, the title was Duke of York and Albany and was in the Peerage of Great Britain . The Dukedoms York and Albany were united in the title. The award went to Ernst August , Bishop of Osnabrück, the younger brother of the British King George I and son of Ernst August, Elector of Hanover . Together with the Dukedom he was awarded the subordinate title of Earl of Ulster . Ernst August died without an heir, which is why the titles lapsed.

The second award of the title Duke of York and Albany , along with the subordinate title Earl of Ulster , took place on April 1, 1760, to the second son of Friedrich Ludwig of Hanover, Prince of Wales , Eduard August , the younger brother of King George III. Eduard died in 1767 unmarried and without an heir, the titles expired.

The third and final award of the title Duke of York and Albany , along with the subordinate title Earl of Ulster , was given on November 29, 1784 to Frederick August , second son of King George III. Friedrich also died without an heir, which is why the titles expired.

Then the title Duke of York was awarded again. The sixth award concerned the second son of King Edward VII , George , who received the title after the death of his older brother and heir to the throne Albert Victor, Duke of Clarence and Avondale , on May 24, 1892. When Georg became king as George V, the title merged with the crown.

The seventh award of the title on June 3, 1920 went to his second son Albert , the younger brother of the future King Edward VIII. After Eduard had laid down the crown, Albert was named Georg VI in 1936. King and once more united title and crown.

The last time the title was awarded to Prince Andrew , the second son of Queen Elizabeth II, was on July 23, 1986 . Along with the Dukedom he was awarded the subordinate titles Earl of Inverness and Baron Killyleagh . To date, Prince Andrew has only two daughters. If he does not have a legitimate son by the time he dies, the title will expire again.

Apart from the first award, the title only had one holder who either ascended the throne or died without an heir.

There is currently no title inheritance.