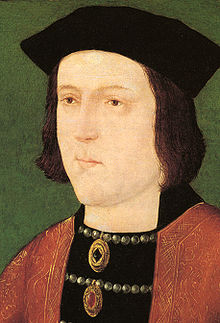 Eduard was the eldest son of Richard Plantagenet, 3rd Duke of York , and his wife Cecily Neville . Richard had a well-founded right to the English throne, in his view even greater than King Henry VI. himself. Henry's grandfather, Henry IV. , had been appointed king by the English parliament in 1399, although his cousin Edmund Mortimer, 5th Earl of March, as a representative of an older family line, had the greater right to succession to the throne. Edmund was only eight years old at the time, however, and a child on the throne seemed too risky for the English barons. The Mortimer line came from the second eldest surviving son of Edward III. , Lionel of Antwerp, 1st Duke of Clarence , from, Heinrich VI. was the great-grandson of Edward III's third eldest son, John of Gaunt . Eduard was the great-grandson of Edmund of Langley , the fourth son of Edward III, and through his grandmother Anne Mortimer , Edmund Mortimer's sister, also the great-great-grandson of Lionel of Antwerp. In Eduard, the claims to the throne of the second line (Clarence-Mortimer) and the fourth line (York) of the Plantagenet royal family were united, while Henry VI. to the third line ( House of Lancaster ) and called his kingship, which has existed for three generations. The clashes between them and their sympathizers went down in English historiography as the Wars of the Roses .

Assumption of power and first years of government

Edward's father Richard fell early in the Wars of the Roses in 1460 at the Battle of Wakefield , shortly after Henry VI. had recognized him as his successor under pressure. Eduard, then 18 years old, took over the management of the York house instead of his father. The powerful Northern English magnate family Neville also supported the Yorkists under Richard Neville, 16th Earl of Warwick , known as the Kingmaker . But this had to accept a defeat against Lancastrian troops at St. Albans .

Eduard, however, had his first brilliant victory at Mortimer's Cross at the beginning of February 1461 . Immediately before the battle, he had succeeded in forcing his army, which was panicking in the face of a mirage that showed three suns, on the offensive. This incident established his honorary name Sunne in Splendor . Together with Richard of Warwick , Eduard inflicted a devastating and therefore decisive defeat on the Lancastrian troops on Palm Sunday 1461 in the Battle of Towton . On June 28th he was crowned King of England as Edward IV. As a result, the rule of the House of Lancaster (red rose) passed to the House of York (white rose). The initial phase of his reign was crowned with successes: Lancastrian uprisings in Wales and northern England were put down, Scotland forced to peace and finally the insane Henry VI. imprisoned in the Tower of London .

The climax of the Wars of the Roses

Meanwhile, the House of Lancaster went into exile in Scotland under the leadership of Queen Margaret of Anjou , wife of Henry VI. Together with her son Edward of Westminster , the Prince of Wales , she gathered troops for a Lancastrian counter-offensive. The time seemed to come when Richard Neville moved from York to Lancaster in 1470. He did so because Edward IV secretly married Elizabeth Woodville on May 1, 1464, without the knowledge of his advisers in Grafton Regis . In the previous three years, Neville had tried to get a marriage between Eduard and Bonne of Savoy , sister-in-law of the French King Louis XI. to negotiate. When it became known in September 1464 that the king had already married, the Earl of Warwick felt betrayed and humiliated.

Elizabeth Woodville, who was several years older than her, came from the European nobility through her mother Jacquetta von Luxemburg , but was herself only of chivalrous blood because her father Richard Woodville, 1st Earl Rivers , belonged to the lower English knighthood. Her first husband, Sir John Gray , had belonged to the Lancastrian camp.

In 1469 there was a final break between Edward IV and Richard Neville. This retired to Calais , accompanied by Edward's younger brother George Plantagenet, 1st Duke of Clarence , who shortly afterwards married Neville's eldest daughter Isabella . At the same time, Richard Neville sparked an uprising against the Crown under Robin of Redesdale in northern England and allied himself with the House of Lancaster under Margaret of Anjou. The insurgents won on July 26th at Edgecote against a royal contingent, which was commanded by Edward's father-in-law Earl Rivers and his son John Woodville . Richard Neville had the two executed immediately. Richard's brother, the Archbishop of York , George Neville , was able to imprison Edward IV himself in Middleham Castle . Since the king remained extremely popular, Neville had to release him in October. Another attempt at insurrection the following spring failed. Richard Neville and George Plantagenet had to flee to Calais again.

In this situation, Neville seems to have turned from his plan to make George the new king and from now on directly supported the House of Lancaster with the still living Henry VI. In July 1470, Richard Neville and Margaret of Anjou met to resolve the reinstatement of Henry. In addition, said Louis XI. financial and military support for the project. In view of this overwhelming power, Edward IV and his brother Richard (Duke of Gloucester and later King Richard III ) went into exile in Alkmaar in Holland in October 1470 .

The House of Lancaster seemed to have won the Wars of the Roses. Richard Neville and George Plantagenet made a grand entrance into London on October 6th. On October 13th, Heinrich VI. reinstated as king and parliament declared Edward IV deposed. In exile in Burgundy, however, this already began with the gathering of troops. In addition, after three daughters, Elizabeth Woodville had given Eduard a son and heir to the throne. His brother-in-law, Duke Charles the Bold of Burgundy , promised him money and troops in January 1471. The "kingmaker" Richard Neville had meanwhile also lost the last of the sympathies among the Londoners who supported Eduard. The insanity of Henry VI. emerged clearly in his few official appearances, Clarence was politically completely uninterested and Margarete was in France. On March 14, 1471 Edward IV and his brother Richard landed at Ravenspur and marched towards London. Shortly thereafter, Clarence met his brothers, received forgiveness from Edward, and rejoined the York house.

The following Easter was bloody. Richard Neville was killed in the Battle of Barnet in April 1471 , but the decisive battle between the forces of York and Lancaster took place on May 4th at Tewkesbury. Not least because of the military inexperience of Edward, the son of Henry VI, who had come to England with his mother and a French army, the battle of Tewkesbury was a crushing defeat for Lancaster. The prince himself was slain while on the run, possibly executed by Clarence, important Lancastrian leaders, after a show trial. Margaret was captured by Edward IV. The night after the victor had moved into London, Henry VI. murdered in the Tower. With him the line of the Lancasters died out.

Edward IV was sovereign of the Order of the Garter and to consolidate his alliance with his brother-in-law, Duke Charles the Bold of Burgundy , he was elected to the Order of the Golden Fleece in 1468 and accepted in 1470.

The last years of government

Almost immediately new arguments began, this time between Edward's two younger brothers, George and Richard. As Isabella Neville's husband, George was entitled to half of the extensive Neville estates that had been confiscated from the Crown. Because of the death of his brother-in-law Edward, Prince of Wales , who was married to the younger Neville daughter Anne , he claimed the entire inheritance. Here, however, the nineteen-year-old Richard came in, who wanted to marry Anne. George could not completely suppress Richard's claims for the time being, but made his approval of the wedding in February 1472 dependent on the massive allocation of political offices and Neville lands by Edward IV. Richard was finally allowed to marry Anne, but was given relatively modest estates and offices in northern England. There he succeeded in building a stable power base in the years that followed, especially in the formerly Lancastrian city of York.

In the meantime, George sank further and further in the favor of his brother Edward IV. After the death of his wife Isabella in 1476 he tried to arrange a wedding with Maria, the heiress of Burgundy, which Edward forbade him. Shortly afterwards, when he exerted undue pressure on the courts in several trials, Eduard initiated a high treason case against his brother. On February 18, 1478, George's death was announced. According to legend, as the last grace of his brother, he was allowed to choose his way of death: George Plantagenet , the Duke of Clarence, was drowned in a barrel of Malmsey wine.

After regaining his rule, Edward IV was also active again in foreign policy. Allied with the Duke of Burgundy, he advanced against France and landed near Calais in 1475, but quickly concluded with Louis XI. Peace and delivered Margaret of Anjou in exchange for extensive ransom payments to him.

Inside, Edward IV relied on knighthood and cities and took energetic action against the spiritual and secular lords. Clever financial management and strict collection of taxes and duties made him one of the richest princes of his time; through treaties with the Hanseatic League ( Peace of Utrecht (1474) ) and the Dutch, he sought to establish safety for shipping.

On April 9, 1483, Eduard died surprisingly after only a week's illness. He left the kingdom to his eldest son Edward V and appointed his brother Richard , who shortly afterwards called himself Richard III, to be the administrator. made king.

Edward IV had seven daughters and three sons from his marriage to Elisabeth Woodville:

His extramarital relationship with Jane Shore (1445– around 1527) remained childless.

With Lady Eleonore Talbot , the wife of Sir Thomas Butler († 1461), he had an illegitimate son:

With Elizabeth Lucy (née Waite) he had at least two illegitimate children:

He has had other illegitimate children whose mother is unclear, including: