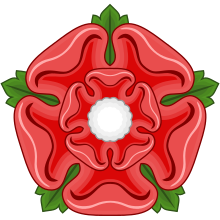 Lancaster red rose, symbol of the House of Lancaster

The House of Lancaster is a branch of the House of Plantagenet and an English royal dynasty.

John of Gaunt, 1st Duke of Lancaster , the founder of the line, was the fourth son of King Edward III. of England .

In 1399, Henry IV, the first Lancaster, came to the English throne after he had ousted his cousin Richard II . Henry IV's reign is marked by the difficult balance of power between royalty and the lords of the powerful noble houses, who tried to exert increasing influence on the government through parliament .

His son and successor Heinrich V had great successes as a general in the Hundred Years War against France and could for his son Heinrich VI. achieve that he was recognized as heir to the throne of the French king. These plans did not materialize, however, because the English soon lost their conquests in France.

When Heinrich V died, his son was a minor and the regents (the brothers of the late king) did not succeed in countering the high aristocracy's claims to power. The result was a civil war, the so-called Wars of the Roses , in which the House of Lancaster and the House of York fought for power with varying degrees of success. This war ended with the accession of Henry VII , the first king of the House of Tudor , who was descended on his mother's side from the Beauforts , also descendants of John of Gaunt.

See also : Family Tree of the Houses of Lancaster and York

For the family tree of the descendants from John of Gaunt's 3rd marriage, see House Beaufort