Plantagenet is a redirect to this article. For the French soccer player, see Marie-Agnès Annequin-Plantagenet . 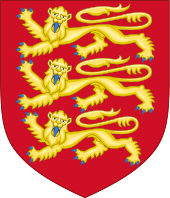 The House of Anjou-Plantagenet ( French [ ɑʒu-ˌplɑtaʒ'nɛ ] English [ ɑːn'ʤuː-plæn'tæʤənɪt] ) was a French-born dynasty, which from 1154 to 1399 in a direct line and to 1485 in the secondary lines Lancaster and York , the kings posed by England . In addition to the French ruling family of the Capetians and the imperial houses of the Ottonians , Salians and Staufers , the Plantagenets belong to the most important dynasties of high medieval Western Europe.

In the male line , the family continues to exist in the Somerset-Dukes of Beaufort , who descend from the Beaufort hybrid line.

Establishment of the House of Anjou 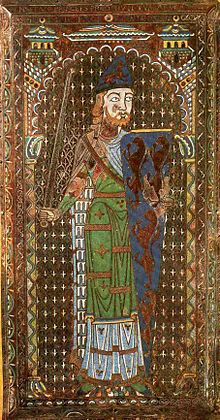 The direct male line of the Plantagenet dynasty can be traced back to Gottfried Ferréol , who is documented as Count of the French Gâtinais landscape in the 11th century . Presumably he himself was a member of the clan from which the Vice Counts of Châteaudun and Counts of Le Perche had emerged. Through his marriage to the heiress of the County of Anjou , Gottfried Ferréol secured his descendants possession of this feudal principality, which was already important in western France at the time. As early as the first half of the 12th century, the family rose to royal dignity in the Crusader Kingdom of Jerusalem .

According to Anjou, the family was usually referred to simply as the "Angevin Dynasty" or "House of Anjou" during the Middle Ages . It is not to be confused with later dynasties of the same name, which descended from the French royal family of the Capetians - see older house Anjou (Anjou-Capet) and younger house Anjou (Valois-Anjou).

Count Gottfried V von Anjou († 1151), who was given the nickname “Plantagenet” by chroniclers during his lifetime, is considered to be the namesake and actual ancestor of the Plantagenet family . This goes back to the count's habit of wearing a broom twig (Latin: planta genista ; French: plante genêt ) as a crest. It is also possible, however, that the epithet is derived from the fact that Gottfried planted gorse bushes on his land to protect himself from privacy when hunting.

With Count Gottfried Plantagenet the rise of his family to the leading dynasty in France began alongside the Capetians, of which they were formally vassal. Through his marriage to the heiress of the Anglo-Norman Empire, the "Empress" Matilda , the Angevines secured a claim to the Duchy of Normandy and the Kingdom of England , which they only had to enforce against the House of Blois in a war of succession (The Anarchy) . Gottfried Plantagenet conquered Normandy in 1144, and after a contractual agreement with King Stephan in 1154 , his son was finally able to ascend the English throne as King Henry II. Short coat , which his descendants held until 1485.

The name "Plantagenet" was used throughout the High Middle Ages until the late Middle Ages only in relation to Gottfried V of Anjou and not to the family he descended from. It was not until the Wars of the Roses (1455–1485), when the Angevin sidelines Lancaster and York fought for the crown of England, that this name was used to strengthen claims to power. Duke Richard of York († 1460), head of the House of York, took the name Plantagenet in 1448 to underpin his claim to the throne against the ruling House of Lancaster. Since then, this name has been used in the historical literature for the entire royal dynasty from King Henry II.

Through his marriage to the Duchess Eleanor of Aquitaine, Gottfried's son Heinrich II. Kurzmantel completed the amalgamation of the essential areas that are now collectively referred to as the " Angevin Empire ". In addition to England and its Scottish-Irish neighbors, this territorial conglomerate also ruled the entire west of France and thus represented one of the most important state structures of the high Middle Ages in Europe for two generations. The Angevin dynasty was at times more powerful than the French kings from the dynasty the Capetians, to whom they were formally committed to allegiance for their French possessions as vassals. However, this loose structure, supported only by the feudal state idea, broke up during the reign of Johann Ohneland , the youngest son of Henry II, who in a war with the French King Philip II in 1204 gave almost all of French property, including the Angevin ancestral land, to the lost French crown.

With the exception of a French fiefdom, the Duchy of Guyenne (Gascogne), the Angevin rule was henceforth limited to the English kingdom, which in the further course of the 13th century was reflected in the development of an insular mentality, an English national consciousness, in the French-born royal family and nobility . During the reign of King Henry III. The decisive constitutional course was set, which initiated the development of the parliamentary system that is so characteristic of England today. Due to his maternal descent from the Capetians, King Edward III. 1337 to lay claim to the French throne, although the French line of succession precluded the inheritance of such claims through the female line ( Salian law ). Ultimately, this triggered the Hundred Years War , which again closely linked England and its royal family with the historical fate of France.

In 1400 the last direct Plantagenet died with King Richard II. His successor was his cousin Henry IV , a paternal grandson of Edward III, from the House of Lancaster . In the middle of the 15th century the Hundred Years War came to an end without the English kings being able to win the crown of France, although they maintained their claim to it in their titulature for several centuries. This was accompanied by the outbreak of the Wars of the Roses , a war of succession between the House of Lancaster and their cousins ​​from the House of York , which was also run by a son of Edward III. descended from. The last Plantagenet king of England was Richard III. from the house of York. He fell on August 22, 1485 in the Battle of Bosworth Field , the final clash of the Wars of the Roses, against his rival Henry Tudor, who then ascended the throne as Henry VII and thus established the rule of the House of Tudor .

The Plantagenets after the loss of the throne

The two last legitimate born members of the Angevin dynasty were Edward Plantagenet, 17th Earl of Warwick , and Margaret Pole, 8th Countess of Salisbury , both children of George Plantagenet, 1st Duke of Clarence . Both were executed one after the other during the Tudor rule. The Plantagenets were not yet extinct in their male line. Descended from John of Gaunt, 1st Duke of Lancaster , and his longtime mistress Catherine Swynford , the House of Beaufort was descended from, whose relatives later adopted the name Somerset and are still present today as Dukes of Beaufort in the Peerage of England .

The House of Tudor of Welsh origin was related to the Plantagenet via the House of Beaufort in a female line, the mother of King Henry VII was Margaret Beaufort , over whom he could also formulate a vague claim to the throne. He also consolidated his rule through a marriage to Elizabeth of York , a daughter of King Edward IV of the House of York. As a descendant of the Lancaster and connected to a York, Henry VII and his son Henry VIII were able to stage the union of the two warring houses in their dynasty with propaganda.