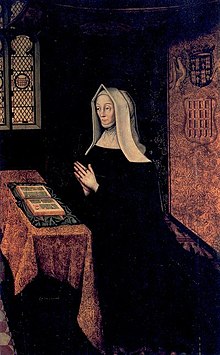 Margaret Beaufort , Countess of Richmond and Derby (born May 31, 1443 at Bletsoe Castle , Bedfordshire , † June 29, 1509 ), was an English Renaissance princess and mother of the future King Henry VII of England .

Lady Margaret was the only legitimate child of John Beaufort, 1st Duke of Somerset (1404-1444) from his marriage to Margaret Beauchamp († 1482).

In 1450, at the age of seven, she was betrothed to John de la Pole (1442–1492), who later became the 2nd Duke of Suffolk , but this connection was broken after a short time when her cousin Henry VI. gave guardianship over them to his half-brothers Edmund Tudor, 1st Earl of Richmond , and Jasper Tudor, Earl of Pembroke .

With an income of £ 1,000 a year Margaret was the richest heiress in England and also a direct descendant of John of Gaunt and Edward III. of royal blood - so a very good match. Henry VI, who had only one child, decided that his half-brother Edmund should marry the young girl in order to strengthen the position of the royal family. Edmund, who was more than twice his age, married Margaret, who was only twelve years old, on November 1, 1455. Twelve was the legal age for girls to be married. Margaret now lived with Edmund in Wales and became pregnant shortly before her 13th birthday.

Around the same time, the Wars of the Roses broke out between the Houses of Lancaster , to which Margaret and the King belonged, and York for the English throne. Edmund Tudor was tasked with securing Welsh castles for the king. In October 1456 he was captured at Carmarthen Castle , imprisoned and died of the plague exactly one year after the wedding . Margaret, now heavily pregnant and widowed, fled to live with her brother-in-law Jasper Tudor in Pembroke Castle .

There she gave birth to her son Henry Tudor on January 28, 1457, at the age of 13 . That both the child and the delicately built, not yet fully grown Margaret survived almost bordered on a miracle at a time when many women died in childbirth and the infant mortality rate was high. Margaret was so damaged in childbirth that she never became pregnant again despite two other marriages.

In 1458 she married Henry Stafford († 1471), the second eldest son of Humphrey Stafford, 1st Duke of Buckingham . When Pembroke Castle fell into the hands of York's followers during the Wars of the Roses, the guardianship of their five-year-old son Henry was sold to William Herbert , the new Earl of Pembroke .

In 1472, just a year after the death of Henry Stafford, she married Thomas Stanley, 2nd Baron Stanley .

Following the Battle of Tewkesbury in May 1471, in which her entire family was wiped out and Henry became the only living representative of the House of Lancaster overnight, Jasper Tudor brought the fifteen year old from Tenby to Brittany on June 2 .

After King Edward IV died around Easter 1483, his brother Richard, Duke of Gloucester , ascended the throne and had his two nephews locked in the Tower, Margaret got in touch with the widow of the previous king and arranged for her son Henry to be engaged eldest princess Elizabeth of York against the guaranteed support of Henry by the powerful family of the queen.

In the summer of 1483 the Duke of Buckingham also took their side. But before the end of September, King Richard found out about the plans - the coup was blown and Buckingham was executed. Margaret escaped this fate only thanks to the influential family of her third husband, Thomas Stanley, 1st Earl of Derby . Instead, her servants were removed from her and all contact with her son was cut off. But she still convinced her husband, and when Henry landed in South Wales in August 1485, he could be sure of the support of the Stanleys. After the victorious Battle of Bosworth , Thomas Stanley was rewarded with the title of Earl of Derby and Margaret was given the tutelage of Edward Stafford, 3rd Duke of Buckingham , the son of her former ally.

The parliament of 1485 declared her “an independent person” and gave her power of disposal over her enormous fortune, she was also granted the right to sign “Margaret R” and to call herself queen widow.

In 1486, another of their plans came true when on January 18 their son Henry VII married Edward IV's daughter Elizabeth of York, a union that united the two rival noble houses of York and Lancaster and thus marked the end of the Wars of the Roses. In 1488 Margaret was accepted as a Lady in the Order of the Garter by her royal son, who is said to have been very devoted to her throughout her life . Following this, Lady Margaret withdrew from political life and turned to domestic life. She was particularly interested in the precisely defined processes of birth, baptism and nursery of her granddaughter. She wrote down precise instructions on how all the rooms should be furnished, who should be present at the various events and how the nursery should be organized.

Margaret was in charge of the administration of hers and that of her ward, the Duke of Buckingham, and it is certain that she did this very conscientiously, for by the time the Duke came of age he was considered one of the richest men in England. She also made generous donations to Christ's College at the University of Cambridge and founded St. John's College there .

Margaret is described as a tall and dignified person. She was very intelligent and well-read, spoke French fluently, and regretted not having learned Latin all her life. She was known to spend hours in prayer and meditation each day, to hear four or more kneeling masses daily, and to spend a quarter of an hour in the chapel before going to bed. She strictly adhered to the rules of fasting and limited herself to one fish meal a day before Easter. Next to her son, religion was the most important part of her life. 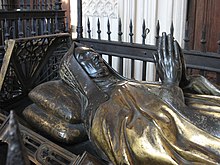 Portrait of Margaret Beaufort on her grave in Westminster Abbey

After Queen Elizabeth of York died giving birth to her seventh child in February 1503, Henry aged considerably and his health deteriorated rapidly; he lived for six more years, but passed away in April 1509 at the age of 52. His mother, Lady Margaret, survived only a short time - she came to London in June of that year to attend the coronation of her grandson Henry VIII and lived in the home of the Abbot of Westminster. There, in the midst of the post-coronation festivities, she died on June 29, 1509 at the age of 66 and was buried next to her son and daughter-in-law in the chapel of Henry VII in Westminster Abbey .

Margaret Beaufort appears in Philippa Gregory's novel The Constant Princess (German title: The Eternal Princess ). Here she is a domineering old lady who, with her rigid rules , keeps the young couple Arthur Tudor and Katharina von Aragón separated from one another, since in her opinion the two are still too young to have conjugal intercourse. In Philippa Gregory's latest novel The Red Queen , a fictionalized version of Margaret Beaufort's life story up to the victory of her son Henry VII over Richard III. tells. She also plays an important and continuous role in Rebecca Gablé's novel The Game of Kings , which deals with the time of the Wars of the Roses.