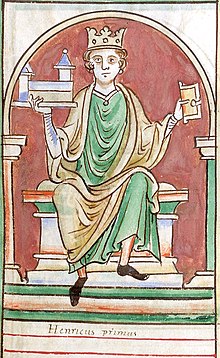 Portrait of Henry I from the Chronicle of Matthew Paris

Heinrich was the youngest son of Wilhelm the Conqueror and his wife Mathilde of Flanders . He ruled as the successor to his brother, Wilhelm II , called William Rufus . Heinrich received the nickname "Lion of Justice" (English Lion of Justice ), because his rule was characterized by a self-imposed power restriction of the crown. In addition, the acceleration of administration, the reunification of his father's domains and the controversial decision to appoint his daughter Matilda as his heir are remembered from his reign .

Henry I was born between May 1068 and May 1069, believed to be in Selby , Yorkshire , England . As the youngest son of the family, he was supposed to be a bishop and got an excellent education - as good as it was possible for young nobles. However, contrary to the original plan, he was knighted at the age of about 18. He is believed to be one of the few Norman regents who spoke fluent English. According to tradition, he was of average height, stocky, obese with age, and had thinning, dark hair.

With the death of his father, Wilhelm the Conqueror, in 1087 the land was divided among his sons:

The two older brothers made a pact that if either of them died without an heir, both of their father's domains would be reunited under the surviving brother. When Wilhelm II died in 1100, however, Robert was still on his way back from the First Crusade . His absence, coupled with his bad reputation among the noble Normans, paved the way for Henry to take control of the royal estate in Winchester . He was accepted as king by the leading barons and was crowned three days later, on August 5th, at Westminster . He secured his power in particular through the Charter of Freedoms , a predecessor of the Magna Charta , which he granted to the nobles.

On November 11, 1100, Heinrich I married Edith , a daughter of King Malcolm III. of Scotland . Since Edith was also Edgar Ætheling's niece , the marriage merged the Norman line with the old English line of kings. The marriage displeased the Norman barons, however, and as a concession to them, Edith changed her name to Matilda when she became queen.

In the following year 1101, Robert Curthose tried to recapture the crown with a campaign. This failed, and in the Treaty of Alton Robert recognized Henry I as King of England and initially returned peacefully to Normandy .

In 1105 Heinrich led an expeditionary army across the English Channel to avert the constant threat posed by Robert Curthose . In 1106 he defeated the Norman army in the devastating battle of Tinchebray . He had his brother incarcerated and incorporated the Duchy of Normandy as the property of England . So he united the old domains of his father. After prevailing against his brother, Henry supported the Norman conquest of Wales . He partly had to assert himself against the powerful Anglo-Norman barons of the border regions, whereby the king did not hesitate to ally himself with Welsh princes in the fight against his barons. After his barons had already brought large parts of South Wales under Norman rule, Henry himself led two campaigns against the Welsh principalities in 1114 and 1121. Under the influence of these campaigns, Wales remained largely under direct Norman rule, or at least suzerainty. It was only under King Edward I that Anglo-Norman rule over Wales reached the extent and extent it had in the time of Henry. After Henry's death, large parts of Wales rebelled against Norman rule . To the north, Henry I achieved security in Scotland in 1124 when his brother-in-law David ascended the throne . In contrast, he lost the Principality of Maine in France in 1113 to Fulko , Count of Anjou , and otherwise behaved defensively in his Norman territories.

As king, Heinrich I tried to implement social and judicial reforms:

In the field of church politics, Henry I got involved in the investiture controversy , just like a few years earlier in the Holy Roman Empire, Emperor Henry IV . While this dispute was raging on the continent, it could long be avoided in its full severity in England, despite repeated disputes. Henry's main opponent was Anselm von Bec , the Archbishop of Canterbury and thus the highest cleric in England. Heinrich insisted on the right to appoint (investiture) high-ranking clergymen as well as on the king's oversight of all pronouncements of synods and of the contact between English clergy and the Pope . Anselm von Bec, who had fled England under Wilhelm II, returned under Henry, but refused to receive the archbishopric from the king's hands and to give him allegiance. Violent arguments followed, at the height of which Anselm threatened the king with excommunication. At the Synod of London in 1107, Henry I then promised not to appoint any more bishops and abbots. However, the king supported church reform in other areas. So he provided the new monastic reform orders, especially the Augustinian canons and, towards the end of his rule, the Cistercians, with rich donations. He resolutely campaigned against the still widespread marriage of priests and for the enforcement of celibacy .

As far as the imperial organization is concerned, it was only Heinrich I who actually implemented the improvement that had begun under Wilhelm the Conqueror. The Exchequer (Treasury), one for England and one for Normandy, became the hub of the imperial administration. The sheriffs referred to the English Exchequer , who collected the royal taxes in each county and increasingly also performed administrative tasks. The royal jurisprudence expanded beyond the original field of serious crime to include lawsuits involving property. In addition, the royal administration also relied on the church structure with bishops and abbots as important fiefs. Written edicts from the king, so-called writs , also played an increasingly important role. The pipe rolls , invoice lists of the Exchequer , are one of the most important documents in English historiography today. The oldest examples date from the time of Henry I.

With Matilda, who took over regent duties while the king was absent and did a lot for the expansion of London (" good queen Maud "), Henry I had two children before she died in 1118: Matilda , born 1102, and William Ætheling , born 1103 - both were to remain Heinrich's only legitimate children. On January 29, 1121 he married Adelheid von Löwen , the daughter of Gottfried I , Count von Löwen, but no children were born from this marriage. However, Heinrich had numerous illegitimate children - more than twenty are known - who were born between 1100 and 1120 (see below). Most of the illegitimate sons later took over important principalities; the daughters were married politically.

On November 25, 1120, two of his sons died in the wreck of the White Ship on the Normandy coast. One of the two, Richard , was out of wedlock and is only mentioned sporadically in the traditions, so that the assumption has been made that he never existed. With the death of the other, William Ætheling, born from his marriage to Matilda and Henry's only legitimate son, the kingdom fell into a crisis.

Since he had no male heir, Henry I unusually obliged his barons to recognize his daughter Princess Matilda as heiress. She was the widow of Emperor Henry V of the Holy Roman Empire.

Henry I died of food poisoning from lazy lampreys in December 1135 at St. Denis le Fermont in Normandy and was buried in Reading Abbey in Reading . In March 2015 it was announced that after the successful search for the remains of King Richard III. It is planned to search for the remains of Heinrich on the site of the monastery, which was largely destroyed in the 16th century.

Although Henry I's Barons had sworn loyalty to his daughter Matilda as her queen, the Matilda family and her remarriage to the Anjous family , enemies of the Normans, gave Henry I's nephew Stephen of Blois the opportunity to come to England and the Claim the throne as Stephan I. with the support of the people.

The battle between Matilda and Stephan culminated in a long civil war that caused anomalous conditions. The dispute was finally ended after Stephan chose Matilda's son Heinrich as his heir in 1153 .

The most important contemporary historian about the life and work of Henry I is Ordericus Vitalis . The king is mentioned frequently in his church history.

The known illegitimate children of Heinrich are:

For the offspring of illegitimate children, see Rollonids

Heinrich I is mentioned in several novels, among others: