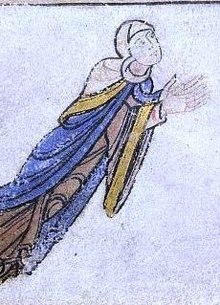 Adelheid von Löwen was the eldest daughter of Gottfried I the Bearded , Duke of Lower Lorraine , Count of Leuven and Landgrave of Brabant , and his first wife Ida of Namur, born in Leuven. She thus descended from Charlemagne on her father's and mother's side . Her father was an ally of Emperor Heinrich V. Adelheid's year of birth is not recorded, but is estimated to be around 1103, since the sources refer to her as puella (girl) at the time of her marriage to King Henry I of England in 1121 and after 1135 gave birth to seven more children. Her siblings included u. a. Gottfried II , who succeeded his father in 1139 as Count of Leuven and Landgrave of Brabant. According to the consistent testimony of the chroniclers, u. a. von Heinrich von Huntingdon , Adelheid, about whose early training nothing is known, was an extraordinarily beautiful woman. She sang the troubadours as The Fair Maid of Brabant .

Marriage to Henry I of England

There were plans for Adelsheid's marriage to the widowed King Heinrich I before the death of Heinrich's only legitimate son William Ætheling on November 25, 1120 when the White Ship sank . In any case, Heinrich's now need to produce a new male heir accelerated this marriage project. According to the English historian and theologian Eadmer , Heinrich's advisors were convinced that Adelheid would prove to be worthy of the role of an English queen intended for her not only because of her attractiveness, but also because of her morality and character. Heinrich's only surviving daughter from his first marriage, Matilda , may have been involved in the initiation of his second marriage, as she was in close contact with her father at the time. The marriage of the approximately 52-year-old King Henry I with the approximately 18-year-old Adelheid took place on January 24, 1121 in Windsor Castle .

The young queen apparently often accompanied her husband on his travels - for example in 1125, 1129 and probably also in 1131 to Normandy - to increase the chances of conceiving a child. Despite this circumstance and the fertility of both spouses, the marriage, which lasted almost 15 years, remained childless. Hildebert von Lavardin , Bishop of Le Mans, consoled Adelheid about this in a letter.

In contrast to Edith of Scotland , the first wife of Henry I, Adelheid appeared very rarely politically. She only authenticated a few of her husband's documents, played no role in the king's advisory body and never acted as regent. As a morning gift she received extensive goods administered by her, including a. the county of Shropshire and Queenhithe in London . She also had her own household, some of her staff from Lorraine having come with her. Her first two chancellors rose to the rank of high prelate: Godfrey became Bishop of Bath in 1123 and Simon Bishop of Worcester in 1125. Her brother Joscelin von Löwen gave her a large estate, Petworth , in Sussex , which was dependent on the Arundel Castle that belonged to her .

Adelheid was culturally educated, showed a particular fondness for literature and stood out at the English court as the patroness of French poetry. She sponsored the Anglo-Norman poet Philippe de Thaon , who dedicated his bestiaire ( bestiary ) to her, translated from Latin . Geoffroy Gaimar suggests that she commissioned the poet David to write a now lost biography of Heinrich's life in poetry.

When her husband died on December 1, 1135, Adelheid first spent a time in the Benedictine monastery Wilton Abbey near Salisbury. She was also present when Henry was buried in Reading Abbey on the first anniversary of his death . Around the same time she founded a hospital for lepers, dedicated to St. Aegidius , at Fugglestone St Peter in Wiltshire .

Around 1138 Adelheid married William d'Aubigny , who had belonged to King Henry I's court. They lived together at Arundel Castle, on the Sussex coast, owned by the Queen Dowager. King Stephen made Adelheid's second husband Earl of Lincoln around 1139 and Earl of Arundel around Christmas 1141 . Adelheid and William had seven children reaching adulthood: Reynor, Henry, Geoffrey, Olivia, Agatha, Alice and William , who later became the 2nd Earl of Arundel.

Not much is known about Adelheid's relationship with her stepdaughter Matilda, but she certainly took part in the ceremony during which Henry I officially named Matilda his alleged heir to the throne, as the chronicler John of Worcester states that the queen is the king's daughter I swore the oath of allegiance. When Matilda landed in Sussex on September 30, 1139 to assert her claim to the English throne in the power struggle against King Stephen, she was initially accepted by Adelheid and William d'Aubigny in Arundel Castle. However, Adelheid's second husband was a staunch supporter of King Stephen. According to the contemporary historian Wilhelm von Malmesbury , who was close to the House of Anjou, Adelheid had supposedly had her stepdaughter promised a safe stay through messengers sent to Normandy; but then, when King Stephen besieged Arundel Castle, she delivered Matilda to the latter. John of Worcester excuses Adelheid's actions with her fear of the king and the possible loss of her large estates in England. He also mentions Adelheid's justification to King Stephen, to whom she had sworn that his enemies would not have come to England on her advice, but that she had only given them hospitality as high-ranking personalities who were once close to her. Adelheid succeeded in getting King Stephan to escort Matilda in a knightly manner to her half-brother Robert, 1st Earl of Gloucester in Bristol . During the further armed conflicts between King Stephan and Matilda, Adelheid and William d'Aubigny always stood loyally at the side of the former.

Adelheid founded a. a. the small priory of Pynham in Sussex and during their second marriage also donated large sums to the church, particularly to Reading Abbey, where their first husband was buried. She left this monastery a. a. from 1136 an annual sum of 100 shillings from their income from Queenhithe. More donations she made the municipalities situated in Sussex Boxgrove Priory and the Cathedral of Chichester , who the benefice West Dean through suitable 1150th

In 1150 Adelheid left her second husband and spent the last year of her life in the Affligem Abbey in Flanders . Her brother Heinrich had also lived in this monastery, where she died in 1151 at the age of about 48. The location of her burial site is uncertain. According to the annals of Margam, she was buried in Affligem Abbey, but according to a deed of donation from her brother Joscelin in Reading Abbey.