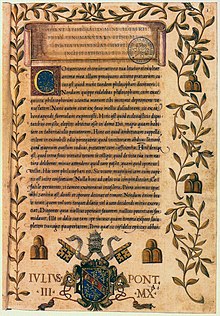 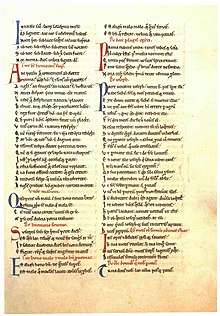 Hildebert von Lavardin (also Hildebert von Tours , Hydalbert , Gildebert or Aldebert ; * 1056 in Lavardin near Vendôme , Montoire-sur-le-Loir ; † about December 18, 1133 ) was a French writer and Archbishop of Tours . He is one of the most important authors of the Latin Middle Ages.

Born to not very wealthy parents who had chosen him for the clergy at an early age, he was probably a student of Berengar von Tours . In 1091 he became archdeacon and in 1096 bishop of Le Mans . He not only had to fight against the resistance of parts of his priesthood, but also the English King William II , his overlord since the capture of Le Mans, spent the bishop against his will in England for a year. Following this he traveled to Rome in December 1100 with the request to be released from his obligations as bishop. Pope Paschal II refused, however, and confirmed him as bishop. Hildebert had managed to collect rich funds in Sicily and Apulia for the construction of a cathedral in Le Mans. During the construction of the cathedral he was even repeatedly drawn into the Franco-English conflict.

In 1116 his diocese got into great unrest due to the sermons of the heretical itinerant preacher Heinrich von Lausanne , who violently attacked the higher clergy and especially the bishop. Hildebert ordered him to leave the Le Mans area, but the effects of his heretical sermons continued. In 1125 Hildebert was installed as Archbishop of Tours against his fierce resistance.

His unfinished work De querimonia on the relationship between body and soul is the first philosophical prosimetrum of the 12th century.