The keep of Castle Rising Castle, built by Aubigny

William d'Aubigny came from the Anglo-Norman family Aubigny . He was a son of William d'Aubigny Pincerna, Lord of Buckenham and Maud le Bigod, a daughter of Roger Bigod . His father owned extensive estates in Norfolk, the center of which was Buckenham Castle , which he inherited in 1139 after his father's death.

Marriage to the king's widow and role in the civil war

The young Aubigny belonged to the court of King Henry I of England. After Heinrich's death in 1135, he married his widow, Adelheid von Löwen, probably in 1138, or by September 1139 at the latest . By his wife's right, he became Lord of the Honor of Arundel with Arundel Castle .

The former Empress Matilda , the daughter of Henry I, landed in Arundel on September 30, 1139 to assert her claim to the English throne, which started the civil war over Heinrich's successor . Aubigny remained a loyal follower of King Stephen , who only made him Earl of Lincoln in 1139 and Earl of Arundel at Christmas 1141 . At times he is also referred to as the Earl of Chichester and Earl of Sussex . During the Civil War, he did not stand out until he was instrumental in negotiating the Wallingford Treaty between King Stephen and Henry Plantagenet in August 1153 , which ended the Civil War. He is named as the first witness in the contract.

When Heinrich Plantagenet ascended the throne as Henry II in 1154 , he confirmed William's title and, since Adelheid had died in 1151, gave him the ownership of Arundel Castle . Aubigny was also a loyal follower to Heinrich II. In September 1158 he successfully claimed the hereditary office of cupbearer before Henry II and Louis VII in Paris , and then went on a three-year pilgrimage to Jerusalem. After Thomas Becket's flight to France in 1164, Aubigny belonged to an embassy of Henry that belonged to Pope Alexander III. traveled to assure him of the king's willingness to reconcile. In 1167 he accompanied Mathilde , the king's daughter, to her wedding with Heinrich the Lion in Germany. He played an important role in the suppression of the revolt of Heinrich's son Heinrich the Younger . He took part in the siege of Breteuil Castle in Normandy in August 1173 , where Robert de Beaumont, 3rd Earl of Leicester was entrenched, and in October 1173 in the Battle of Fornham , where the royal barons won an important victory over the rebels won. 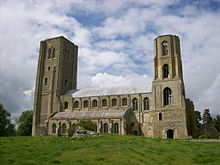 The church of Wymondham Abbey, donated by Aubigny

Aubigny was known for his wisdom and eloquence, so he is said to have given an admonishing and cheering speech to the troops at the siege of Breteuil. At the same time, his marriage to the king's widow is said to have made him intolerable. He built Castle Rising Castle with the magnificent rectangular keep , perhaps to celebrate his wedding . Later he also had New Buckenham Castle built, the keep of which, however, only the foundation walls have been preserved, is considered the oldest known round keep in England. Around 1146 he founded the Augustinian Priory of Old Buckenham . He was buried in Wymondham Priory , his father's foundation.

From his marriage to Adelheid he had several children, including:

His son William became his heir.