from Wikipedia, the free encyclopedia
Battle of Tinchebray 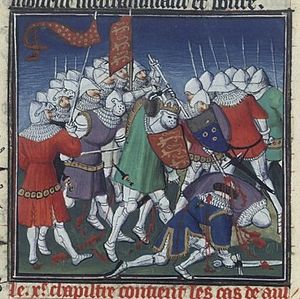 The Battle of Tinchebray was a military clash in medieval France that decided a power struggle over Normandy between the brothers Robert Kurzhose and Heinrich Beauclerc , both sons of William the Conqueror . It took place on September 28, 1106 in front of the castle of Tinchebray in what is now the Orne / Normandy department .

When William the Conqueror died in 1087, his empire should be divided between his two eldest sons. The Norman ancestral land, which formally belonged to the feudal structure of France , was to go to his eldest son Robert Kurzhose , while the English kingdom, conquered in 1066, was to be taken over by the second-born William II Rufus . The third son Heinrich Beauclerc , on the other hand, did not receive any land, but only a settlement of 5000 pounds of silver .

After Wilhelm Rufus died in 1100 as a result of a hunting accident in the New Forest , Heinrich Beauclerc took the opportunity to seize the English throne. The absence of Robert's shorts on the First Crusade had favored this swift takeover. However, Robert Kurzhose returned from the crusade to Normandy in the autumn of the same year and immediately laid claim to the English throne. His attempt to invade Portsmouth in 1101 failed because of Henry's military strength. Both brothers therefore settled their differences in the Treaty of Alton , in which Robert recognized Henry's English kingship and was to receive monetary payments as compensation for his renunciation of the throne.

However, the contractual agreement was quickly broken by Heinrich Beauclerc, who persecuted Robert's followers in the following years and repeatedly acted like an overlord towards Normandy, although the King of France was the actual overlord of Normandy. In 1104 Heinrich finally undertook a direct attack on Normandy and brought the west of the country under his control. The fratricidal war was de facto broken out.

In June 1106 Heinrich Beauclerc landed a second time on the coast of Normandy and entered the Abbey of Le Bec without hindrance , where he celebrated the feast of the Assumption on August 15th . He then took up extensive alliance negotiations with Count Elias I of Maine and Duke Alain IV Fergant of Brittany . Then he sent a contingent of troops against his hostile cousin, Count Wilhelm von Mortain , who holed up in his castle at Tinchebray. After the count was able to successfully defend himself there, Heinrich decided personally, together with his allies, to devote himself to the battle for Tinchebray.

Meanwhile, Robert Kurzhose had also made preparations to defend his duchy against his brother. Following the request for help from the Count of Mortain, who was his vassal, he formed an army with the powerful Baron Robert von Bellême to relieve Tinchebray. On the part of King Philip I of France as well as Crown Prince Ludwig VI. no support was to be expected, as these were bound in a revolt of the barons of the Île-de-France .

When Robert Kurzhose reached the besieged Tinchebray with his army on September 28, 1106, he first made diplomatic contact with his brother. He pointed out that the Count of Mortain was a vassal of the Duke of Normandy and that any punitive measure against him could only be imposed by the Duke. In fact, however, Heinrich Beauclerc had committed a violation of the law because, as King of England, he had no rulers over a vassal of Normandy. His actions against the Count of Mortain therefore represent an act of war against the Duke of Normandy, which is also unlawful, since Heinrich had not made a formal declaration of war on Robert. Heinrich rejected the request to end the siege and to withdraw and instead let his army prepare for battle.

Heinrich's army consisted mainly of infantry, which he formed into three ranks. Ranulf de Bayeux took command of the first row, Robert de Beaumont the second and William de Warenne the third . Heinrich himself and his immediate entourage dismounted from their horses to fight on foot, which was unusual for Norman tactics . He only had a smaller contingent of knights under the command of Count Elias of Maine positioned a little off the field. On the other side, Robert's army outnumbered Robert in cavalry. The Duke formed his troops into two lines of attack, with the Count of Mortain leading the first and the Lord von Bellême taking over the second.

The first attack led Robert Kurzhose with the division of the Count of Mortain and he managed the breakthrough through the series of Ranulf de Bayeux, but already at the series of Robert de Beaumont he got caught in hand-to-hand combat against the enemy fighting on foot. After less than an hour, Heinrich Beauclerc decided the battle in his favor when his reserve armies under the Count of Maine broke into Duke Roberts' unprotected flank and killed 225 opponents in the process. The Baron von Bellême, who had not yet intervened in the battle, immediately fled and abandoned his allies on the battlefield. Robert Kurzhose and most of his entourage, including the Anglo-Saxon pretender Edgar Ætheling , were captured by Heinrich Beauclerc.

In a letter to Archbishop Anselm of Canterbury , Heinrich Beauclerc reported the capture of 400 knights and 10,000 infantrymen. A few days after the battle, he released most of the prisoners. Only his brother Robert Kurzhose was to remain in captivity for the last twenty-eight years of his life. With the victory of Tinchebray, Heinrich Beauclerc reunited the "Anglo-Norman Empire" created by his father under one rule. In October 1106 he convened a council of Norman barons in Lisieux and declared himself the new ruler of Normandy. Throughout his life, however, he refrained from officially accepting the title of duke, with which he intended, above all, to avoid the associated vassal duty to the King of France.

Opposite King Ludwig VI. France and fled to him Wilhelm Clito , son and heir of Robert shorts, defended Henry's reign in Normandy by the victorious battle of bremule in 1119. The Anglo-Norman composite should by King until 1204 Philipp II. August are terminated .