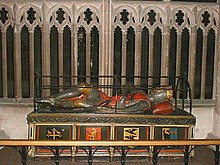 Robert II , called Robert Kurzhose ( English Robert Curthose , French Robert Courteheuse ; * 1054 , † February 1134 in Cardiff , Wales ), was Duke of Normandy . He was the eldest son of William I the Conqueror and the older brother of Wilhelm Rufus and Heinrich , both kings of England.

From 1087 to 1106 he was Duke of the Normans . He mortgaged his duchy to the Crown of England to take part in the First Crusade , on which he led a large army of Normans, English and Bretons .

He was the eldest son of William I the Conqueror, the first Norman king of England and Matilda of Flanders . His reign as duke was pervaded by the constant quarrel with his brothers in England. This eventually led to the Duchy of Normandy becoming the property of England.

Normally his birth is dated to the year 1054, other sources speak of 1051. As a child he was engaged to Margaret, the heiress of the French county Maine , but she died in 1063 before they could marry. After that, Robert did not marry until he was almost 50 years old. It is reported that he was brave and adept at handling weapons in his youth. However, it is said that he was lazy and weak in character, so that the French king and some nobles took advantage of this to stir up discord with his father Wilhelm. Robert was dissatisfied with the division of power and constantly argued about it with his father and brothers.

In 1077 he instigated the first rebellion against his father as a result of a prank played by his younger brothers Wilhelm Rufus and Heinrich when they poured stinking water on him. Robert was furious and, instigated by his friends, began a fight with his brothers that eventually had to be ended by their father. Robert felt his dignity had been violated, especially when his brothers were not punished by King Wilhelm for the prank. So Robert tried to occupy the castle of Rouen with his followers the next day . The plan failed, and King Wilhelm ordered those involved to be locked up. Robert and his entourage then fled to Hugh of Chateauneuf-en-Thymerais in Rémalard. There, too, they had to flee when King Wilhelm attacked.

Robert then fled to his uncle's court in Flanders and then plundered County Vexin . He caused such chaos that his father allied with the French King Philip I to stop his rebellious son. The dispute escalated further when King William noticed that Robert was receiving financial support from his mother, Queen Matilda. During the siege of Gerberoy in January 1079, William was torn from his horse by his son and wounded. It was only when Robert heard his father's voice that he stopped his attack. Humiliated, King William cursed his son, but had to end the siege and return to Rouen . For Easter 1080 Queen Matilda reconciled father and son; an armistice was signed, but it only lasted until 1083.

Robert had left the royal court shortly after his mother's death and traveled for several years across France, Germany and Flanders. He also visited Italy and asked for Mathilde von Tuszien's hand there , but was turned away. During this time as a traveling knight, Robert fathered several illegitimate children. One of these children, his son Richard, later spent much of his life in the royal court of his uncle Wilhelm Rufus. Just like his uncle, Richard was killed in a hunting accident in the New Forest in 1099. An illegitimate daughter later married Helias von Saint-Saens.

Robert's father died in 1087 as a result of a riding accident that he suffered during the siege of Mantes . Shortly before his death, he wanted to disinherit his eldest son, but was convinced by his advisors to divide the Norman dominions between the two eldest brothers. This gave Robert the Duchy of Normandy and Wilhelm Rufus the Kingdom of England. The youngest son Heinrich got money to buy land.

Those nobles who had lands on either side of the English Channel tried to influence Robert mainly because they believed him to be the one they could more easily influence. When their father died, the two brothers had agreed that they would make each other heirs. This peaceful coexistence of the brothers ended as early as 1088, when some English barons tried together with Robert in the rebellion of 1088 to depose Wilhelm Rufus. The rebellion failed, not least because Robert never appeared in England to support the local barons.

Robert made Ranulf Flambard his personal advisor, who had already been a close advisor to his father. Later, until the king's death in 1100, Flambard also became a shrewd financial advisor to Wilhelm Rufus. 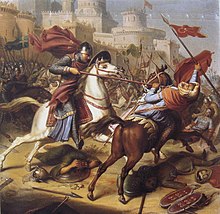 Robert Curthose during the siege of Antioch (1097-1098). Historicizing painting from 1850 by JJ Dassy

In 1096 Robert took part in the First Crusade to the Holy Land. It is reported that at the time of his departure he was said to have been so poor that he sometimes stayed in bed during the day because he had nothing to wear. To get money for the crusade, he pledged his county to his brother Wilhelm for the sum of 10,000 marks. Robert and Wilhelm agreed again that they should be mutually heirs to England and Normandy. Therefore Robert should have ascended the English throne when his brother died on August 2, 1100. At the time he was returning from the crusade and had married a wealthy bride in order to receive money to redeem his duchy. Meanwhile, his younger brother Heinrich took the throne.

After his return, at the urging of Flambard and several Anglo-Norman barons, he crossed to England to recapture the crown from his brother Heinrich. In 1101 Robert and his army landed at Portsmouth . Due to a lack of support from the English population and Robert's tactical mistakes, Heinrich was able to repel the invasion. In the Alton Peace Treaty , it was negotiated that Robert renounced the throne. Even during the crusade it was reported about Robert that although he could fight excellently on the battlefield, he failed as a general. His mismanagement in Normandy also proves that he had better skills with the weapon than in politics.

In 1105 the ongoing dispute with his brother Heinrich and unrest in Normandy led Heinrich to invade Normandy.

The chronicler Ordericus Vitalis reports an incident at Easter 1105 when Robert wanted to go to a sermon by Bishop Serlon d'Orgères of Sées . Robert had spent the night before with whores and court jesters and was drunk in his bed when his friends stole his clothes. He woke up naked and missed the sermon.

A year later Heinrich defeated his brother decisively in the battle of Tinchebray and claimed Normandy as English possession, which it would then remain for about a century. Robert was captured after the battle and imprisoned in Devizes Castle for 20 years . He was then taken to Cardiff .

Robert died in captivity at Cardiff Castle in 1134 . He was buried in the Abbey Church of St. Peter in Gloucester , later Gloucester Cathedral . An elaborately designed tomb was later erected there.

On the way back from the First Crusade Robert married Sybilla , the daughter of Gottfried von Brindisi, the Count of Conversano , a great niece of Robert Guiskard , the Norman Duke of Apulia. Her son Wilhelm Clito was born on October 25, 1102 and became heir to the Duchy of Normandy. Sybilla, who was written about with great admiration by contemporary chroniclers, died shortly after birth. There are various theories about her death. On the one hand, it is reported by William of Malmesbury that her breasts were laced too tight, while Robert von Torigny and Ordericus Vitalis suspect that she was murdered by an intrigue between noble women and Robert Curthose's lover, Agnes Giffard.

Wilhelm Clito's life was also unhappy. His attempts to conquer Normandy failed twice - in 1119 and 1125. His first marriage to the daughter of the Count of Anjou was annulled by the machinations of his uncle and when he later inherited the county of Flanders, he ran it down. Wilhelm Clito died impoverished in 1128. As a result, there were no more discussions in the Norman succession to the throne, at least until the death of Henry I.