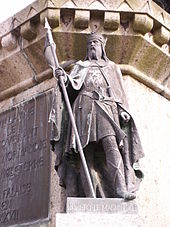 Statue in the Falaise market square

After the death of his brother Richard III. , who ruled from 1026 to 1027 as the 3rd Duke of Normandy, succeeded him in 1027 as the 4th Duke Robert. He stood by the French King Henry I when he defended his throne against his brother and mother . For this Robert received the area of ​​the Vexin .

He also got involved in Flanders politics, founded monasteries and supported King Edward of England , to whom he later even granted temporary asylum.

In 1035 he made a pilgrimage to Jerusalem . He died on the way in Nicaea.

Robert was married to Princess Estrid of Denmark . The marriage remained childless.

The following children emerged from the Friedelehe with the tanner's daughter Herleva :

Herleva and her family gained reputation and wealth through their association with Robert. Shortly after the birth of the second child, she was married to Robert's friend and feudal husband, Count Herluin von Conteville , in 1031 .

After Robert's death in 1035, his son took over the succession to the throne as Wilhelm II and with it the reign of Normandy. William was to end Anglo-Saxon rule in England in 1066 and become the island's first Norman king.

To get rid of the curse that he was consecrated to the devil before he was born , a holy hermit suggested that Robert take a vow of silence and accept his food from a dog. In the course of his life Robert acquired the nicknames Robert the Magnificent and Robert the Devil .

Some motifs from the legend included in the 1831 opera premiered le diable Robert of Giacomo Meyerbeer one.