Meyerbeer is a redirect to this article. Further meanings are listed under Meyerbeer (disambiguation) . 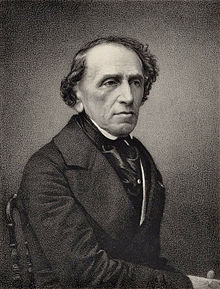 Giacomo Meyerbeer (born September 5, 1791 in Tasdorf , Mark Brandenburg , † May 2, 1864 in Paris ), born Jakob Liebmann Meyer Beer , was a German pianist , composer and conductor . He was one of the most successful opera composers of the 19th century and is considered a master of the French grand opéra . 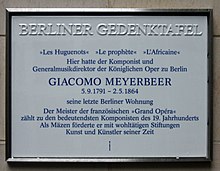 Berlin memorial plaque on the house at Pariser Platz  6a, in Berlin-Mitte

Commemorative plaque on the site of the home of Wolfgang Carl Briegel , Georg Joseph Vogler and Giacomo Meyerbeer in Darmstadt, Karolinenplatz

Jakob Meyer Beer was born as the son of the Jewish sugar producer and banker Jacob Herz Beer (1769–1825) and Amalie ("Malka") Beer , a daughter of Liepmann Meyer Wulff , in a touring car that his mother took from Berlin to Frankfurt (Oder ) was on the way, born in Tasdorf. The birth house stood until January 2013 and was then demolished (it was inhabited until around 1990). The memorial plaque that was on this house is now in the home parlor of the Rüdersdorf community .

His brothers were Wilhelm Beer (a businessman who became known as an amateur astronomer ) and Michael Beer (who became known as a writer). The third brother Heinrich Beer (1794–1842) never practiced a profession. Jakob was trained as a pianist at an early stage under the direction of Franz Seraphinus Lauska (1764–1825), at times also from Muzio Clementi , and appeared as such at the age of nine. His later composition studies were conducted by the conductor BA Weber , Carl Friedrich Zelter and, from 1810, the Abbé Vogler in Darmstadt, where Carl Maria von Weber was his classmate. At that time he composed various kinds of church music as well as a cantata : God and Nature . From 1810 he merged the names Meyer and Beer into one word and called himself Meyerbeer . In the same year he joined the Society of Friends . While studying with Zelter in Berlin, he was also a member of the Sing-Akademie . 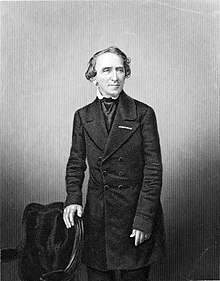 Moving on to dramatic composition, he wrote the opera Jephthas Vow , which was performed in Munich. At the beginning of 1813 he went to Vienna and spent ten months studying music with Antonio Salieri . His second opera Wirt und Gast was performed in Stuttgart (conductor: Conradin Kreutzer ) and in Vienna with Cathinka Buchwieser (arranged as: The two caliphs ). In 1814 Meyerbeer composed a Singspiel Das Brandenburger Tor for Berlin and went to Paris. At the end of 1815 he moved to Italy on Salieri's advice, where he wrote a series of operas for the local stage in the new operatic style established by Gioachino Rossini . In Germany were known Emma di Resburgo , Margherita d'Anjou and Il crociato in Egitto ( The Crusader in Egypt ). The rest were: Romilda e Costanza , Semiramide riconosciuta , L'esule di Granada and Almansor . 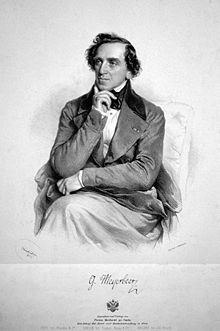 Returning to Paris in 1824, he allied himself with the playwright Eugène Scribe , with whom he became the main representative of the French grand opera of the 19th century. The opera Robert le Diable ( Robert the Devil ) owes its creation to this connection, which was premiered in 1831. In 1834 Meyerbeer was accepted as a foreign member of the Académie des Beaux-Arts .

His next major work was the opera Les Huguenots ( The Huguenots ), also composed by Scribe and completed in early 1835 but not performed until February 29, 1836 . However, with regard to discussions of the connection between religion and violence, some extensive changes to the text were made in later performances in Roman Catholic regions. Charlotte Birch-Pfeiffer moved the action to London with the replacement of Catholics and Huguenots by Anglicans and Puritans , so that the opera entitled The Anglicans and Puritans was first performed in Munich in 1838. In Vienna the opera with the title Die Welfen und Ghibellinen and in Kassel and Prague with the title Die Ghibellinen in Pisa came on stage.

In 1842 Meyerbeer was appointed General Music Director of the Berlin Opera by the King of Prussia as successor to Gaspare Spontini , with the obligation to conduct four months a year; but in reality the position was almost like an honorary post. Meyerbeer waived the associated salary of 4,000 thalers in favor of the chapel. Meyerbeer received the order Pour le Mérite .

In terms of compositions, u. a. the opera Ein Feldlager in Schlesien , written for the inauguration of the Berlin Opera House and first performed in 1844; also the music for the tragedy Struensee by his late brother Michael Beer , as well as his third major opera Le prophète , which premiered in Paris in 1849 and made the rounds on the larger German theaters from 1850 onwards.

Meyerbeer's last work, who from then on lived alternately in Berlin and Paris, was the reworking of his camp into the comic opera L'étoile du nord (1854) and a second comic opera, Dinorah ou Le pardon de Ploërmel (1859) Premiered); also occasional pieces, for which Friedrich Schiller's 100th birthday ( Schillermarsch , 1859), the coronation of Wilhelm I as King of Prussia ( torch dances , 1861) and the world exhibition London 1862 ( festival overture ) offered occasions.

While he was preparing the performance of his fourth great opera L'Africaine ( Die Afrikanerin ), which had begun 20 years earlier but was not completed until 1863/64, in Paris , he suddenly died on May 2, 1864. According to his will, the corpse was to be buried at the Jewish cemetery on Schönhauser Allee brought to Berlin; in Paris, however, a funeral service was held. A year later, the last-named opera was performed in an edited and abridged version under the direction of François-Joseph Fétis in Paris.

Meyerbeer was a member of the Masonic Lodge Les Frères Unis Inséparables in Paris. 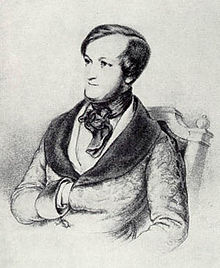 Richard Wagner at the time of his first meeting with Meyerbeer; Portrait of Ernst Benedikt Kietz , around 1840

Richard Wagner was initially a submissive admirer of Meyerbeer, but later portrayed him in an anti-Semitic way in his writings Opera and Drama and Das Judenthum in der Musik .

When Wagner lived in poor economic conditions in Paris from 1840 to 1842, he received financial help from Meyerbeer several times, “but Meyerbeer did not thank him, he developed envy for competition. Wagner tried to surpass Meyerbeer, which he succeeded in doing. The fact that Meyerbeer was a Jew contributed to an anti-Semitic syndrome at Wagner. ”In a review by Der Prophet Wagner celebrates the composer as“ the prophet of the new world ”and writes:“ If the genius comes and throws us into other paths, it follows Enthusiastic about everything, even if he feels unable to achieve something in this way. ” In a famous bon mot, Hans von Bülow described Wagner's Rienzi as“ Meyerbeer's best opera ”. Wagner later wrote to his father-in-law Franz Liszt about his encounters with Meyerbeer in Paris : “I don't hate him, but I hate him beyond measure. This eternally amiable, agreeable person reminds me of the most unclear, I would almost like to say the most vicious period of my life, as he still appeared to be patronizing me. "

In opera and drama Wagner writes: "The secret of Meyerbeer's opera music is - the effect " and describes this term as "effect without cause".

In the anti-Semitic text Das Judenthum in der Musik , Meyerbeer appears, without being directly mentioned by name, as “a far and wide famous Jewish composer” who embodies all the negative qualities that Wagner attributes to Jewish artists and those in the introduction as “Hebrew artistic taste “Can be summarized. The basic anti-Semitic tone of Wagner's writing was effective until the Nazi era and served Karl Blessinger as the basis for his pamphlet: Mendelssohn, Meyerbeer, Mahler. Judaism in Music as the Key to 19th Century Music History , published in 1938 and expanded in 1944.

Meyerbeer's grave, to the right of his mother's grave

Meyerbeer left a princely fortune, which he used, as he did in his will in his lifetime, to generously support poor artists. In his will, Meyerbeer left a legacy of 10,000 Reichstalers (Meyerbeer Foundation), the interest of which was awarded every two years to young German composers for the purpose of studying for six months in Italy, Paris, Vienna, Munich and Dresden . Only students from the Royal University of Music (Composition Department), the Stern Conservatory , the Kullak Academy in Berlin and the Cologne Conservatory were eligible to apply for the scholarship . The application was made through the composition of an eight-part double-choir vocal fugue, an overture for large orchestra and a three-part dramatic cantata with orchestra.

Most of Giacomo Meyerbeer's written legacy is in the music department of the Berlin State Library . Until 1987 some things were still in the State Institute for Music Research . Most of what was already in the possession of the State Library until then did not return from relocation due to the war. Almost thirty volumes of it are currently stored in the Biblioteka Jagiellonska in Kraków , the rest are considered lost or lost. The Bibliothèque nationale de France also holds a number of autographs.

Wolfgang Bernhardi wrote a parody entitled Die Afrikanerin in Meseritz. Great fantastic opera by Scribefax with music by Beyermeer and connecting text . The play was performed in Berlin in 1866 with great success, but it can no longer be found in any library.

The Viennese theater writer and actor Johann Nestroy wrote a parody of Robert le diable in 1833 under the title Robert der Teuxel , which was played with great success for several years.