Robert le diable (German: Robert the Devil ) is an opera in five acts. The music was composed by Giacomo Meyerbeer . It was his first contribution to the grand opéra genre . The libretto was written by Eugène Scribe and Germain Delavigne . The first performance took place on November 21, 1831 at the Paris Opera . It established the composer's fame in France and in large parts of Europe.

The plot is based on a fabulous character who is often equated with Robert , the father of Wilhelm the Conqueror . On the Seine below Rouen , Robert Le Diable Castle has been preserved as a ruin.

The Duchess of Normandy once got involved with the devil personally. As a result of this liaison she had her son Robert. Because he inherited numerous evil traits from his father, he is expelled from the country and now looks for happiness in Sicily. Here he meets Isabelle, the daughter of the Sicilian king. For him it's love at first sight. His unknown father tracks him down there and wants to harness him for his dark machinations. But he has to realize that his influence does not go that far. In order to win his favor, he ingratiates himself with him. He now calls himself Bertram and pretends to be a fatherly friend. At first, his plan seems to be working. Wherever Robert goes and whatever he does, Bertram doesn't let him out of sight.

In the past, Robert was always lucky, but now he has to discover that he has recently been haunted by bad luck. For example, when he plays cards with soldiers, he not only loses his weapons, but also all of his savings. Hope germinates when he feels that the princess he so admires is dear to him. She gives him a new sword and wants him to participate in the tournament that is being prepared. The winner of the tournament should have her as his wife.

When Robert comes to the tournament site, the competition has already started and latecomers are not allowed. He has to watch contrite as Isabelle is led away by another. It is the Prince of Granada, a confidante of Bertram.

Once again, Bertram poses as Robert's fatherly friend. He leads his protégé to the cemetery of a dilapidated monastery and advises him to break a branch from the tree on the grave of St. Rosalie. Then the miraculous power unfolds, and Isabelle return to him. Suddenly all the graves open. The dead nuns get out, begin to dance, and transform into desirable young girls. When Robert takes the twig, the beautiful girls turn into ugly old women with terrible grimaces. The nun ballet ends with all previous nuns dissolving into nothingness.

Bertram knows that he has little time left to win Robert over to hell. If he doesn't succeed by midnight, Robert will be lost to him forever. The two enter a church together. Now Bertram reveals to Robert that he is really his father. But the attempt to get Robert to swear an oath on his father is doomed to failure. The bells of the church tower strike at midnight. The floor opens and Bertram goes back to hell alone.

At the end of the opera, Isabelle and Robert become a couple.

After the critical edition by Wolfgang Kühnhold and Peter Kaiser, the following orchestral line-up is planned for the opera: 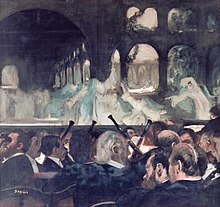 The choreographer Filippo Taglioni created his famous nun ballet for this opera with his daughter Marie Taglioni as a soloist. It is considered to be the first ballet that was danced to the extreme. The top dance was still an acrobatic attraction and was only performed by the soloist, not yet by the corps de ballet . The costumes and the theater lighting in the Paris Opera with the recently gas-powered spotlight made the ballet number a sensation and a pioneer of classical ballet, which had been separated from the opera .

In the first four years after the premiere, Robert le diable was produced at 77 theaters in ten countries; by 1893 the opera was performed 754 times at the Paris Opera. This makes Robert le diable one of the most successful operas of the 19th century.

The first parodies were performed on the Parisian stages as early as the year of the premiere in 1831. In the years that followed, a broad repertoire of such vaudevilles and other genres developed, which took up musical and literary elements of opera. The Viennese theater writer and actor Johann Nestroy wrote a parody in 1833 with the title Robert the Teuxel .