The title of this article is ambiguous. Further meanings are listed under triangle (disambiguation) .

The (also the or that) triangle (probably from Italian triangulo from Latin triangulum "triangle") is a percussion instrument , consisting of a round steel rod that is bent in the shape of an equilateral triangle open at one corner and is provided with a hanging device .

As the high treble of the percussion instruments, the triangle has the task of adding the highest highlights to the orchestral sound. Although complex rhythmic figures can be played on it, it is mostly only used sparsely for accentuation due to its penetrating sound.

The triangle is a high percussion instrument from the group of idiophones . As a steel rod struck directly (with a triangle mallet), it is one of the idiophones. It consists of a round steel rod that is bent into an equilateral triangle open at one corner. The three sides created in this way are called the legs of the triangle . A distinction is made between the lower (horizontal) leg and the right or left side leg . The corners in the upper angle and open angle are also designated in more detail.

The instrument is hung in the upper corner with a thin loop. The player either holds this freely in his hand (play by hand, with a mallet) or hangs it on a triangle stand (game on the stand, with two mallets).

The triangle can also be played without a loop (see picture on the right). 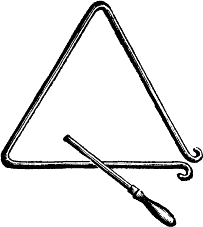 The modern triangle has the shape of an equilateral triangle . Other triangular shapes are no longer built these days. The triangle is available in different sizes, usually between 10 and 20 cm side length. Its size depends on the different areas of application. Large models are preferably used in symphony orchestras, smaller ones in early education, in play groups or in the Orff school work . The professional concert or orchestra triangles have a leg length of 14 to 30 cm, the smaller ones around 10 to 24 cm. The diameter of the steel rods is between 7 and 16 mm, depending on the size. The design of the rod ends in an open angle is done in two ways today, either they are obtuse or they taper to a point. With older models or custom-made products, the tapered ends are slightly bent outwards. The diameter of the 15 to 25 cm long triangle mallets varies from about 2 to 9 mm.

The triangle has been known in Europe since the high Middle Ages. In contrast to today's orchestral instruments, the triangular, trapezoidal or stirrup-shaped triangle was closed and often had three or more ring rings on the lower leg. Little is known about its origins and early history. Only towards the end of the 14th century can music iconographic sources be proven. The first documents come from Italy. He was often depicted as an instrument of angels making music and other biblical figures:

Depiction of an angel with a triangle in Himmelkron Monastery

Michael Praetorius depicts a triangle in his Syntagma musicum (Volume 2: Organographia ) from 1619, which is provided with rings on the lower leg and which must have had a clinking sound. He presents two triangle models : he calls the first type with the triangle shape crepitaculum, a triangle. and initially assigns it (“first part”) in its classification to the instruments “which are called percussa, knocking instruments ...”. A little further (“Ander Theil”) he of course places the triangle outside of its system and places it in the list of “dörlicher instruments” adopted by Sebastian Virdung . In the Theatrum Instrumentum 1620 on panel XXII, no. 5, the equilateral, open triangle is depicted with a mallet. The tapering rod ends are bent outwards in the shape of a hook and can thus prevent the five rings from falling out. These are lined up on the lower leg. A sixth ring in the upper corner acts as an eyelet to hold the leather loop that is used to hold the triangle. He calls the second type of triangle, with the stirrup shape, "Crotalum, vulgò a triangle". This appears with other instruments on the last panel, XLI, No. 15. Here, too, the triangle is shown with a mallet. This is thick and has a spherical knob at the end of the handle. The sound device has the shape of a stirrup: two corners below and a round arch above. It is unusually heavily equipped with 18 distortion rings. 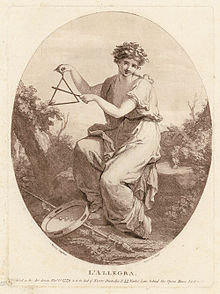 Marin Mersenne brought out his Harmonie universelle in 1636 , 17 years after the publication of the Syntagma musicum by Michael Praetorius. In the Traité des instrumens (7th book: From the percussion instruments ) he describes the triangle ( les cymbales ) in detail and also depicts it; it provides information about the material, the form, the sound and the use of the instrument. In his classification of musical instruments , he assigns the triangle to the 3rd group (le troisieme genre), that is, the percussion instruments ( la percussion ou la batterment ). The triangle described here is equilateral and closed and equipped with five ring rings. Its corners are not rounded, as one might expect, but rather pointed. The instrument can be made of silver, brass or other metals, but it is usually made of steel, as is the mallet. To hang up the triangle, two intertwined rings are used in the upper corner, one of which is attached to the triangle. You hold it in your left hand by the upper ring, it can move freely and sound better. In the right one holds the corresponding triangle mallet, which has an eyelet to hold and tapers a little towards the end. Four rings are lined up on the lower leg, one on the right leg. The sound is shrill, happy and radiant, Mersenne compares it to the sound of bells and bells. He calls the triangle cymbale and also notes that it is used by beggars to accompany the hurdy-gurdy. In addition, the rings are sometimes struck alone.

The triangle found its way into art music through the genre of Turkish opera . Here he was first used in the opera orchestra in Christoph Willibald Gluck's Iphigénie en Tauride in 1779 and in Wolfgang Amadeus Mozart's Abduction from the Seraglio in 1782, in order to create an exotic color. In the Viennese Classic, the triangle found its way into the symphony orchestra together with the bass drum and the cymbals with Joseph Haydn's Symphony No. 100 in G major (military symphony , 1794) and Ludwig van Beethoven's Symphony No. 9 in D minor , op.125 by 1824.

With the inclusion of janissary music in European military music from 1720 onwards, the triangle also became part of the rhythmic instruments of Turkish music , alongside the bass drum ( davul ), cymbals ( zil ) and bell tree ( cagana ). It was attributed to Janissary music, although the instrument does not appear in Turkish military music.

A famous solo part can be found in the third movement of Franz Liszt's Piano Concerto No. 1 in E flat major . Johannes Brahms uses the triangle in the 3rd movement of his 4th symphony and at the end of his Haydn Variations . 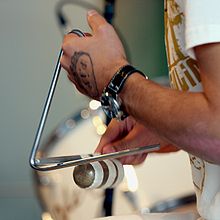 Triangle player of the Forró

In the Coptic liturgy the triangle is used together with cymbals to accompany certain hymns . It is also one of the dominant instruments in the Brazilian forró .

The triangle is also one of the Orff instruments . In addition to hanging cymbals , cymbals , finger cymbals, crotales , etc., it is part of the basic equipment of the Orff-Schulwerk. Different triangle sizes are represented here for a wide range of music educational ideas. According to their tasks, they are somewhat smaller than the more difficult concert triangles. In the range of instrument makers you can also find triangles with leg lengths between 10 and 25 cm. The material thickness varies between 7 and 12 mm. They are made from silver steel . The steel rods are blunt at their ends, which means that the otherwise pointed rod ends are straight in school triangles (see illustration). A useful relief for handling is the firm connection of the loop through a small hole of about 3 mm in the upper angle of the triangle. Triangle mallets with rubber handles are common slings.

The noun triangle in the meaning of "musical instrument" is associated with all three genera today . It is one of the few nouns in the German language that can have all three genders with them in high-level language, similar to “ jungle ” or “ ward ”. According to wiktionary , colloquial “mostly the female article is used, in technical terms the male one and in Austria the neuter article”.

Especially in dictionaries, foreign dictionaries and lexicons, the masculine word for “triangle” (as in “Zedler” in Goethe's time ) is still used today; Karger, for example, argues: “Since Italian is the international musical language in which almost all musical terms are made generally understandable, I suggest using the masculine form in German as well, analogous to the form used in Italian: il triangolo. “Also in French it is called“ le triangle ”.

The feminine is the grammatical gender (gender) of the oral language. It is especially common in the professional jargon of the drummer. Its use has probably come down to us in analogy to musical instrument names with the same suffix -el, such as: the cymbal, the drum, the bell, the rattle, the fiddle and the word component -angel (fishing rod, fishing).

The German dictionary notes: “Recently, the word tends to be feminine and often verbal in its meaning as a musical instrument.” In its editions from 1915 to 1925, the Duden also cited the masculine as well as the female gender with the indication “popular”.

In recent times, the use of the feminine can be found increasingly in literature.

The neuter is common in Austria. It can also be found in specialist literature and music dictionaries. An early evidence can be found in the Handlexikon der Musik from 1882. The German music researcher Curt Sachs probably contributed significantly to the spread of the neuter sex with his Handbuch der Musikinstrumentenkunde (1929). He states: "As a derivative of the Latin triangulum 'triangle', the name is entitled to the article 'that'."

In its 24th edition in 2006, the Duden included all three articles.