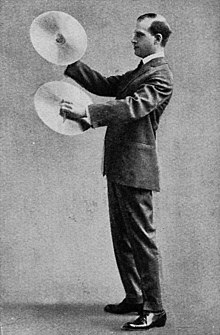 Metropolitan Opera drummer with a pair of cymbals (1917)

The pool ( English cymbal, Italian Cinello or piatto, French cymbale ) is a slightly convex , usually made of a bronze alloy consisting dish-shaped metal disk of different alloy, shape and dimensions that are either used in pairs and manually or mechanically struck against each other to the sound generator (as clash cymbals or cymbals ) or, mounted on a stand, struck with wooden or twine mallets . In terms of instruments, the first-mentioned cymbals belong to the counter-strike idiophones , the latter to the service idiophones. In modern drums , the cymbals are attached to stands and struck with sticks.

Cymbals produce a hissing sound rich in overtones with a long sustain , but without a specific pitch . The diameter of orchestral cymbals, often pair cymbals, varies - depending on the required sound volume - between 40 and 60 cm.

Depending on the use and style of play, they are divided into different types. A distinction can be made between clock-indicating and accentuating cymbals, although the demarcation is not clear. The small cymbal is also called a cymbal (outdated names are cymbel and cymbal ).

Basins have been known since ancient times, and their origin is likely in Asia . For the modern percussion cymbals, the Chinese Empire and Turkey have exerted the greatest influence on the development. With the janissary music , the cymbals reached Central Europe in the course of the 17th century, where they found their way into the military orchestras and later also into the symphony orchestras . They play an important role in military music and, together with the bass drum, mark the basic beats.

The production of a basin is a complicated process and involves several work steps. In particular, the metal alloy , but also the machining processes of hammering and turning - which are still carried out by hand in high-quality models - significantly influence the sound of the later cymbal.

Two alloys are common for the main manufacturer brands Paiste , Zildjian , Sabian , Meinl , Soultone, UFIP, Istanbul, Anatolian and others: the more frequently used so-called B20 alloy (around 20% tin , 80% copper ) and B8 (with a correspondingly lower tin content and reddish coloring). Inferior quality and cheaper cymbals are usually made of brass or nickel silver .

The usual manufacturing process is forging: blanks, cast discs or lumps of metal are shaped by hand by hammering with small forging hammers and then completely, partially or not turned off. This gives an original and characteristic sound. Basin: The process begins in the foundry, the copper-tin mixture is melted at 1150 degrees Celsius. This temperature is generated by a thermal induction process. As soon as the metal castings have hardened again, they are brought into the furnace room, where they are sorted by weight. This ensures that there is only minimal waste per blank. Any contamination is carefully removed from the molds. In order to pre-form the heavy castings for basin production, they are heated and rolled six to twelve times. With each pass, the distance between the rollers is reduced in order to compress the pool to a fraction of a millimeter to the specified thickness of the pool. The blanks are rotated with each pass. Then the large blackened blanks are put down to cool and harden. At this point the metal is extremely stiff and brittle. After cooling, the blanks are heated again and thus softened in order to shape them in the center with a bell or a bowl. Then they are heated again before being immersed in cold water. Now a hole is drilled in the middle and the blank is brought to the approximate final diameter.

In the upscale price range, many pool series are completely handcrafted. Every stroke of the hammer changes the shape and sound of a cymbal; this makes every pool unique. The bronze is compressed with every blow of the hammer. This creates dimples that make up the tonal complexity of the cymbal. The placement, frequency and intensity of the hammer blows significantly influence the sound of the cymbals. Cheaper products are pressed with presses weighing up to 20 tons. The sophisticated shape of the cymbal raises the pitch and ensures a brighter sound. Then the pelvis is turned off and thus brought to the desired strength. It is very important to get the correct shape and tone during this process. Then grooves are cut into it, which allow the cymbal to vibrate better in order to develop its full sound. In the next step, the trimmer reduces the pool to the exact size and at the same time smooths the pool edges. The basins are then stored on shelves where they can recover and mature from constant heating.

Cymbals that set the rhythm 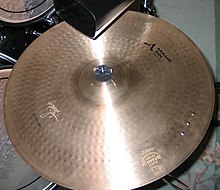 Ride cymbal (ride cymbal) usually have a diameter of 18 to 24 inches have (about 45 to 60 cm) and can have very different material thicknesses. Depending on how they are processed, they have a relatively defined stop (“ping”), which is underlaid by a background noise (“wash”). Some cymbals sound relatively dry, other thinner ones produce more "white noise" and thus a rather undefined soundscape. If you play the tip ("bell"), you will hear a bright and clear bell-like sound. If, on the other hand, you play the edge, the proportion of overtones increases accordingly and the cymbal can rock up. Depending on their application, there are some special forms, such as sizzle rides, which have symmetrically arranged holes with small, loose hollow rivets in order to create a flowing, pronounced background noise or the flat ride, which has no crest and therefore has fewer overtones.

A continuous pulse or fixed rhythmic figures ("patterns") are usually played on the ride pool.

The hi-hat (also high hat and Charleston machine) enables mechanical sound generation with cymbals and is part of a drum kit . It consists of a pair of basins, the upper top basin and the lower bottom basin. These are mounted horizontally on a stand with a pedal. This enables the hi-hat to be opened and closed with the left foot in the standard set-up using a spring balancer. Hi-hat cymbals are usually 13 or 14 inches (approx. 33 to 36 cm) in size; 15-inch hi-hats (approx. 38 cm) are also used in hard rock. There are very different designs. Bottom basins with holes were made to ensure better air balance. With some manufacturers, the outer edge of this lower cymbal is wavy, for example in the Sound Edge series from Paiste .

The crash ride pool is a mixture of the crash and ride pool. It's heavier than the former, but lighter than the latter.

Sound of the china cymbal

The crash cymbal, also known as the tee or accent cymbal, is mounted on a cymbal stand. When you hit it (with a drumstick , broom or the like) you create an initially exploding sound that then, depending on the strength and size of the cymbal, etc., fades away more or less long. The material here is mostly bronze ; the thicker, the louder and lighter, the thinner, the darker and finer, but also the quieter the sound. Common sizes are between 12 and 20 inches (about 30 to 50 cm).

Crash cymbals can be ground , hammered or both to change the sound . They are mostly not used in the groove , but to set accents.

The China cymbal ( china cymbal, "Chinese cymbal") is an exception in that it differs significantly from the other types of cymbals due to a different cultural background. It also has an exposed dome. In contrast to the other pool types, this is often not round, but rather cylindrical. The most striking feature is the curved edge, which makes the basin look like a kind of elongated Gugelhupf shape in cross section . The diameter is usually 14 to 24 inches (about 35 to 60 cm). The sound image is comparable to that of a crash cymbal, but rather “dirtier” or “rawer” and shorter. China cymbals are often used for short, explosive accents or staccato figures. Larger China, often provided with sizzles, have also found their way into jazz and big band music as ride cymbals. To protect the edge of the pool, these are usually hung upside down or vertically so that you can hit the bent edge flat. The Paiste company has solved this problem with the so-called Novo China - the dome is shaped on the other side.

Splash cymbals (splash cymbal) are comparable in type and function to crash cymbals, but they are significantly smaller in diameter (about 6 to 12 inches, that's about 15 to 30 cm), which is why they also have a different sound characteristic have: Splash cymbals respond quickly, sound bright, lively and hardly reverberate. They are used for short, bright accents. Stewart Copeland and Manu Katché in particular established the use of splash cymbals.

In addition, there is a whole range of different effect cymbals with various special features such as holes or clamps to expand the sound spectrum of the drum set. The creativity of the cymbal manufacturers is almost inexhaustible, as is the list of names under which these cymbals are on the market. Thus, the range of "cups", "bells", "stacks", "mini-Chinas", "jingle hats" or similar instruments is growing, although not all of these can be clearly assigned to one of the groups mentioned above. Cups or bells are cymbals that produce a sound similar to the bell of a ride cymbal. Stacks are several basins that are placed directly on top of each other. Usually one basin is much smaller than the other or one basin is placed in a china. They produce very "dirty" and short sounds that are mainly used in drum and bass and comparable electronic styles.