This article is about a percussion instrument . For further meanings see Tom Tom . 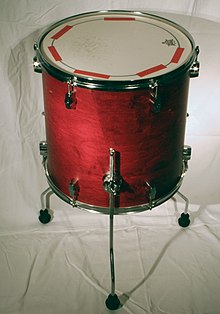 The TomTom (also tom-tom or Tom ) is a cylindrical, rarely bulbous, one or both sides equipped with fur, built in different sizes drum and is an integral part of the drum sets and instruments of marching bands .

Tom-Tom is onomatopoeic and has been derived from the Bengali word tomtom since the 18th century . Related terms for drums are tam tam in other East Indian languages, tong tong in Malay and tamattama in Sinhalese for a small pair of kettle drums in Sri Lanka .

The boiler is mostly made of plywood, rarely plastic, even more rarely metal or other materials. When manufacturing from wood, several layers are built up. Thinner shells, for example with four layers, are provided with reinforcement rings. Different types of wood are used. In the 1960s, beech kettles were common. Tropical wood was also used, for example in the high-priced Sonor Signature series. One of the most popular woods currently used in Tomtom construction is maple , which offers a warm, balanced and sustain-rich sound, can be processed very well, and there are abundant resources, especially in North America .

The eardrums are stretched with metal hoops, more rarely made of wood, and can be - within certain limits - tuned tonally and adjusted to the preferred musical style in terms of tightness. The typical sound of the tom tom can generally be described as center-weighted. Until the 1940s it was common practice to nail the resonance heads - natural heads at the time - to the respective bowl; therefore these were not tunable.

A special feature of tom heads (as opposed to snare heads) is that they can be used as batter heads as well as resonance heads.

A drum kit has any number of toms, depending on the musical style and the ideas of the drummer. In today's standard structure, there are usually three toms of different sizes and tom versions.

A distinction is made on the drum set:

The frame height of the tom toms ranges from 14 to 60 centimeters. The industrial dimensions for hanging toms are between 6 and 16 inches , for floor toms between 14 and 18 inches in diameter. There are differences in the depth dimension.