In practice, the pitch is equated with the frequency (number of vibrations per time span) of an audible tone, more precisely: with the basic frequency , i.e. the frequency of the lowest partial tone in the relevant sound (see e.g. mood (music) , interval (music)) , Concert pitch ). In addition to the tone duration , loudness and timbre , the pitch is an important property of musical tones and the vowels of spoken language .

The American National Standards Institute defines pitch as a property of auditory sensation "according to which sounds can be classified on a musical scale (ANSI S1.1)". In this case, pitches are perceived as higher or lower in the sense of a musical melody, which, however, requires that the audible sound is stable enough in terms of frequency and clarity to distinguish it from a noise. With artificially generated pure tones ( sinus tone , monofrequency sound), the pitch correlates with the frequency of the tone. Usually the pitch is simply understood as the fundamental frequency of a periodic sound; But especially in music, harmonic and melodic relationships also influence perception.

Auditory sound to which the human ear can assign a pitch sensation is called tonal. Sound signals in which the time structure repeats periodically (e.g. sound of vibrating strings) have a tonal character. However, non-periodic sound signals also have a tonal character in which narrowly defined frequency ranges are emphasized (e.g. howling wind or the sound of kettledrums ).

Although the pitch can be characterized by a frequency, it is not only an objective physical property but also has a psychoacoustic component. This has been and is a central problem and the subject of ongoing research into speech synthesis and its perception through the ear. For psychoacoustics, it is interesting how high or low tones of a certain frequency are perceived. For this purpose, a separate pitch scale is built up, the perceived pitch . The perceived pitch is also called tonality referred.

Origin of the use of the term

In many languages, tones are referred to as “higher” or “lower” in comparison, and melodies (i.e. sequences of tones) are perceived and referred to as “rising” or “falling”.

These “spatial” designations are probably based on the statistical occurrence of tones and noises occurring in nature, which are perceived spatially and identified as “from above” or “from below”. The numerically larger (high) or smaller (low) frequency of a tone fits this designation. But it cannot be the cause, because the knowledge that sounds are based on vibrations is much more recent than languages.

Relationship between frequency, semitone and octave 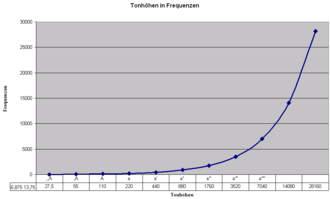 In music , the pitch is a measure ( parameter ) that can be described separately from other measures or properties. The term contains a linear and a helical (helical) component. The linear pitch perception, which is accompanied by an approximately geometric change in the underlying vibration frequencies, is often coupled to the impression of a linear change in brightness or height localization in one's own body (chest to head). The helical component is expressed in the fact that the tones that sound an octave higher or lower - when the frequency is doubled or halved - are perceived as similar or the same. Tones that are one or more octaves apart are therefore grouped together in a tone class with the same pitch class and denoted by the same name (possibly with an addition to identify the octave space ).

For musical purposes, notes that follow one another or that sound together should " sound good ". However, this is only the case if these tones adhere to certain frequency relationships, namely those of musical intervals . The frequency relationships that are useful for musical purposes are summarized in scales . The designation of the scale tone is then used to designate the (relative) musical pitch .

If the frequency of a reference tone is also given, an absolute pitch can be assigned to each musical tone. Today's musical notation usually reflects absolute pitches; The decisive factor is the definition of the a 1 pitch as a so-called concert pitch at 440 Hz, which was agreed by the 1939 International Voice Tone Conference in London. Several tone symbol systems are used for the written notation of pitch .

However, the character of a melody or a chord is essentially independent of the absolute pitch. Melodies or chords can e.g. B. be shifted as a whole by intervals ( transposing ). The absolute pitch with which a piece of music is actually performed is based on the decision of the musician , the vocal possibilities of the singers and, if applicable, the properties of the instruments used:

A few people have a so-called perfect pitch (also pitch memory ). You are able to name a tone without any tools and to sing it correctly according to a given tone name.

A distinction must be made between absolute hearing and relative hearing , which enables us to name the interval between two consecutive tones and to sing correctly when given abstractly ( from the sight ). Both relative and absolute hearing can be specifically trained .

Another aspect of musical hearing is the ability to recognize imperfections in intonation - i.e. small deviations in pitch from a musically planned value. It is called the intonation hearing. This ability has its physiological limit in the frequency discrimination of the hearing. However, this limit can also be shifted through training. Experiments have shown that eight hours of training are enough to get trained musicians to be able to differentiate between frequencies. In musical practice, however, the hearing of intonation requires much more than a trained frequency distinction. In this case it is necessary to compare presented pitches with realized ones. An average deviation of three cents (3/100 semitones) has been measured in experienced singers . Measurements at the Düsseldorf Institute of Stringed Instruments Guitar & Lute showed that the pitch is perceived as correct if the intonation is within a range of around 1 cent.

Both the objective measurement and the subjective perception of pitches are subject to a certain inaccuracy (“blurring”), which is based partly on physical and partly on auditory-physiological conditions.

Frequency and time are linked (conjugated) quantities and thus obey an "uncertainty relation", as is also clear from the Fourier transformation and its applications. The uncertainty relation has the effect that the frequency cannot be averaged more or less precisely for a precise moment, but only for a certain duration. For example, the frequency of a periodic sound event can only be measured with absolute precision if its duration is completely indefinite, i.e. infinite. Conversely, its pitch becomes more indeterminate the shorter the duration. This results in the useful knowledge for music-making practice that intonation accuracy is much more important (because it is more audible) in slow passages (long notes) than in fast passages (short notes). Strings often say - to the surprise of amateurs - that it is by no means easier to play slow pieces.

After frequency analysis and conversion to nerve impulses in the inner ear , transmission takes place in frequency-specific nerve pathways, which are also multiplied in several parallel strands of the auditory pathway . Further processing takes place on several levels in the brain. This process is much more complex than a simple technical spectral analysis. How the decoding of periodicity during hearing from the stream of nerve impulses in the auditory midbrain ( colliculi inferiores ) works has not been sufficiently clarified; one hypothesis describes the function according to the principle of the coincidence detector. It has been proven that several signal periods are required so that a periodicity - and thus the basic information for the subsequent representation of pitch in the cerebrum - can be registered. Interestingly, the pitch of a natural tone of 100 Hz, with overtones , is perceived more than four times as fast as a sinus tone of the same frequency, since the brain also uses the currents of nerve impulses that are triggered by overtones.

A sinusoidal sound signal that z. B. only lasts half a period, is not perceived by the ear as a tone, but as a cracking noise with an indefinite pitch. The minimum time to trigger a discrete pitch sensation depends on the frequency. “For a sinusoidal signal of 1000  Hz , this time value is around 12  ms ; It therefore takes about 12 periods for a sinusoidal signal with the frequency f = 1000 Hz to be recorded by the ear as the pitch. 3 to 4 periods are necessary for a signal of 200 Hz, about 250 for a signal of 10 kHz. " 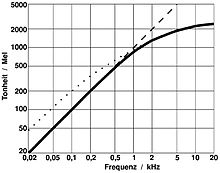 In psychoacoustics, the tonality is a perception quantity with the unit of measurement Mel , which can be used to classify sound events in terms of their perceived pitch. The picture on the right shows how the relationship between the frequency of a sinusoidal tone and the perceived pitch is established based on listening tests . For complex "tones" (strictly speaking: sounds in the sense of partial tone complexes ) as they occur in reality ( vibrating systems ), these perception variables of psychoacoustics do not apply directly, and the deviation from the frequency scale is up to 5 kHz within that of the ear imperceptible boundaries.

The perception of pitch is closely related to the physiology of the inner ear and the auditory brain. The inner ear performs a frequency analysis of the signal it hears. Different frequencies lead to excitation of nerve cells in different places in the inner ear . The place at which nerve cells are increasingly stimulated can be used to determine the pitch. The exact details of the function are still the subject of research and there are several models of this.