In music, sound refers to a sound event (as well as its auditory impression and intellectual abstraction) that is generated by musical instruments , the human voice or otherwise by means of an elastic body and to which a more or less exact pitch can be assigned. While the physical properties as a combination of pure tones and noise components or (adventitious to the fundamental oscillation of the sinusoidal vibration) harmonic overtones can be analyzed and described, the subjective sound is perception of psychoacoustic factors, cultural experience and aesthetic expectation dependent.

In music practice and music theory , tones are elements of a tone system or a (mathematically describable) tone structure , which are in an interval relationship to one another and are described by tone symbols and / or notes .

The term “tone” comes from tonus , the Latinized form of the ancient Greek τόνος, tonos, “tension” for the verb τείνειν teinein “tension, tension, relax”. The meaning of the word varies depending on the context. More on the complexity of the description, analysis and perception of sounds can be found in numerous articles. In addition to universals of music perception and objective aspects such as pitch , sound , tonality , overtones , sound spectra , aspects of subjective perception e.g. B. under hearing typology , auditory perception , music psychology , pitch perception and psychoacoustics . The atonal music is not flat voice, silently, silently, without trace or even inaudible; rather, the word atonal refers to a lack of tonality system .

For a more detailed description of a tone, different parameters are used depending on the access . Usually these are the following:

Temporal structure of an instrumental sound

The volume ratio (amplitude) of the partials changes over time. These volume ratios determine the timbre of the tones. The voice is also an “instrument” in this respect and generates tones in the sense mentioned, in which so-called formants influence the color of the tone.

Tone and sound in physical acoustics 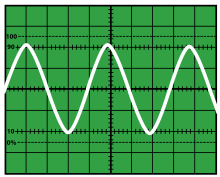 While in physical acoustics with sound only the pure infinite sine wave understands one's vocal or instrumental generated sound from the perspective of physical acoustics, a complex sound signal approximately in many cases, a sound is. In physics, sound is understood to be a periodic sound event composed of sinusoidal tones, in which the frequencies of the partials are in an integer relationship to one another, that is, they are "harmonious" to one another. However, this is a simplified model that can only be approximately applied to real sounds.

In fact, real sounds are generally more complex, with noise components and inharmonicities playing an important role. In the human voice and in wind instruments, the partial composition is largely harmonic and is in good agreement with the simple model. In the case of string instruments, the frequency composition is only approximately harmonic, and in the case of percussion instruments only individual partials are almost harmonic, while the overall spectrum is rather inharmonic. Such discordant sounds that are in physical acoustics as a clay mixture called such occur. B. on timpani , bells , stick games , tubes or membrane-like bodies. A pitch impression can also on so-called formants based, for example, at a Maultrommel be influenced by changing of the mouth and throat. Internal structures of noises , such as contained individual frequencies with increased amplitude, can also create an impression of pitch.

The perception of pitch requires a sufficient duration of the sound signal, otherwise pitch blurring occurs.