The jew's harp is a small musical instrument with a sticking tongue , the sound-generating principle of which has long been widespread around the world. A manually excited elastic tongue swings through the open rows of teeth into the player's oral cavity. Their tone is tonally changed by changing the size of the oral cavity and by breathing, in particular individual overtones are audibly emphasized and thus form the actual tones played.

Since a jew's harp has only a limited range , it was almost doomed to become extinct as a solo musical instrument in the course of Central European musical development over the past 200 years. Since all overtones generated by various attack and breathing techniques are based on the fundamental and this fundamental is always represented in the sound, the jew's harp belongs to the drone instruments . In the field of folk music it was supplanted by the harmonica around 1900 , which also produces its notes with penetrating tongues, but only as their fundamental notes. In Central and North Asia, the names for jew's harps are mostly derived from the Turkic word qopuz or from the Mongolian chuur . 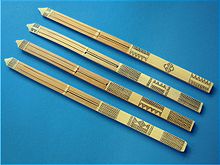 Frame jaw harps made of bamboo, length about 20 cm

It probably originated in Asia. There are many indications that the oldest versions were made of wood (bamboo).

In Europe, the oldest finds were made in eastern France. In 1868 five bronze jew's harps were found near Rouen , probably from the Gallic-Roman period (the 5th to 7th centuries). In Exeter Cathedral there is a stone sculpture of an angel playing a jew's harp on the so-called "singers' gallery" from around 1340.

In German-speaking countries, the instrument was particularly popular in folk music . During excavations in the Hessian castle Tannenberg , which was destroyed in 1399, a jew's harp was discovered, which allows rudimentary references to the Asian model. Sebastian Virdung depicted a jew's harp in his Musica sucked and pulled out from 1511. In the woodcut series “Triumphzug des Kaiser Maximilian ” by Hans Burgkmayr from around 1515, a court jester playing a jaw harp is depicted.

The jew's harp found its way into high culture music in the baroque period , when folk instruments were popular. Johann Georg Albrechtsberger wrote several concerts for it. Bruno Glatzl, a Benedictine priest from Melk , gave a concert for Emperor Joseph II as a nationally known player .

The most famous virtuoso on the Jew's Harp, however , was Franz Koch, born in Mittersill in 1761 . In the “Allgemeine Musikischen Zeitung” no. 42 of July 18, 1804, one reads of a performance in Braunschweig: “Mr. Franz Koch entertained in his concerts on the Brummeisen with many pieces, and was very well received.” From a performance by the same gentleman Koch with the "Harmonica" a year later in Frankfurt am Main is also reported in the Allgemeine Musikische Zeitung No. 24, then by a further appearance in Vienna in March 1818. A last appearance in Vienna in the Musikalische Zeitung is in November Mentioned in 1823. In the reports cited here, the instrument is referred to several times as the "harmonica" and only once as the "humming iron".

In Stalinist Russia, folk music was placed at the service of state ideology and the jaw harp was banned, possibly because of its connection to shamanism , which was considered backward.

In Latin the jew's harp was called crembalum or trombula in Europe .

Different designs including their housings

In the Hornbostel-Sachs system , jew's harps are counted among the plucked idiophones , other instrument scholars want to count them among the aerophones in their classifications of musical instruments . The shape of the bracket varies from region to region, but the principle of operation is the same everywhere: A leaf spring is fixed as a spring tongue between the legs of a U-shaped frame that is placed in the oral cavity and is stimulated to vibrate with the finger. The pitch of the root is primarily determined by the length, thickness, hardness and shape of the nib. The width of the spring primarily affects torsional vibrations . The decisive factor is the overtone content of a jew's harp. The closer the distance between the spring and the bracket, the better the overtone content.

Most jew's harps are made of metal, e.g. B. iron , bronze or brass and belong to the type of hoop jaw harps, in which the tongue protruding as a thin hook over the hoop is plucked with the finger. In the other type, the jaw harp, the tongue is enclosed on all sides by a frame and one end of the frame is stimulated directly with the finger or via a cord. Southeast Asian bamboo frame jaws include the genggong , which is played in Balinese music and the music of Lombok , the karinding in western Java , the angkuoch in Cambodia , the ruding in northern Borneo , the kubing in Mindanao and the hun in the Isan region in northeast Thailand and Laos . The Vietnamese đàn môi is a jaw harp made of brass that is held against the lips rather than against the teeth. 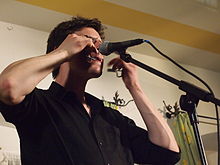 To make music, the thighs are placed lightly against the incisors, the lips lie on the thighs and thus the spring tongue can easily swing into the open oral cavity, which acts as a resonance chamber. By changing the volume of the oral cavity and its geometry (corresponding to the formation of the vowels as in "aou-ö-ei"), a tone with different overtone content and sound spectrum is created . This sound is amplified by simultaneously blowing or drawing air through it. In order to expand the range, musicians often switch between several jaw harps in their hands.

“During the times of experimentation at the end of the 18th and early 19th centuries, there were very virtuoso instrumentalists on the jaw harp. So z. B. Johann Heinrich Scheibler mount up to ten jew's harps on a support disc. He called the resulting instrument AURA . The jew's harps were tuned to different basic tones, which even enabled chromatic tone sequences. "

Mouth movements similar to those of the jew's harp are used to create sound in the mouth arches . European Jew's Harps have been in use in large numbers in southern Africa, the main area of ​​distribution of African mouthbows, since the 1930s.

The musical application palette ranges from the simple “ Boing! “From cartoons to modern music and classical music. The jew's harp can be found almost all over the world as an instrument of folk music , it is also part of the traditional instrument repertoire of the Alpine region and is at home from Hungary and Slovenia via the German and Italian-speaking Alpine countries to France and further to Sardinia and Corsica.

The Austrian way of playing, in which several Jew's harps are tuned to the main levels ( tonic , dominant and subdominant ) of the scale, enables the Jew's harp to be used within the major-minor harmony , in contrast to pure drone playing , so that this instrument is in the Austrian Folk music is used without interruption to this day. Johann Georg Albrechtsberger , Beethoven's teacher , wrote seven concertos for jew's harp, mandora and strings around 1765 , three of which have been preserved in a library in Budapest. In it he interpreted melodies and stylistic devices of contemporary Austrian folk music and was able to incorporate the jew's harp into the harmonies of the Viennese classic thanks to the use of different jew's harps for the main stages . The Jew's Harp Game in Austria has been recognized as an intangible cultural heritage in Austria since 2012 .

The jew's harp is also widespread in Central Asia and the neighboring mountain regions, for example in Tuvinian music , where it is used together with overtone and undertone singing . This style of music became known through the groups Huun-Huur-Tu and Yat-Kha, which performed at world music festivals and in classical concert halls .

Today, many people are familiar with the sound of the jew's harp from the theme song of Sesame Street . In the pop charts the jew's harp came in the seventies by the group Medicine Head with songs like One And One Is One or Rising Sun . The Jew's Harp can also be found in Folk Metal and Viking Metal . An example of the latter is the early Viking metal band Bathory .

Hans Werner Henze uses the jaw harp in his recital for four musicians, El Cimarrón (The Runaway Slave), autobiography of the escaped slave Estebán Montejo , from 1970.

In the radio play and cartoon Die Biene Maja , the jumps of the grasshopper Flip are accompanied by music with a jew's harp.

Molln near Steyr in Upper Austria, where the guild of jew's harp makers existed from October 15, 1679 to 1938, is still the world's most important place of manufacture . Between 1779 and 1893 there were always over 20 masters working in Molln, and in 1818 there were even 34 masters in the town. Since 1984 there have only been 2 master workshops, with the Schwarz company exporting around 300,000 pieces to 19 countries each year.

Jew's harps are also manufactured in Norway, the East Siberian Republic of Sakha (formerly Yakutia) and the South Russian Republic of Tuva , as well as in Slovakia, Germany, Poland, Italy, Hungary, Vietnam, Indonesia, Afghanistan, India, the Philippines and the USA.