A sine tone , also simply called tone in acoustics , is a sound event whose generating oscillation can be described mathematically (except at its beginning and end) by an infinite sine .

Strictly speaking, it is a theoretical construct that in its perfect form neither occurs in nature nor can be technically realized. "Naturally" generated tones, for example by musical instruments, are not (sine) tones in the acoustic sense, but rather sounds because they always involve several natural frequencies ( overtones ) of the vibrating body ( string , air column , etc.). However, the tuning fork as well as the stopped organ pipe in a very wide scale produce sounds with little overtone, which approximate the pure sine tone.

The sound of the sinus tone is generally perceived as sterile or empty:

It appears "whistling" because pipes ( flutes ) are relatively poor in overtones .

The characteristic sound of a musical instrument is created as the sum of different sinus tones ( fundamental tone + overtones), the amplitudes and phases of which sometimes change while the tone is being played.

The concept of the sine tone is important for spectral analysis , as sine tones represent the basic building blocks of every sound event. With the help of Fourier analysis , any time-dependent signal can be represented as the sum of sinusoidal signals of different frequency and phase. 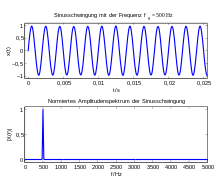 Sin function over time (above) and in the spectral display (below)

An oscillation can be described by describing the current deflection y (t) as a function at each point in time  t . In the case of a sine tone, this oscillation function has the form

The deflection  and the amplitude are distances (lengths). Instead, various other quantities can be used that describe the current state of the vibrating body, such as the sound pressure or the speed of sound ; the amplitude is then the maximum value that this quantity assumes.

The sine tone is used e.g. B. in the calibration and measurement of the frequency responses of audio equipment, but also in hearing tests or as a mixture of several sine tones in the multi-frequency selection process .