Its origins go back to the 18th century. It is named after the French mathematician Jean Baptiste Joseph Fourier , who examined Fourier series in his Théorie analytique de la chaleur in 1822 .

Fourier analysis is of exceptional practical importance in many branches of science and technology. The applications range from physics ( acoustics , optics , tides , astrophysics ) to many sub-areas of mathematics ( number theory , statistics , combinatorics and probability theory ), signal processing and cryptography to oceanography and economics . Depending on the branch of application, the decomposition experiences many different interpretations. In acoustics, for example, it is the frequency transformation of sound into harmonics .

From the perspective of abstract harmonic analysis , both the Fourier series and the Fourier integrals as well as the Laplace transform , the Mellin transform or the Hadamard transform are special cases of a more general (Fourier) transform.

Variants of the Fourier transform 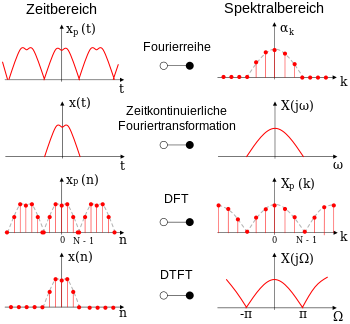 Depending on the properties of the function to be examined, there are four variants, as shown in the adjacent figure:

With all transformations, a frequency spectrum is obtained that, depending on the variant, is either discrete (infinitely sharp lines) or continuous:

Every continuously differentiable function that is defined on the interval can be expanded into a Fourier series, that is, both sides of the transformation exist. With the basic frequency and the circular frequencies, the following applies:

More general types of functions can be developed in a Fourier series, such as section-wise continuous, bounded functions or, more generally, measurable square-integrable functions.

In the case of a periodic polygon (points connected by straight lines), the kinks and any jumps that may be present make the contributions to the Fourier coefficients

With these and the mean value of a period

the output function can be expressed as the harmonic sum

The leaps in value

at the jump points , the derivative jumps are calculated as the difference between their right and left-hand limit values or

analogously at the kinks as the difference between the first derivative on the right and left.

The coefficients are times the value; With this calibration of the Fourier coefficients, the amplitudes of the harmonics are equal to the amounts of .

The continuous Fourier transform is defined by

The inverse transformation is:

In the literature one can also find other definitions that have 1 as a prefactor instead of just or. This depends on the standardization conventions used. The variant used here has the aesthetic advantage that the prefactor is the same for forward and backward transformation. It also simplifies the representation of Parseval's theorem :

In physics, for example, this condition is important for the conservation of energy through the Fourier transformation. From a mathematical point of view, the equation means that the Fourier transform is a unitary mapping , which is fundamental in quantum mechanics , among other things .

The relationship between the two types of Fourier transform is mediated by.

The inverse transformation is then

Since the variable is instead used for integration, the prefactor is omitted in this form of representation.

The Fourier transform has important areas of application , especially in engineering , such as signal processing and physics . Special terms and nomenclatures are also used:

Time range
( English time domain ) If the analysis or representation takes place as a function of time, one speaks of the time domain. If the changeable variable describes a position in space (e.g. in digital image processing ), the area is also referred to as a local area or local area .

Frequency range
As the frequency domain or space ( English frequency domain ) of the image area after transformation (eg., By Fourier or Laplace transform ) respectively. These names go back to work from the late 1940s at the MIT Research Laboratory of Electronics .

In physics, the Fourier transformation in wave mechanics represents the link between time domain and frequency space. If instead of time signals signals are considered as a function of location, the Fourier transformation is a link between the spatial space and the spatial frequencies or wave numbers present in the frequency space . In several dimensions the wave numbers are described in the form of wave vectors . In crystallography, the frequency space that is reciprocal to location space is called reciprocal space .

As early as 1740, mathematicians such as Bernoulli and d'Alembert discussed the possibility of representing periodic functions as trigonometric series. The series expansion known today for periodic functions goes back to the French mathematician Fourier. At the beginning of the 19th century he published his work Théorie analytique de la chaleur , in which he assumes that every function can be developed into a trigonometric series. He used these series in particular to solve the heat conduction equation . In this work he also introduced the continuous Fourier transformation in the form of a cosine transformation . With this he tried to solve the heat conduction equation on unlimited quantities, especially on the real axis.

Peter Gustav Lejeune Dirichlet investigated these trigonometric series, which are now called Fourier series, and was able to prove the first convergence properties. In 1829 he was able to show that the Fourier series converges point by point if the output function is Lipschitz continuous . For the exact calculation of the Fourier coefficients, Bernhard Riemann then introduced his term integral and discovered the localization principle in 1853. Which states that the convergence or divergence and possibly the value of the Fourier series of a function in the conduct of in an arbitrarily small neighborhood is determined uniquely.

It was not until 1876 that Paul Du Bois-Reymond found a continuous function whose Fourier series does not converge point by point. In its set could Fejér However, in 1904 shows that the Fourier series for each continuous function in the arithmetic mean converges. In 1915 Nikolai Nikolayevich Lusin raised the question of whether the Fourier series converges for every function . This could only be answered positively in 1968 by Lennart Carleson and Hunt generalized the result to functions with in 1968 . However, the prerequisite is essential, as the example of an integrable function with a Fourier series diverging everywhere, which Kolmogorow found in 1926, shows.

Since the Fourier transformation has a large area of ​​application outside of mathematics, one is interested in an algorithm with which a computer can calculate the Fourier coefficients with as little effort as possible. Such procedures are called fast Fourier transforms. The most famous algorithm comes from James Cooley and John W. Tukey , who published it in 1965. However, an algorithm was developed by Carl Friedrich Gauß as early as 1805 . He used it to calculate the trajectories of the asteroids (2) Pallas and (3) Juno . A variant of Carl Runge's algorithm was first published in 1903 and 1905, respectively. In addition, limited variants of the fast Fourier transform were published before Cooley and Tukey. For example, Irving John Good published such an algorithm in 1960.

We consider continuous, from the time real-dependent functions or operations (eg. As a vector-valued functions) , which after a time , repeat, so periodic with period are . Joseph Fourier postulated in his work that periodic, harmonic oscillations, i.e. sine or cosine functions, different phases and amplitudes and precisely defined frequencies can be composed. Let us consider such a composite function with summands:

Because a sine is only a phase-shifted cosine, the series representation could be restricted to cosine functions. We also get the sine terms immediately if we use the addition theorems :

Together with we get a phase-free representation

In the next step, the sum is to be rewritten with the help of complex numbers . Complex coefficients are then allowed and the series becomes complex-valued. If real-valued functions are considered, this can be recovered as a real part of the sum. From the Euler formula or from the definition of the trigonometric functions with the exponential function follows

With the complex coefficients , and for n> 0 we get a sum with also negative indices

So we now know the trigonometric sum in different representations. However, it was asked to approximate a periodic continuous function using such a sum. To this end, we note that the complex coefficients , and thus also those of the other representations, can be recovered from the sum function.

To do this, the above equation is multiplied by and then on both sides over the interval , i.e. H. integrated over a period. The following statement can be achieved with forming:

For the -th integral on the right hand side:

So only the summand for n = 0 makes a contribution, so the integral is simplified to

With the Dirichlet core

The prerequisite for the derived Fourier series is the periodicity of over the time interval . Of course, there are also non-periodic functions that do not meet this requirement for a finite time interval. As already shown, the -th harmonic has the frequency . The difference of the -th upper frequency from the previous one is , that is, the upper frequencies have the distance . For towards infinity their distance tends towards zero - in the limit case the sum becomes the Riemann integral .

The Fourier integral, the continuous Fourier transform, is thus given by

The second equation can be derived in the same way as for the series.

The specified relationship pair applies u. a. again for square integrable functions.

For example, in a linear time-invariant physical system, the frequency is a conserved quantity, and the behavior can be solved individually for each frequency. Applying the Fourier transform to the differential equation gives the frequency response of the system.

The abstract harmonic analysis is the further development of the Fourier analysis on locally compact topological groups . An integral can be defined on these groups with the help of the Haar measure , which includes the Lebesgue measure as a special case. Central to the abstract harmonic analysis is the concept of character, which was introduced by Lev Semjonowitsch Pontryagin . This is a continuous group homomorphism from the locally compact, Abelian group into the sphere . In analogy to linear functionals and the dual spaces , their totality forms the dual group . The term dual group is justified by the duality principle of Pontryagin . From the point of view of the abstract harmonic analysis, one then understands the figure