This article deals with the mathematical term period in the meaning of the distance in the regular recurrence of a function value. See Period (decimal fraction) and Period for more meanings of the term.

Illustration of a periodic function with the period

Function graph of the sine function

Function graph of the tangent function

Periodic functions occur naturally in physics to describe mechanical , electrical or acoustic oscillation processes . That is why a period is often referred to as (English: T ime).

Just as many real functions can be developed in power series, one can, under certain conditions, develop a periodic function as a series of sine and cosine functions: see Fourier series .

Periodic sequences can be understood as special cases of the periodic functions.

Functions that are not periodic are sometimes referred to as aperiodic to emphasize this .

Periodic function
above: . (blue), below: subset of (blue), purple: period

A real number is a period of a function defined in , if for every out :

The function is periodic if it allows at least one period . One then also says, be " -periodic".

For , which is often the case, the first quality is always fulfilled.

Characteristics of the periods

The following properties apply to the period:

Sum of cos and sin functions

Sum of cos and sin functions

In the example for the definition, a function given on a half-open interval was continued in the upper part of the picture by simply shifting it by integer multiples of to a periodic function of the period . This type is called a direct periodic continuation, as opposed to the even and odd periodic continuation.

The following formal definition also provides a way of evaluating a periodically continued function with a computer, since the rounding function used is implemented directly or indirectly in many mathematical systems.

Definition
If a function is given on the interval with , then the function with

Periodic continuation of a parabolic arch

Example: Periodic continuation of the parabolic arc with the period . The function value at the point (e.g.) 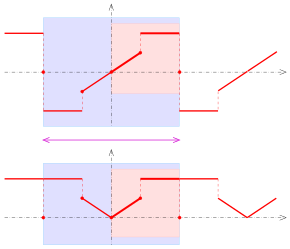 Periodic continuation of the function in the pink area:
top: odd, bottom: even

The function defined on the interval is now continued (as described above) directly periodically. This creates a defined, odd periodic function of the period .

Straight continuation:
The analogous procedure with

returns an even periodic function of the period .

In the picture one on the interval given function (two line segments, red) un just a -periodic function continued and then developed into a Fourier series (only with sin-terms). You can see how good / bad partial sums of the Fourier series (lengths n = 3,6,12) approximate the function . While is discontinuous (it has jumps), the partial sums as sums of sin terms are all continuous.

In the example is

The concept of the periodic function is not limited to real functions. It can be defined more generally for functions whose source set an addition is declared.

So be an (additive) semigroup , a set and a function. Does a with

for all , then the function is called periodic with period .

Periodic functions as functions on the circular line

Here is a function on the unit circle, i.e. a subset of the complex numbers . Features of the functions such as limitation, continuity or differentiability are transferred to the other perspective.

For example, Fourier series under this map correspond to Laurent series .

Let it be a -dimensional real vector space, e.g. B. . A period of a continuous, real or complex-valued function on or an ( open , connected ) part of is a vector such that

The set of all periods of is a closed subgroup of . Each such subgroup is the direct sum of a subspace of and a discrete subgroup; the latter can be described as the set of integer linear combinations of a set of linearly independent vectors.

If one applies this theory to the real two-dimensional vector space and only considers holomorphic functions , then there are the following cases: