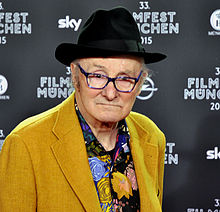 Herbert Achternbusch (born November 23, 1938 as Herbert Schild in Munich ; † January 2022 ) was a German writer , film director and painter . He was particularly known for his avant-garde films.

Achternbusch was born the illegitimate child of a dental technician and a sports teacher and grew up with his grandmother in Mietraching near Deggendorf in the Bavarian Forest . Since his late adoption by his biological father in 1960, he has borne the name of Achternbusch . He attended the Comenius-Gymnasium in Deggendorf and was still preparing for his Abitur when his daughter Eva was born in 1959. The child's mother was a classmate.

After graduating from high school, he first tried his hand at painting and poetry before studying between 1960 and 1962 at the University of Education in Munich-Pasing, at the Academy of Fine Arts in Nuremberg and for three semesters at the Academy of Fine Arts in Munich . He painted and made sculptures (during this time he presented his monochrome paintings and etchings at exhibitions in the Haus der Kunst , among other things ), married his fellow student Gerda in 1962 and got by with odd jobs (e.g. as a cigarette seller at the Oktoberfest ).

In the mid-1960s, on the advice of colleagues and friends such as Hans Erich Nossack , Günter Eich and Martin Walser , Achternbusch switched from painting to writing. From 1964 he published a few small volumes of poems and etchings in irregular succession; In 1969, through Walser's intervention, Suhrkamp Verlag published the first volume of stories by Achternbusch.

His first novel Die Alexanderschlacht (1971) was seen as groundbreaking for the avant-garde of young German literature in the 1970s and 1980s. In 1977, Achternbusch lived up to his self-chosen role as an outsider when he burned the check with the prize money for the Petrarch Prize donated by publisher Hubert Burda at the award ceremony and left the event in protest.

In addition to his narrative work, he wrote regularly for the theater.

At the beginning of the 1970s, Achternbusch began shooting his first small films and came into contact with prominent representatives of German auteur films . He played roles in Werner Herzog's feature film Everybody for Himself and God Against All and Volker Schlöndorff 's TV film Night in Tyrol , and in 1976 he wrote the screenplay for Herzog's film Heart of Glass . His first feature film as a director was Das Andechser Feeling in 1974 .

In 1982, blasphemy allegations against his film The Ghost caused a scandal. The film shows Jesus Christ descending from the cross in a Bavarian monastery to sleep with a young nun . The voluntary self-regulation of the film industry (FSK) decided not to release the film because it attacks the Catholic Church and creates “a basic model of the world that is only pessimistic and nihilistic and that does not allow the viewer any rational processing options”. The film "cannot be expected of the religious feeling of a Catholic part of the population numbering in the millions in a public screening". In Austria, Herwig Nachtmann brought a lawsuit to have the film confiscated in accordance with Article 36 of the Media Act. These were the first cases of confiscation in Austria after freedom of art was enshrined in the Basic Law.

Although the FSK reversed its decision after a short time (the film remained banned in Austria and Switzerland ), hundreds of Catholics protested in Germany in front of arthouse cinemas, some also in the cinema hall, using it as a toilet. The then newly appointed Federal Minister of the Interior, Friedrich Zimmermann , refused the director the prize money for his film The Last Hole , which had won a silver film . Before that, Achternbusch had already been refused funding by the Bavarian state government because in Servus Bayern he had a poet who wanted to emigrate to Greenland say: "I wouldn't even want to have died in Bavaria". On June 29, 1983, Federal Interior Minister Zimmermann also rejected funding for the film Der Wanderkrebs .

After Zimmermann's decision, Achternbusch led a ten-year legal dispute against the Federal Republic of Germany, which he won in 1992 before the Münster Higher Administrative Court. Nevertheless, he was not supported by the television stations and funding bodies for a very long time.

In 2002, he completed the last of his more than two dozen films, The Clapping of One Hand .

Achternbusch was a father of six children and lived alternately in Buchendorf near Munich and at his home in Austria 's Waldviertel . He was Annamirl Bierbichler 's partner for eight years and sometimes lived with her in her home town of Ambach . Most recently he lived on Burgstrasse in the center of Munich. His daughter Naomi (* 1994) is an actress and acted in his films Picasso in Munich and The Clapping of One Hand .

On the occasion of Achternbusch's sixtieth birthday, the city of Munich honored him by displaying the artist's aphorisms on flags throughout the city. The Munich Film Festival honored him in 2008 with a comprehensive retrospective . On the occasion of his 70th birthday, the Museum of Modern Art in Passau presented a comprehensive exhibition of the artist's paintings from 1990 to 2008. "Achternbusch prefers watercolor and mixed media for his pictures , whereby he deals with the color in his works impulsively. In his poetically sensitive, powerful and fantastic works, Achternbusch proves to be a visually powerful narrator.”

Achternbusch himself provided a short version of his life:

“I had to be born in 1938, having already chosen my parents. My mother was a sporty country beauty who only felt comfortable in the city. My father was very easygoing and liked to drink, he was a joker. As soon as I was born, I was haunted by schools, hospitals and all sorts of things. I did my time and insisted on my free time. I wrote books until it hurt to sit. Then I made films because I wanted to move. The kids I have are starting all over again. Good day!"

Herbert Achternbusch is considered an important representative of German auteur films of the 1970s. In most of his films he was author, director, screenwriter and leading actor in one person (exception: Rita Ritter from 1983). He shot almost exclusively with friends like cameraman Jörg Schmidt-Reitwein and painter friend Heinz Braun . The siblings Sepp and Annamirl Bierbichler , with whom he shared a flat in Ambach on Lake Starnberg in the 1980s , also played a major role . Annamirl was his mistress for eight years before leaving her for someone thirty years his junior.

Typical for him were the use of amateur actors in addition to professional actors, which on the one hand often improvised (example: beer fight ), on the other hand often theatrically reciting play and the recurring themes of Bavarian Catholicism and provincialism portrayed as bigoted and being trapped in the petty-bourgeois marriage hell. The camera work is mostly static, the films consist almost exclusively of long shots and half long shots .

Achternbusch consciously broke social taboos with his films. He not only attacked the Catholic Church (see above the ghost scandal ), but attacked what he considered to be mendacious society with intentionally provocative and tasteless scenes:

Almost unnoticed by the general public, Achternbusch has made 30 films, "a continuously developed body of work in which comedy and desperation are closer together than with any other German filmmaker."

“Unconcerned with the usual dramaturgy, Achternbusch formulates radically subjectivist, ignores aesthetic conventions, mixes genres. Achternbusch exaggerates a semantic – as with Karl Valentin , which is reluctantly linguistically logical – into the modern absurd, loads it with real horrors from the past and present and is at the same time always spontaneous and playful.”

The films The Andechser Feeling, The Atlantic Swimmers, The Ghost, The Olympic Champion and Hick's Last Stand have now been released on DVD. Also included in this DVD box set is an interview with Achternbusch from 1988, the documentary Come to the Table and a panel discussion with Achternbusch from the 2008 Munich Film Festival .