The title of this article is ambiguous. Further meanings are listed under Werner Herzog (disambiguation) . 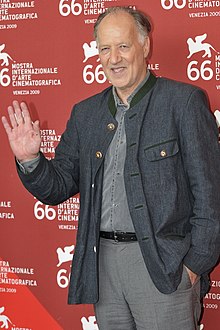 Werner Herzog Stipetić (born September 5, 1942 in Munich ) is a German director , producer , actor , voice actor and writer . He is one of the most important representatives of international auteur films and the New German Cinema . Time magazine named him one of the hundred most influential people in the world in 2009.

Werner Herzog grew up in the Bavarian village of Sachrang not far from the border with Austria . The family fled there before the bombing raids on Munich . At the age of twelve he moved to Munich with his mother Elisabeth Herzog (née Stipetić, 1912–1984) , who came from a Croatian officer family. At the age of 14, Herzog converted to Catholicism . His father was Dietrich Herzog (1910–1989). His paternal grandfather was the philologist Rudolf Herzog , who gained fame through the excavation of the Asklepieion on the island of Kos . Werner Herzog has an older brother Tilbert Herzog and a younger half-brother Lucki Stipetić, who works with him as a producer to this day, as well as a younger sister Sigrid Herzog , who is a director. In his childhood he did not know any cinema until he saw his first film in the village school at the age of eleven.

For a short time he lived with his family in the Elisabethstrasse in Munich with Klaus Kinski , who already attracted attention with eccentric airs at that time . While he was in high school, Herzog worked night shifts as a spot welder in a steel factory. He graduated from the Maximiliansgymnasium in Munich and, in addition to his first film productions, studied history , literature and theater studies at the University of Munich . Werner Vordtriede was one of his teachers. A scholarship , which he broke off after a week, brought him to Pittsburgh in the United States .

In 1962, at the age of 19, Herzog published his first film, the twelve-minute short film Heracles . In 1963 he founded his own production company "Werner Herzog Filmproduktion" in Munich. Herzog made his first full-length feature film Lebenszeichen at the age of 24. For this film he received financial support from the Young German Film Board of Trustees . For this he was awarded a German Film Prize in the “Best First Film” category. The film was released in 1968.

At the end of 1974 he walked from Munich to Paris in 22 days to visit the sick film critic Lotte Eisner and thus - in his view - save her; about it he wrote the book On Walking in Ice ; he also spoke the corresponding audio book.

At the 2010 Berlin International Film Festival, Herzog was jury president. In 2012 he was awarded the Federal Cross of Merit, 1st class.

From Herzog's first marriage comes the son Rudolph Herzog, who also works as a director, screenwriter and producer. A daughter comes from a relationship with actress Eva Mattes . Herzog entered into a second marriage in 1987, and a son was born in 1989. In his third marriage, he has been married to the photographer Lena Herzog since 1999. 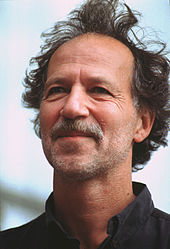 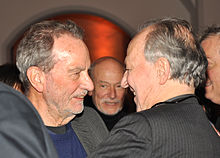 Werner Herzog with his laudator Edgar Reitz at the award ceremony of the City of Munich's Cultural Prize, 2015

Werner Herzog shot many of his films in English. He starred in five of his most famous films with Klaus Kinski . He made the documentary My Dearest Enemy in 1999 about the often difficult relationship between the two .

In addition to his feature films, Werner Herzog's work also includes numerous documentary works. After Cobra Verde , he made only a few feature films, but numerous documentaries for television and cinema. In earlier years he also made documentaries on a regular basis. In perhaps the most remarkable of these, Gasherbrum - The shining mountain over a double 8000m ascent by Reinhold Messner and Hans Kammerlander , Herzog's understanding of the documentary is expressed: He refuses direct cinema and the assessment that cameras can reproduce authenticity . Rather, the documentary works are always about your own perspective on the object, i.e. Herzog himself. This goes so far that he puts words and sayings in the mouths of some documented people and also strongly aesthetizes the work.

The short film Werner Herzog Eats His Shoe documents Herzog's redemption of a bet. Herzog thus encouraged Errol Morris to actually finish his first film Gates of Heaven . Herzog boiled his shoes and ate one of them down to the sole. Directed by Les Blank , who later became a much-praised documentary about the arduous filming of Fitzcarraldo turned (Burden of Dreams) .

In the mid-1980s he turned to opera and made his debut in 1985 with the production of Ferruccio Busoni's Doctor Faust at the Teatro Comunale in Bologna . He became known for his performances of Wagner , especially Lohengrin at the Bayreuth Festival in 1987, and Beethoven's Fidelio at La Scala in Milan .

In 2009, Herzog's films Bad Lieutenant - Cop Without a Conscience and A Caring Son were invited to compete at the 66th Venice Film Festival . This makes Herzog the second filmmaker to compete for the Golden Lion with two works .

On September 18, 2012, Herzog directed a concert by the American rock band The Killers in New York. The concert was broadcast live on the internet.

On the New York Whitney Biennial in 2012 led Duke, the video installation Hearsay of the Soul ( hearsay of the soul on). In 2015 the work was shown in a special exhibition in Cologne .

While working on his film Aguirre, the Wrath of God , Herzog tried to get seats for himself and his filming team on the later crashed LANSA flight 508 at Lima Airport on December 24, 1971 , but in vain: after all of them the day before Flights on this route were canceled due to the weather (he and his team were originally booked for the 23rd as well), the flight on the 24th was booked out, so he avoided the disaster. Decades later, after personal conversations with Juliane Koepcke , the only survivor of this flight, he shot his documentary Juliane's fall in the jungle , published in 2000, about this accident and Koepcke's rescue.

In the 15th episode of the 22nd season of the Simpsons , he lent his voice to a German pharmaceutical company in the English original and in the German dubbing .

The Dutch author and biologist Maarten 't Hart accused Werner Herzog of cruelty to animals in 2010. Herzog had consulted 't Hart for the film Nosferatu , but against his advice had a mass scene with rats carried out. The animals were colored black at Herzog's request, in connection with this they were dipped in boiling water. According to 't Hart, 50% of the rats were killed.

Werner Herzog has taken on the role of client in the Star Wars series The Mandalorian from Disney . 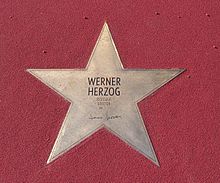 Werner Herzog's star on the Boulevard der Stars in Berlin

Boulevard of the Stars

Order of Merit of the Federal Republic of Germany